FINNISH freight operator VR Transpoint piloted operation of an 830m 6000-tonne freight train consisting of 66 wagons and two Siemens Vectron locomotives at the end of March, a development which VR hopes will improve the flow of rail freight from Russia. 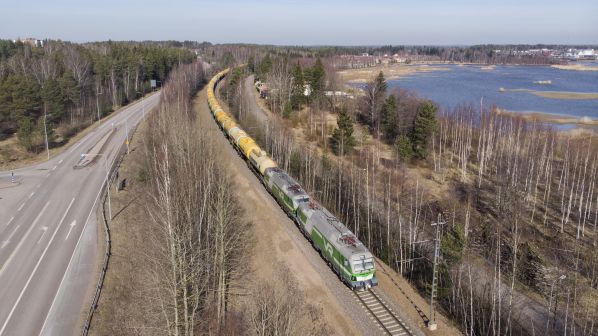 The train operated from Vainikkala yard on the border with Russia to Hamina port.
Photo Credit: VR Group

The train ran from the yard and the Finland-Russia border station at Vainikkala to Hamina port.

Currently freight trains of similar consists, which are common in Russia, are split when arriving in Finland. However, the availability of the 6.4MW Sr3 Vectrons, 80 of which are on order from Siemens and are now in use on transit freight services in southeast Finland, and infrastructure improvements at Vainikkala, which handles the majority of Finland-Russia traffic, is facilitating the operation of longer freight trains.

Improvement work at Vainikkala consisted of installing three additional 1100m sidings at the yard. Two existing sidings were extended and a new siding added, taking the total number of 1000m or longer sidings to six.

This work was completed in September 2019 and is helping to speed up traffic flows by enabling the facility to receive and handle more longer freight trains at the same time. In addition, dispatching and train handling technology has been improved through the replacement of a relay-based system installed in the 1970s.

“It’s great that we are able to increase the size of trains used in Finland, and thus make freight transit and transit routes in Finland even more efficient,” says Mr Tero Kosonen, sales and marketing director at VR Transpoint . “Trains of similar size arrive from Russia in Finland on a regular basis, but we have to increase the efficiency of transit transport.”