THE first container train from China to Britain arrived at DB Cargo’s London Eurohub terminal in Barking on schedule on January 18, having left Yiwu in the eastern Chinese province of Zhejiang, southeast of Shanghai on 1 January. 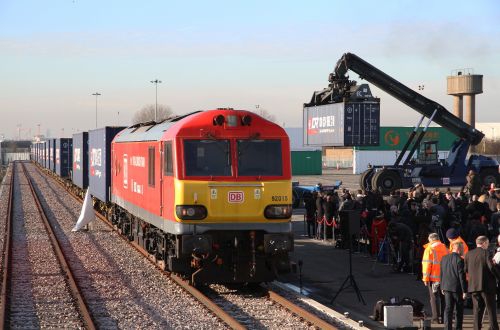 The test train was loaded with 34 containers (68 TEU) containing consumer goods and clothing from wholesale suppliers and manufacturers. Yiwu is the location of China's largest wholesale markets with over 70,000 companies operating in the city. Because of this, Yiwu is now the leading city with international rail freight connections in China with eight regular services to European destinations.

The train was operated by the InterRail Group, a multinational transport operator based in Switzerland, on behalf of Chinese Railways subsidiary China Railway International Multimodal Transport (CRIMT). It was greeted with a ceremonial ‘arrival’ at 13.00 in Barking in front of invited guests and media organisations from around the world.

Minister Mr Zhu Qin from the Chinese Embassy welcomed the operation of the train on behalf of the Chinese government, adding that it demonstrated Britain’s importance in China's One Belt-One Road strategy and that the new rail link will improve trading relations between the two countries.

The containers on the train were transhipped three times en route for operational reasons. The train was routed from Yiwu to Dostyk in Kazakhstan, where the containers were transferred from standard-gauge Chinese wagons to 1520mm-gauge wagons for the journey across Kazakhstan, Russia and Belarus.

The containers were transhipped again on arrival in the EU at Malaszewicze near Terespol in Poland and continued their journey to Duisburg in Germany, where they were transferred to DB Cargo-operated wagons approved for use in the Channel Tunnel and on the High Speed 1 (HS1) link to London.

Operation on HS1 was based upon the procedures used for DB Cargo’s regular Ford block trains from Valencia to Barking. The train being split into two parts at Dollands Moor yard at the British end of the Channel Tunnel and ran as two trains for the remainder of the journey over HS1 to Barking. This is because gradients on HS1 limit the maximum freight load on the line to 1100 tonnes.

Freight trains carrying containers from China to Europe have been operating for much of the last decade following test trains between China and Germany in 2008.

The InterRail Group, which already operates container trains linking Chinese cities with Duisburg, Madrid, Afghanistan and Riga, hopes to make London a further regular operation both for imports to Britain and exports from Britain to China.

Rail transport in around 18 days from China to Britain costs around a tenth of the cost of air freight, which would typically take 3 days, but at $US 5000 per container is more costly than shipping, which takes around 36 days and costs around $1000.