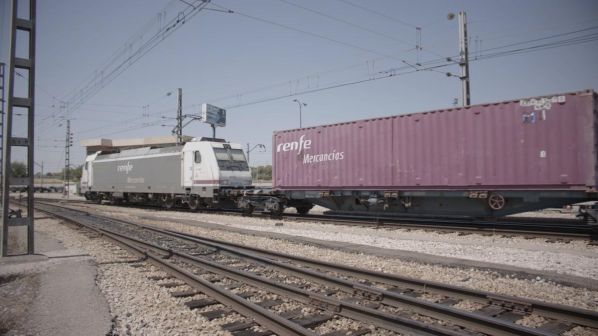 SPAIN’s Ministry of Transport, Mobility and the Urban Agenda (Mitma) has announced the start of a pilot project to move grain from Ukraine by rail, using standard maritime containers that have received special linings for the task.

A train operated by the freight division of national operator Renfe departed from the Abroñigal terminal in Madrid on August 9, carrying 25 empty 40ft containers.

Routed via Ludwigshafen, Duisburg and Lodz, the containers are expected to arrive during the fourth week of August at Chelm in Poland, 25km from the border with Ukraine and connected with that country by 1520mm-gauge track.

The containers will be loaded with 600 tonnes of maize from Ukraine, and then moved from Chelm to the Kombiverkehr terminal in Lodz by DB Cargo Polska.

They will return to the Can Tunis terminal in Barcelona via Lodz and Duisburg, expected to arrive early in September after having made a round trip of 2400km.

The trial is being undertaken as shipments resume from Ukraine’s Black Sea ports, and Mitma says that the project will determine the capability of rail to assist with the task of moving grain to markets in western Europe.