Eight trains a day will deliver and remove materials needed for the new London-Birmingham line. 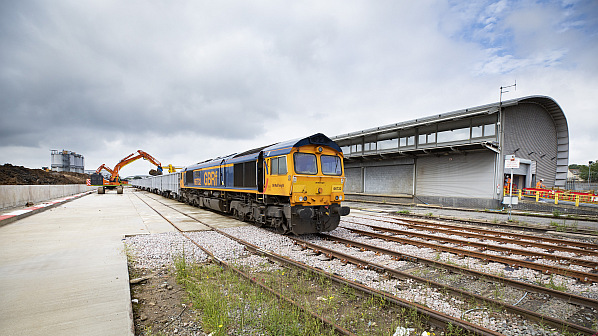 first loading to take away muck to be recycled and reused around the country
Photo Credit: HS2 Ltd.

THE logistics hub for HS2 was officially opened in Willesden, north London, on September 14.

The 30-acre site is where the estimated 5.6 million tonnes of spoil from the 41.8km of tunnelling in the British capital will be processed before being transported by rail to three sites - Barrington (Cambridgeshire), Cliffe (Kent) and Rugby (Warwickshire), where it will be used for redevelopment in projects including house building.

As well as transporting spoil, critical construction components such as 100,000 pre-case tunnel segment rings will be delivered to the site by rail before being used in the construction of the new high-speed line, which is due to open in 2029-2032.

The hub has been constructed and will be operated by HS2’s main work works civils contractor, Skanska Costain Strabag joint venture (SCS JV).

At its peak, there will be eight trains per day serving the hub, saving one million lorry movements.

A bespoke rail logistics software solution to manage and track the railway materials moving in and out of the site has been developed by 3Squared.

The hub is located on a former freight terminal first opened in 1967, and which was later converted to handle Channel Tunnel traffic before falling into disuse in 2005.

GB Railfreight will operate the logistics trains, with the first leaving the site in June, taking 1470 tonnes of spoil to Barrington. To mark the site’s official launch the operator named two locomotives.

Mr Nick Coles, Network Rail programme manager said that currently around 60 freight trains a week are running in the UK for HS2.