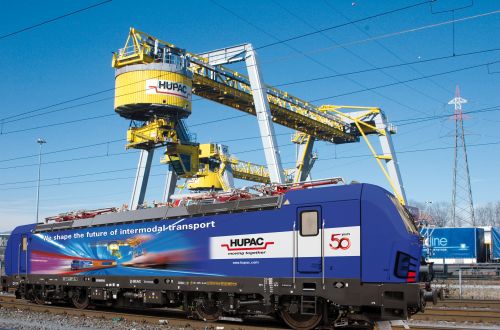 Around 110 trains a day were in operation throughout Europe and to Russia and the Far East. In its core market of transalpine consignments through Switzerland, the increase was even higher at 19.4% to 450,862 units, which was due in equal measure to its key Shuttle Net division and its new Company Shuttle Division.

Hupac president Mr Hans-Jörg Bertschi noted at the press conference that this growth is contributing to Switzerland’s modal shift policy. “For the first time in 20 years, less than 1 million trucks crossed the Swiss alps by road, thanks to Hupac,” he says.

All sectors contributed to this result. Operation of trains through the Gotthard Base Tunnel, which opened to commercial traffic last December, is running smoothly according to Bertschi, but the full benefit will not be realised until the Ceneri Base Tunnel is completed in 2020.

Hupac says it plans to continue investing in new terminals, wagons and rolling stock, confirming it has ordered eight multi-system Siemens Vectron locomotives, with delivery due to start in May 2018. Bertschi says this is important for ensuring seamless cross-border operation across Europe, pointing out however that there is still a great deal of work to do on international cooperation agreements for train path allocation and punctuality.

Another challenge facing Hupac this year will be a six-month closure of the Bellinzona - Luino line. This key freight link between Switzerland and Italy is being upgraded as part of the project to create a transalpine rail corridor for 4m lorry semitrailers on the Gotthard route.