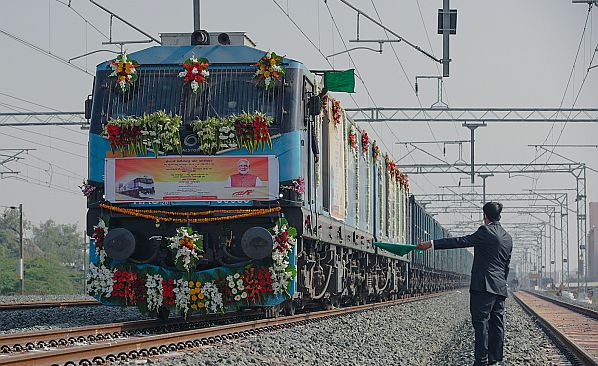 The first train is flagged away on the Bhaupur - Khurja section of India's Eastern Dedicated Freight Corridor.

This is the first section of the Eastern DFC to be completed. About 40% of freight travelling on existing lines will transfer to the new line within the next two months.

The Eastern DFC will run from Ludhiana in Punjab to Dankuni in West Bengal, while the 1506km Western DFC will connect Mumbai with Dadri in Uttar Pradesh. So far, only the 306km Rewari - Madar section of the Western DFC has reached the commissioning stage.

According to Dedicated Freight Corridor Corporation Limited (DFCCIL), the 335km Madar - Palanpur section of the Western DFC and the 137km Mughalsarai - Sonnagar and the 46km Khurja  -Dadri sections of the Eastern DFC will open in 2021, with completion of the remainder of the two lines scheduled for 2022.

India’s plan to build two DFCs totalling 3381km has witnessed several time and cost overruns since its conception in 2006. The cost of the project was estimated at Rs 290bn ($US 4bn) in 2007, but rose to Rs 600bn by 2010 and Rs 815bn by 2012, excluding the cost of land acquisition. The total cost is currently estimated to be above Rs 1 trillion.

Project completion deadlines for the two lines have similarly been extended from 2012 initially to 2018, with final completion now planned for 2022.

Frequent changes in top management and complications over land acquisition have been the main cause for the delay. For example, since DFCCIL was set up in 2007, it has had 13 managing directors.