New railway is expected to boost coal exports from Mongolia to China and beyond. 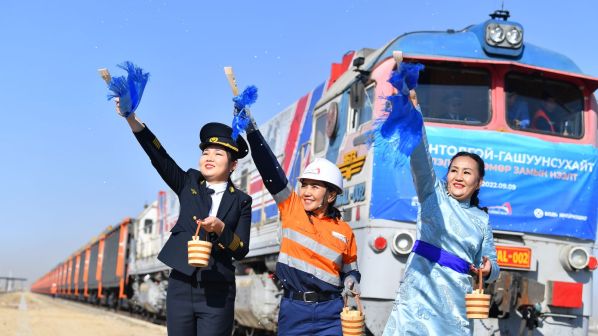 OPERATION of the 258km Tavantolgoi - Gashuunsukhait railway in Mongolia commenced on September 9 following a commissioning ceremony held at Tavantolgoi station in the Gobi Desert.

The line connects Tavantolgoi in southern Mongolia, an area rich in minerals, with Gashuunsukhait-Gantzmod on the border with China, the main terminal for Mongolia’s coal and copper exports. The project creates the second cross-border railway connection from Mongolia to China after the two countries agreed to connect the terminal to the Chinese standard-gauge network along with a long-term coal supply contract last month.

Construction of the 1520mm-gauge Tavantolgoi - Gashuunsukhait route started in 2012 but was paused due to financial difficulties. Work restarted in August 2018 under the direction of Khurelsukh, who was Mongolia’s prime minister at the time and as president has prioritised boosting economic growth through mineral exports. Trial operation on the line began in July.

Bodi Construction, Mongolia, was responsible for overseeing construction of the railway working alongside 62 subcontractors. Services on the route are operated by Tavantolgoi Railway.

There are two stations on the line as well as 16 bridges, including a 430m-long span that is the longest railway bridge in Mongolia.

The line has been built for 25-tonne axleloads and is expected to carry 30-50 million tonnes of coal as well as other freight every year. Studies have estimated that the railway will reduce the cost of shipping coal by around four times compared with road as well as significantly reduce noise and dust pollution. Coal exports from the area are expected to double or triple.

Khurelsukh said during the ceremony that to further increase exports it is necessary to complete the border connection with China as well the 416km Tavantolgoi - Zunbayan line, operation of which was also expected to begin in 2022 following successful tests operation in March. Work on the 226km Zuntolgoi - Khangi railway got underway earlier this year while construction is also underway on a 22km line to connect the Tavantolgoi - Gashuunsukhait line north to the Tavantolgoi - Zunbayan line, providing a connection from the mining region to the wider Mongolian network.

Traction on the line is provided by 16 EMD SD70ACeLW diesel locomotives, supplied under a contract signed with Progress Rail in March 2021. United Wagon Company, Russia, has provided 810 type 12-9853 gondola wagons for coal transport.