Capacity constraints are limiting the potential for further growth. 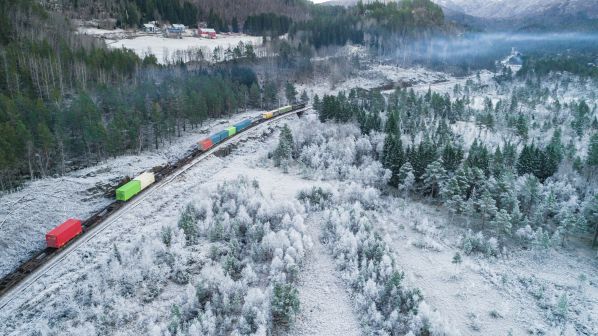 While freight traffic on the Bergen line line increased by 16%, Bane Nor says congestion line is " at the breaking point."
Photo Credit: Shutterstock/Marius Dobilas

RAIL freight traffic on the Norwegian network increased by 12% in 2021 with volumes rising by more than 20% on some routes, according to figures published by infrastructure manager Bane Nor on January 31. However, Bane Nor warns that capacity constraints on some routes severely limit the potential for further growth.

There was also significant growth on busier routes: volumes climbed 19% on the Oslo - Trondheim Dovre Line to 1.78 billion tonne-km and 18% on the Trondheim - Bodø Nordland Line to 1.39 billion tonne-km. However, volumes declined 3% on the country’s busiest freight route, the Norwegian section of the heavy-haul line from the port of Narvik to Kiruna in Sweden, where traffic was severely disrupted by the derailment of an iron-ore train near Gällivare, Sweden, in November.

Bane Nor says key freight routes, including the Oslo - Bergen line and the Dovre Line have “reached breaking point.”

“We want capacity for more and longer trains with reduced transit times,” says Mr Are Kjensli, CEO of the Norwegian Logistics and Freight Association (NHO LT). “A proper boost for rail freight requires greater investment in the development of infrastructure. First and foremost, this means more and longer passing loops, and upgraded and streamlined terminals.”

Bane Nor says additional passing loops are required to boost capacity on the largely single-track network, although some improvements are already underway. These include a project to increase freight capacity on the Nordland Line, which is due to be completed in the autumn, and the expansion of terminals at Narvik and Bergen to accommodate longer trains. New cranes will also be installed at the Alanbru terminal in Oslo.