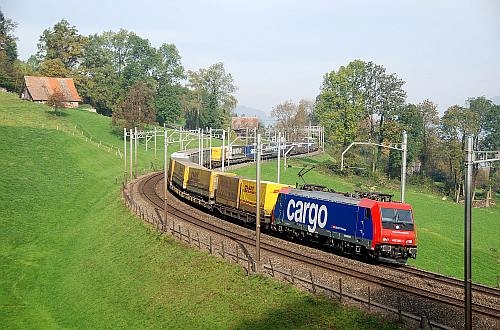 The project will upgrade this key freight link between the Swiss border and northern Italy to accommodate semitrailers with a 4m corner height, and is an important part of the Swiss Federal Council's plan to create a continuous 4m corridor from Basle to Northern Italy via the Gotthard Base Tunnel, in line with its modal shift policy.

The agreement also includes a provision for Italy to spend €40m on upgrading the line between Chiasso and Milan. The work mainly involves increasing the loading gauge in tunnels and modifying platform canopies at stations.

This division of financial responsibilities between the two parties was described by Leuthard as being "fair". The agreement is based on a decision made by the Swiss parliament at its winter session to invest €228m in Italy. The next stage will be to transfer the sum of €120m to Italian infrastructure manager RFI under an agreement to be signed with the Swiss Ministry of Transport.

Under the terms of the agreement, the work on both lines should be finished by the end of 2020, when the entire Gotthard base tunnel project including the Ceneri tunnel is due for completion. This will allow the carriage of 4m semitrailers on the entire route through Switzerland to Gallarate/Novara via Luino and Milan via Chiasso.

At present the only 4m rail corridor though Switzerland is the Lötschberg – Simplon route, where capacity is almost exhausted.