Prose has conducted a feasibility study into the phased automation of a narrow-gauge light rail line in Switzerland as part of a major upgrade. As Sandro Napoli, senior consultant at Prose explains, the project is expected to pave the way for future narrow-gauge railway automation in Switzerland. 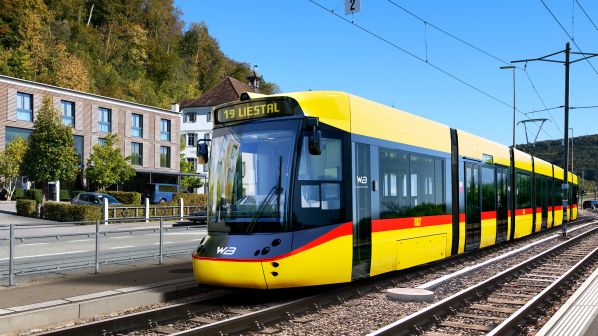 In 2012, the Swiss federal government and Swiss Federal Railways (SBB) decided to expand Liestal station to four tracks, which meant adapting the Waldenburg Railway’s infrastructure. To ensure long-term benefits from this investment, the project will not only modify the track layout at Liestal station but also convert the track gauge of the entire Waldenburg Railway from 750mm to metre-gauge. Stadler will supply 10 LRVs for delivery between April 2019 and the end of 2021, with the fleet entering commercial service in December 2022. The signalling, together with the 13 stations on the line, will also be renewed.

The total renewal of the Waldenburg Railway offers a unique opportunity to take advantage of technologies for automated operation. Baselland Transport (BLT), the operator, plans to introduce Automatic Train Operation (ATO) on the line starting with Grade of Automation 2 (GoA2) from 2022 onwards, migrating to GoA3 from 2027 and GoA4 (driverless operation) from 2032.

A feasibility study into the automation of the line was carried out by Prose based on the four grades of automation levels established by the International Association of Public Transport (UITP). An economic analysis showed that GoA2 already allows the implementation of many system improvements, whereas the next grade, GoA3, is particularly costly.

To establish a solid basis for the feasibility study, a broad initial phase and a deeper analysis phase preceded the core feasibility analysis.

An initial survey of the Waldenburg Railway’s infrastructure provided an overview of local conditions and identified geographical points requiring special attention to introduce driverless operation. Additionally, a market survey gave an overall view of solutions for partial and fully-automatic train operation, as well as the technologies and sensors in use. During this work, the focus was on the following topics:

To offer a bigger picture, experience from the automotive industry regarding technology, certification and safety was also considered.

Both the Swiss train operation rules (FDV) and the implementation rules for Switzerland’s railway regulations (AB-EBV) were examined to identify contradictions with existing standards concerning driverless operation. Our technology analysis is based on a market survey and includes potential systems and technologies and their possible combinations. The current state of development for these technologies including their characteristics, development, cost, availability and application areas were investigated. In this context, the analysis focused on systems such as automatic train protection, platform security equipment, collision warning systems, and sensor technologies. General safety requirements were defined and applied to the Waldenburg Railway based on existing definitions of operational functions and standards for metro systems.

For the final feasibility study, the results serve as a basis to develop a recommended step-by-step approach to implement automated operation on the Waldenburg Railway. In parallel, new findings continuously flow into the requirements for new rail vehicles and planning guidelines of the new infrastructure.

A particular challenge on the Waldenburg Railway is the so-called “red mile” in the town of Oberdorf, where trams are driven on sight. On this section, the driver has full responsibility for stopping the tram if he or she can see obstacles ahead to avoid collisions with road vehicles and pedestrians. On the one hand, it will be particularly challenging to implement driverless operation on this section, but on the other hand it can serve as a precedent for similar situations on other railways.

The market survey showed that alternative platform security systems, such as the one deployed on the Nuremberg U-Bahn, needs to be analysed because platform screen doors (PSDs), as normally used in metros, cannot be implemented on the Waldenburg Railway given that there is open access to the public. During a visit to Nuremberg, this alternative and very promising solution was analysed in operation and the operator’s experiences were integrated into the market survey.

Following a deep analysis of common regulations and standards, contradictions concerning driverless operations were identified. When the AB-EBV regulation is applied to possible future scenarios, it is possible to predict several non-trivial contradictions, especially relating to GoA3 and GoA4.

By law, two train protection systems are allowed in Switzerland: ETCS for standard-gauge lines and ZBMS, a standard developed specifically for narrow-gauge lines based on ETCS components.

As no adaptations to AB-EBV are currently envisaged, the certification of a new, automated system would therefore be based on an exception according to Article 5 of the EBV.

The technical compatibility of both ETCS and ZBMS with the different levels of automation was analysed. ETCS is designed for interoperable, cross-border rail operations and therefore offers more functions than ZBMS, while ZBMS was developed for metre-gauge railways as ETCS is too expensive for small closed systems. While the first standard-gauge railway is operating with ATO over ETCS Level 2 at GoA2 on a section of the Thameslink line in London, a solution for GoA3 or GoA4 over ETCS does not yet exist. Given the suboptimal cost-benefit ratio and no significant advantages in ETCS-based automation for an isolated system like the Waldenburg railway, a solution based on ZBMS train protection is more viable.

Following the market survey, four sensor technologies were compared in detail: camera, radar, light detection and ranging (Lidar) and Hall effect sensors. These sensors can increase safety by surveying the areas around the platform and vehicle.

Combining all four sensors in the system will utilise the strengths of these respective technologies most effectively, compensating for any weaknesses in the system and offering sufficient redundancy. Intelligent algorithms are needed to process the data, which, in a later step, require powerful computers and comprehensive long-term testing.

The infrastructure analyses and the findings of the studies of regulations and standards served as input for the safety analysis. Most of the safety requirements for the systems are defined in existing standards for peoplemover systems, including metros, such as EN 62290 and IEC 62267. But their applicability to the Waldenburg Railway is limited. For this reason, the driver tasks defined by the FDV were used to develop corresponding safety requirements for both infrastructure and vehicles.

The feasibility study enabled the client to plan a future-orientated investment for the total renewal of the Waldenburg Railway, as well as a stepwise and scalable introduction of new technologies to achieve automated operation. The objective is a technically, geographically and  chronologicallyphased development which involves introducing driverless operation based on ZBMS and the findings of the study. However, these steps still require developments in train protection, platform surveillance systems, sensor technologies and their integration into the overall system.

Thanks to the automotive industry, affordable sensor technology is available that can be adopted and adapted to railway applications to minimise development. However, specific railway requirements, such as train protection and platform surveillance, require bespoke development. In such cases, the main challenge is not the development of the technologies themselves, but rather the development of the appropriate software to integrate systems, and above all, their certification.

Specific measures were defined to achieve step-by-step the geographicallylinked GoA levels in four areas of interest. For the first area, the ZBMS train protection system will be further developed and implemented by the Swiss Public Transport Association (VöV). This will ensure a common solution based on one train protection system which will serve as a Swiss standard for all metre-gauge railways.

A quick win was achieved for the vehicle sensors during the feasibility study. The first pilot project began with the aim of certifying an anti-collision system that intervenes in the rail vehicle’s controls. Further steps in this area include tests and the development of algorithms for sensor integration and certification with similar phases planned for the development and certification of the platform security systems. The fourth area initially connects the individual systems by integrating vehicle sensors and platform systems and, in a second step, by controlling the unmanned vehicle to achieve GoA4.

This approach offers the advantage of facilitating parallel individual development and therefore the consideration of different drivers throughout the process. To anticipate fast technological development, the measures are bundled into five-year steps with corresponding intermediate goals. All the developments require close collaboration between operators and the industry.

While the goal of the study was to assess the feasibility of automation as part of a complete renewal of the railway with a gradual introduction of innovative technologies, the biggest challenge was to find a technical solution which is acceptable to the safety authorities.

An investigation of train protection systems defined in the Swiss regulation regarding technical compatibility with ATO and the different GoA levels confirmed that automation of the Waldenburg Railway is technically feasible.

An analysis of the operation (FDV) and implementation rules according to the AB-EBV railway regulation also demonstrated non-trivial contradictions. With no adaptations of AB-EBV envisaged, certification of a new, automated system will therefore rely on an exception according to Article 5 of the EBV. Given that the safety requirements for a peoplemover can only be partially implemented on the Waldenburg Railway, the safety requirements were finally deduced from the defined tasks of the driver.

On the other hand, a detailed examination of sensor technology found that the use of a combined sensor package including camera, radar, and light detection and ranging (Lidar) is mandatory not only for GoA3 and GoA4, but also to compensate for system weaknesses while offering sufficient redundancy and an increase in safety. Intelligent algorithms, longterm tests and safety approval certificates will be crucial during implementation.

The findings of the study will pave the way for the development and introduction of ATO based on ZBMS with an appropriate sensor package on light rail lines in Switzerland.