Swedish operator SJ is already recognised as one of Europe’s leading digitalised companies. Kevin Smith spoke with Claes Lindholtz, SJ’s director of business development and digital transformation, about the operator’s approach to digitalisation and the secrets of its success. 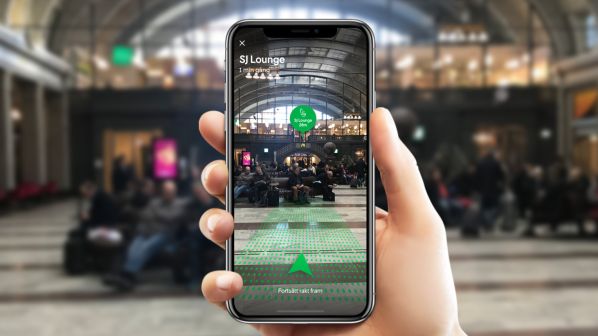 SJ’s app now includes augmented reality to assist passenger wayfinding. This is one of the early results of the SJ Labs customer engagement scheme.

WHEN it comes to embracing digitalisation and becoming more tech savvy, railways and public transport companies are generally behind the curve. Telecoms, retail and consumer products firms regularly come out on top when comparing Europe’s most digitalised companies. They are praised for mastering their understanding of customer behaviour, business value and technology opportunities.

However, Swedish passenger operator SJ is bucking this trend. The company was recently ranked second in management consultancy BearingPoint’s Digital Leaders in Sweden 2019 study, rising from 21st place in 2018. SJ also secured the accolade of Europe’s most digitalised travel company in the consultancy’s continent-wide study.

Securing this status is by no means an accident. In 2017 SJ CEO Mr Crister Fritzson set the operator the ambitious target of becoming Sweden’s most digitalised company within five years. That’s more digital than Spotify and more digital than Ikea.

Mr Claes Lindholtz, SJ’s director of business development and digital transformation, told IRJ that embracing digitalisation is considered critical to securing the company’s long-term profitability and competitiveness. He also revealed that the operator’s approach is underpinned by three key understandings:

“Based on these three insights, we set ourselves the goal of becoming the most digital company in Sweden in five years,” Lindholtz says. “It is kind of a big statement for a railway company. But I think you really need to focus on this and let the organisation know that this is for real, that this is not something we will do on the side. Digitalisation will affect us all and we need to take it seriously and make the most of it.”
Lindholtz says, SJ approached the challenge by dividing its work into three specific phases:

The operator is currently working on the first wave, which involves establishing new capabilities in Big Data and analytics, automation and processes such as predictive maintenance through a variety of projects and workstreams.

Among the early deployments of new technology is the use of virtual reality training rooms at locations across Sweden to localise and improve the efficiency of the training process for onboard staff and drivers; deploying robotic process automation (RPA) technology to replace menial tasks usually performed by humans such as answering incoming emails, processing and transferring data from one system to another and processing group travel bookings; using additive manufacturing to 3D print spare parts; harnessing augmented reality to guide customers using the SJ app; and deploying IoT-based technologies on trains to monitor performance.

“With all of the sensors we are installing, all the facilities we are building into Big Data and analytics as part of Wave 1, we will have so much more capability to create new ways to serve our customers,” Lindholtz says. “We think that each wave will feed the next wave. That is the framework of our digitalisation journey.”

Lindholtz anticipates work on the first phase to continue for another 18-20 months, with SJ shifting to developing new customer touch points in 2021. This phase is expected to take a further two years with the shift to a new business model expected in 2023.

“It is too early to say what this might look like,” Lindholtz says. “It is something that is likely to accumulate the usable data we have and use it in an innovative way to build the offer and exactly how we sell our core product.”

Inevitably SJ is engaging with new tech companies to access many of the digital technologies and processes that it is deploying in Wave 1. This includes Vobling to develop the VR platform for staff training and Avo Consulting on RPA applications. SJ is also engaged with the Epicentre accelerator in Stockholm both as a means to keep in touch with the start-up community and to offer a fresh perspective on work for SJ staff. “We have built a train carriage there where participants can sit and work and have access to our people,” Lindholtz says. “We aren’t currently engaged in any joint operations with any of the start-ups there, but when we get to customer touchpoints, we expect to do more.”

While it is relying on the tech sector to deliver new technologies, and PWC helped SJ to get the digital transformation process up and running, the initiative is now drawing entirely on internal resources.

The company does not have a conventional digital strategy with a digital office or department but considers digitalisation at the heart of everything the operator now does. The biggest proponent of the transformation according to Lindholtz is the CEO, Fritzson, which is helping to emphasise the importance of the strategy at all levels of the company.

To bridge any management knowledge gap, SJ has both recruited people from other companies and industries who have experienced similar digital transformations, and is working to upskill its existing employees. For example, SJ management have studied best practice from white papers and presentations at conferences, and met extensively with other European firms working in the automotive, insurance, media and furniture industries to learn how they are managing similar transitions.

“We put a lot of effort into getting knowledge from others,” Lindholtz says. “We believe that by doing so, it provides us with the best opportunity to learn as quickly as possible what to do and what to avoid when we are going through our own transformation.”

One of the most important lessons learned from this process according to Lindholtz is the ability to move fast and be agile; to know when to drop a certain project because it does not offer sufficient value, or when it does to proceed quickly. SJ’s management also recognised the importance of getting staff onboard and engaged as critical to digitalisation success.

As a result, SJ is investing as much in employee development as it is in new technology. Lindholtz offers the analogy of offering a person walking to a destination a new bike in order to speed up their journey. While the bike offers greater speed, it is only effective if the person knows how to ride it. If they don’t, it is likely to weigh them down and actually hinder progress.

Critical to this is embracing a bottom-up approach to development. Staff ranging from those who clean or repair trains, or work in finance and administration now engage in a 12-week training programme where they are exposed to disruptive technologies such as AI, VR, drones and 3D printing. They are then encouraged to apply these processes to reinvent their everyday work.

Design thinking - which takes into account the user or consumer at all phases of development - is central to this process and is helping to evolve prototypes into actual projects, which are improving operational efficiency. SJ has also identified ambassadors for digital transformation who spread the word about the positives of the process to enthuse their colleagues.

“Digitalisation might be something people are afraid of because you may think that you are going to lose your job, the robots are taking over,” Lindholtz says. “Instead we have seen that people in SJ love our robots. We even had a robot celebration party when we launched a new robot. We have managed to transform this into something positive.”

As well as involving its staff, another secret to SJ’s success is customer involvement and “customer obsession.” The operator has established the SJ Labs app, through which it is communicating and working directly with customers to identify solutions with the goal of going from idea to launch within eight weeks.

Augmented reality for improved wayfinding was one project to emerge from the scheme. Another relates to a perennial problem identified by SJ and its passengers: delays at stations resulting from passengers trying to locate the precise coach they are sitting in after the train has arrived. With the absence of maps on platforms, and SJ having no control over major stations (which are owned by Jernhusen) and platforms (which are owned by Trafikverket) - one of the intricacies of operating on a vertically separated railway network - SJ decided to engage with its customers to find a solution more quickly than it could by engaging with the other railway companies.

Passengers were encouraged to take photographs of the platform on which they were standing and send them to SJ using a gamification application within the app. By harnessing the GPS on passengers’ smartphones, SJ was able to deploy an algorithm and machine-learning process to recreate and build virtual platforms from the hundreds of thousands of images received, to the extent that within three months the operator was able to build a digital twin of station platforms across Sweden. Now when passengers stand on the platform, they are able to use the travel mode function of the SJ app to locate the precise boarding location for their reservation.

“Co-creation is critical for us,” Lindholtz says. “It would have been so easy for us to say that we can’t do this because we don’t own the platform. I think you need to see it from a different perspective to see what we can do. So what if we don’t have the maps and the drawings? Let’s do it ourselves and do it with the customers.”

As well as BearingPoint, SJ’s progress with digitalisation is catching the attention of Trafikverket. While a little behind SJ, Lindholtz says there is a lot of potential for the operator and Sweden’s infrastructure manager to work together on digitalisation projects - whether this is SJ’s trains reporting the condition of the track, or track sensors monitoring wheelset condition. Indeed, the level of cooperation took a step forward in February, with the formation of a digitalisation group for the Swedish rail industry, which Lindholtz will chair.

With SJ taking the lead, it seems that the entire Swedish railway sector is now embracing a digital future. This process is already transforming the role of employees and providing an enhanced travel experience for passengers. And with SJ still in the early stages of the process, the best is yet to come. Other operators would do well to take notice.

“These are really exciting times for us,” Lindholtz says. “Digitalisation as a whole is a big opportunity for the railway sector. We are working hard and have a clear strategy to take advantage and give our people everything they need to be superheroes.”