Since the abandonment of Florida's Tampa - Orlando project last year, California has been left to fly the flag for high-speed rail in North America. Keith Barrow examines recent changes to the plans for this pioneering venture. 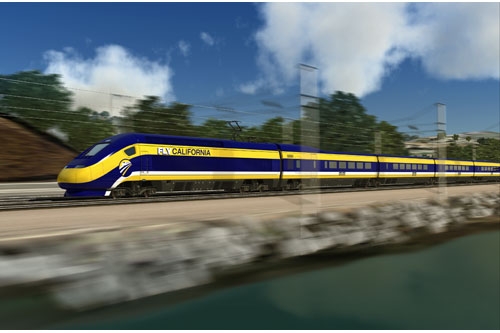 The response was emphatic - 39 states, together with the District of Columbia, and national passenger rail operator Amtrak submitted applications requesting more than $US 75bn. After decades of underinvestment in passenger rail, states were eager to seize a rare opportunity.

However, the 2010 mid-term and state elections heralded a change in the political climate that scuppered some of the largest projects. Ohio and Wisconsin elected governors who opposed investment in passenger rail, and promptly surrendered the funding allocated by Washington. They were soon joined by newly-appointed Florida governor Mr Rick Scott, who controversially rejected the $US 2.39bn federal grant for the flagship Tampa - Orlando high-speed line, even though the state was being asked to find just $US 280m.

The cancellation of Tampa - Orlando left California as the only state with a true high-speed project eligible for HSIPRP funding, and while some of the funding ceded by Ohio, Wisconsin and Florida has been redirected to the Northeast Corridor, California's specification for running trains at more than 300km/h on dedicated infrastructure mean this project stands apart from its peers.

California's linear geography, steadily-growing population, and ageing and congested transport infrastructure, make the Golden State fertile ground for high-speed rail. The first studies were completed as long ago as 1981, and the state established the California High Speed Rail Authority (CHSRA) in 1996 to take the planning of the network forward. However, the state bond issue required to finance construction was not put to a public vote until 2008, when Proposition 1A became the country's first ever voter-approved financing mechanism for high-speed rail.

With state funding available, California was able to secure federal money through the HSIPRP, and since the first tranche was approved in 2008, it has accumulated further funds from Washington thanks to the cancellation of projects in other states (see panel). Because the stimulus funding was incentivised to focus on economically-depressed areas, CHSRA and the FRA decided that the initial phase of construction should focus on the section through the Central Valley between Bakersfield and Sacramento, a region hit hard by the recession.

Another reason for selecting this section is that it will offer early benefits by enabling significant improvements to existing passenger rail services in the region before the launch of the full high-speed service. CHSRA says the so-called Initial Operating Section (IOS) will bring major enhancements to Amtrak's San Joaquin and Capitol Corridor services, Altamont Commuter Express (ACE), and potentially Caltrain, without compromising the design or integrity of the new infrastructure. It could also allow the introduction of new through services between Bakersfield and Sacramento, Oakland, San Jose, and San Francisco.

The initial section of the IOS between Bakersfield and Madera, north of Fresno, will be tendered on a design-and-build basis, and infrastructure management and maintenance will be carried out by a concessionaire. The line will be owned outright by the state.

The decision to start with the Central Valley section is controversial, with critics of the project arguing that serving the Bay Area or Los Angeles from the outset would generate a better return on the initial investment. CHSRA argues that capital costs per kilometre are significantly lower in the Central Valley than in more densely-populated areas, and points out that acquiring land now is a sensible policy in what is the fastest-growing area of California.

Upon completion of the first section of the IOS in 2017, the line will immediately be put into use for an enhanced San Joaquin Bakersfield - Stockton - Oakland/Sacramento service. This is currently Amtrak's fifth-busiest route nationally, carrying around 1 million passengers per year. This will be complemented by expanded ACE and Caltrain services to create a unified network stretching from Bakersfield to the San Francisco Bay Area and Sacramento. Services will operate at up to 200km/h on the IOS, compared with a maximum of 127km/h on the existing line. Connections will be built to the existing BNSF-owned line at both ends of the first stage of the IOS to allow trains to continue to destinations on conventional lines. CHSRA says that when the high-speed network becomes fully operational, these will become important feeder services. Planning is already underway for the interim IOS service.

With this phased approach, another important focus is what CHSRA terms the bookends: existing lines in the San Francisco Bay Area and the Los Angeles Basin that will be upgraded to support the introduction of high-speed trains between California's principal conurbations. This means costs can be shared between CHSRA, regional transit authorities, and other public bodies, while strengthening the case for major improvements to the commuter rail networks in the Bay Area and Los Angeles.

Electrification of the Caltrain line from San Francisco to San Jose has been planned for more than a decade, but the agency's financial difficulties precluded the project from advancing. However, in March a group of Bay Area public bodies including Caltrain signed a breakthrough regional agreement with CHRSA to electrify the line, install a modern train control system, and replace the train fleet using a combination of high-speed rail bond money and local, regional, and state transport funds. This deal is significant because it means the cost of upgrading the line is shared, bringing the project forward, and Caltrain aims to begin running electric trains before the end of the decade.

At the southern end of the route, Los Angeles County Metropolitan Transportation Authority is working on a strategic analysis of the Metrolink Antelope Valley commuter rail service from Los Angeles Union Station to Palmdale. The aim of this project is to identify improvements that will speed up commuter rail services in readiness for the extension of high-speed rail to Palmdale. Early investments on this line could include track-doubling, crossing improvements, and grade separation of level crossings.

An early priority for CHSRA is the second section of the IOS, which will extend the high-speed line south through the Tehachapi Mountains and close the gap between Bakersfield and Palmdale. CHSRA says it could achieve environmental clearance in early 2014, and plans are being developed quickly to create this important link in the state's passenger rail infrastructure. Proposition 1A allocates up to $US 4bn for this section and CHSRA says securing match-funding will be a high financial priority. The case for this project could be strengthened by XpressWest's proposal to extend the planned Las Vegas - Victorville high-speed line to Palmdale (see panel below). With political will at state and federal levels, this section could be operational within a decade.

Full high-speed operations will only begin once both sections of the IOS are complete. CHSRA's business plan suggests the service could be run by a private operator without subsidy, and this will attract the private investment required for the so-called Bay-to-Basin project, which involves extending the high-speed line from Madera to join Caltrain tracks at San Jose. This will allow the introduction of through high-speed services between Los Angeles and the new Transbay Transit Center in central San Francisco.

Phase 1 will conclude with the extension of the high-speed line south from the San Fernando Valley to Los Angeles Union station, although the project could expand to extend the line north from San Jose to San Francisco and south to Anaheim if funds permit.

The proposed second phase would be implemented after 2030, extending the network north to Stockton and Sacramento, and south to San Diego. CHSRA envisages a similar blended strategy with the expansion of existing services and infrastructure preceding the dedicated high-speed line.

The blending strategy has had a considerable impact on the overall cost of Phase 1. CHSRA's revised 2012 business plan puts the lowest-cost estimated for the San Francisco - Los Angeles section at $US 68.4bn (see table), a significant improvement on the $US 98.5bn it quoted last November. Most of this cost reduction comes from the decision to use existing lines to access San Francisco and Los Angeles, and deferring construction of the line south to Anaheim.

Inevitably, however, this comes with a revenue penalty, and CHSRA points out in its revised business plan that scaling back the purpose-built infrastructure will result in a system with less capacity and lower ridership. The November 2011 business plan projected between 26.9 million and 43.9 million journeys per year on Phase 1 in 2040, while the latest plan assumes between 20.1 million and 32.6 million trips, a fall of around 30%.

Such compromises are likely to become a fact of life if California is to continue carrying the baton for high-speed in North America. But as the tumultuous history of the US high-speed programme amply demonstrates, compromise is not a universal attribute, and California's flexibility may ultimately be the key to success.

November 2008: California voters approve Proposition 1A, allowing the state to raise up to $US 9bn through 30-year general obligation bonds for the San Francisco - Los Angeles - Anaheim section, and $US 950m for associated improvements to connecting conventional lines.

December 2010: US Department of Transportation (DOT) redirects $US 624m from Wisconsin and Ohio projects to CHSRA for Central Valley section.

JUNE saw the rebranding of DesertXpress, the private-sector-led project to build a high-speed line from Las Vegas to southern California, as XpressWest. The new name reflects the ambitions of the line's promoter, DesertXpress Enterprises, to push its line beyond the provisional western terminus at Victorville towards the Los Angeles basin.

Last month XpressWest and Los Angeles County Metropolitan Transportation Authority signed an agreement to cooperate on the construction of the Victorville - Palmdale section, and the extension of high-speed services over the conventional network. Trains from Las Vegas would initially terminate at Palmdale, where they would connect with the Metrolink commuter rail services to Los Angeles, and in the longer term with the California High-Speed Rail line from Bakersfield. Electrification of the line through the San Fernando Valley would ultimately allow the extension of XpressWest services to Los Angeles.

The 80km line from Victorville to Palmdale would follow the alignment of the planned High Desert Corridor highway. Work began in 2010 on gaining environmental approvals for a 152m-wide corridor between the two towns, which would accommodate both the road and the railway, although this process is not expected to be completed until the end of next year. The project is being endorsed by municipalities along the route.

This is a crucial amendment because it puts XpressWest in a stronger position to negotiate for federal funding. The Environmental Impact Statement for the 305km Victorville - Las Vegas line was approved by the United States Surface Transportation Board last November. This section of the route is expected to cost around $US 6.9bn (including rolling stock) and a 35-year $US 1.4bn loan application was submitted to the Federal Railroad Administration (FRA) last year. No cost estimate has so far been given for the Victorville - Palmdale stretch, although it has been suggested construction could run concurrently with the main section of the line.