Canadian National Railway (CN) was hit by blockades of its network in February swiftly followed by the coronavirus pandemic in March. But as CN’s president and CEO, Jean-Jacques Ruest, reveals to William Vantuono, editor-in-chief of Railway Age rather than wait for a revival, rail needs to play a proactive role in the economic recovery. 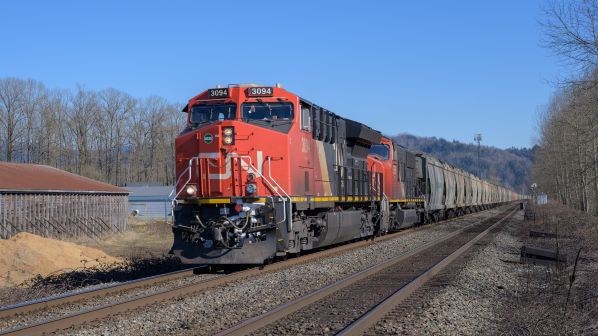 CANADIAN National Railway (CN) got off to a poor start in 2020. A protest in February by indigenous people against the construction of the 670km Coastal GasLink pipeline in British Columbia led to blockades in several key locations, which caused more than 1400 trains, including most of Via Rail’s passenger trains, to be delayed or cancelled and forced CN to shut down parts of its network.

Just after services started to return to normal in early March, the coronavirus pandemic struck causing severe disruption to the economy and forcing CN to introduce measures to protect its employees and the business.

“CN’s team of dedicated railroaders has demonstrated our ability to overcome difficult situations and keep the economy moving,” Mr Jean-Jacques Ruest, CN’s president and CEO, said on April 27. “I am very proud of how we recovered quickly in March from the service disruptions in February. Our network is very fluid, and we are continuing the temporary right-sizing of our resources to match the weaker demand caused by the global recession.”

CN withdrew its key assumptions for 2020 in April due to the high degree of business uncertainty caused by the Covid-19 pandemic. CN now plans to invest approximately $C 2.9bn this year, of which $C 1.6bn is still targeted towards track and railway infrastructure maintenance.

“We shouldn’t be sitting in the stand hoping the economy comes back, we definitely have a proactive role to play.”

Nevertheless Ruest is optimistic that the business will come back, but not necessarily in the same way as before. “The onus is on us to make it come back and we all have a role to play,” Ruest told IRJ’s North American sister publication Railway Age in late May. “It is time to pivot to growth.”

Ruest believes the rail industry must take the initiative and not simply wait for the recovery. “The rail industry needs to participate in making it happen,” he says. “We shouldn’t be sitting in the stand hoping the economy comes back, we definitely have a proactive role to play.

“On the market side, some things were going to be challenged long-term anyway. Thermal coal is one of them and was already in decline. Output in the United States is now at the same level of electricity generation as renewable energy.

“As an industry, we need to create a market pie that will grow despite the fact that some elements like thermal coal, export coal and crude oil by rail will not come back to the level they were pre-pandemic. The market was always evolving, and maybe now at a faster pace. Manufacturing will come back - it is just a matter of time - and bulk freight will come back.

“We need to go after freight which will increase the size of the industry market pie as opposed to going after each other’s market share. The consumer economy will play an even bigger role. This is already the largest part of the US and Canadian economy and GDP. Our future will be the consumer who has disposable income which generates freight demand, which tends to be an intermodal product and a market mostly dominated by the truck.”

Ruest recognises that CN needs to take advantage of technologies, such as tracking and tracing devices, if it is to grow this business. “Tracking and tracing is part of the future,” he says. “It is possible to have a low-cost device to follow the shipment as opposed to trying to download all the data, which has been a major IT problem. We have a number of these devices on chassis and containers because the cost of them has come down dramatically.

“CN moves a lot of refrigerated goods today. We sell it directly to the food companies. We know the location, temperature and whether someone has opened the door, so we can track the food safely along the supply chain. People don’t need to know all this all of the time. They only need to know if there is an exception or if there is an issue.

“We are redefining the art of what is possible. We have a couple of executives at CN who don’t come from the railway and who are doing exactly this.”

CN pioneered precision scheduled railroading (PSR) under the leadership of one of Ruest’s predecessors, the late Hunter Harrison. Ruest is a firm believer in the PSR fundamentals of not having more assets and track than needed and operating long and heavy trains. While he says you should never “drift away” from the fundamentals, he believes PSR can be enhanced by adding technology. “Think outside the box and think of the new art of the possible,” Ruest told Railway Age.

Ruest says one of CN’s strengths compared with other North American Class 1 railways is that it deals directly with intermodal customers rather than through wholesalers. “In the US, the model is to sell your services to Schneider, Hub or GB Hunt, who serve the accounts,” Ruest explains. “This limits your ability to grow the business because you are doing it through someone else who has the knowledge and close contact with the customer.

“The rail industry doesn’t want to go back to a situation where we get subsidies from the government.”

“When I joined CN more than 25 years ago, we had a direct relationship with the customers and a good understanding of what makes them use rail instead of truck - it’s called domestic retail. CN has a truck operation with more than 1000 drivers that does the local delivery, and we sell the service warehouse to warehouse including the rail service in between. To learn a market, you must be in it and the closer you are to it the more savvy you are at creating products.

“When you do business through somebody else you become many steps removed and a commodity, your pricing power is not as good, and the customer uses truck throughout even though rail might be cheaper. To be successful in intermodal you need to get a lot closer to the people who make the decisions as to which mode to use.”

Ruest recognises that the trucking industry has a huge advantage over rail, as operators do not pay the full cost of maintaining the network, while railways do, and as a result some traffic which historically went by rail now goes by road. “The rail industry doesn’t want to go back to a situation where we get subsidies from the government,” Ruest explains. “We like the freedom of enterprise - we own and control our assets and we don’t get told who runs on our assets.”

Ruest has a similar philosophy to government regulation, which is far less onerous than it used to be. “The rule of the game for the rail industry has worked well in North America, and that is why the rail industry has such a good market capitalisation - much better than for trucking or ocean shipping countries,” he says.

“Our philosophy at CN is to make sure you don’t attract too much attention, do the right thing, provide the service, be reasonable, have the capacity that the economy needs and don’t get your customers into trouble - don’t give regulators reasons to apply new restrictions on the industry.”

The road haulage industry has another advantage over rail in that it can price freight door-to-door anywhere in Canada, the United States and Mexico. Ruest says that while CN covers every city of any size in Canada, there are gaps in its network map south of the border which it would like to plug. “In order to compete with the truck we need to find ways to create a map through mergers, acquisitions and alliances,” he says.

An example of this is a deal which CN did last year with US Class 1 railway CSX and the ports of New York, New Jersey and Philadelphia to introduce a daily freight train service to Quebec and Ontario.

Despite his qualms about government funding, Ruest recognises that public-private partnerships (PPPs) have a role to play, especially for port and terminal projects, which would be too expensive for the railway to fund on its own. “PPPs allow us to a get a good return on our investment because we share the investment with other parties who also benefit,” Ruest says. “The government benefits from trade and tax income, and the port becomes more efficient and handles more cargo and revenue.” Ruest says involving the public sector in such schemes can also aid the planning approval process and helps to “ease yourself into some difficult discussions with neighbours.”

“We need to move on from this dark cloud. We have learned how to work safely and get the economy working again. It is up to every citizen to do this.”

Conversely, Ruest believes there are benefits from involving the private sector in government-funded projects. “As a result of the pandemic, all governments will look at infrastructure funding,” he says. “This funding is more successful when there is private money as well. When there is no private money, sometimes the money is invested in things which are of little use to anyone. PPPs guarantee that you will produce infrastructure that will be used. This is also very much part of how the economy needs to get back on its feet and CN is a part of this.”

CN is involved in three PPPs:

Ruest says the Milton project has gone through a five-year environmental approval process and he hopes a final decision will be made in the autumn. “Southern Ontario is becoming more dependent on consumer-derived freight,” Ruest explains. “It used to build cars, but production is gradually moving away to Mexico, off-shore or to the southeastern United States.”

Despite this, Ruest says the Ontario economy is “even bigger and stronger than it used to be” driven by consumer spending, which is generating more intermodal freight, hence the need for the new terminal in Milton.
Ruest believes the pandemic has provided the opportunity to re-evaluate plans and to accelerate change. “When the pandemic is under control, don’t make the mistake of going back to where you came from,” he says.

“We should do now the things we might have done two to three years from now. The pandemic is creating a sense of urgency for things that were going to happen anyway. We need to move on from this dark cloud. We have learned how to work safely and get the economy working again. It is up to every citizen to do this.”

This article is based on a podcast broadcast by Railway Age on May 29.