Following the introduction of digital Interrail and Eurail passes, newly-launched ticket vendor All Aboard has integrated these into its offering as part of its goal to simplify long-distance rail travel across Europe, as CEO, Anton Trollbäck, explains to David Burroughs. 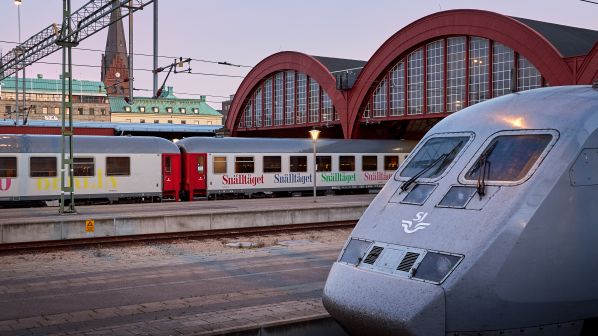 BOOKING a rail ticket across borders is often more difficult than it should be despite efforts from the European Union, operators, and others in the industry.

But a newly-launched start-up is hoping to simplify the booking process by combining tickets from operators across Europe. This system has now been further enhanced with the integration of Interrail and Eurail passes, allowing passengers to compare these with regular fares.

All Aboard was formed in Stockholm in 2019, and launched its online ticket vending service in late 2020. CEO, Mr Anton Trollbäck, says the company’s goals are twofold: to make travelling by rail in Europe as easy as possible, and to encourage people to explore new destinations in a sustainable way.

To simplify the ticket purchasing process, All Aboard has combined the ticketing APIs of various European rail operators. An algorithm compares various routes and fares before offering passengers the best fit for their journey. The most popular journeys have been curated and refined by All Aboard staff. To encourage people to look at journeys they may not have previously considered, All Aboard has created a number of pre-planned multi-day trips, such as Hamburg to Budapest, Venice to Bari, or Amsterdam to Milan. The platform also allows passengers to create and share their own examples of possible journeys, which other passengers can then easily book.

“We have a strong belief that you shouldn’t have to be a pro in order to plan a good train trip,” Trollbäck says. “So we put a lot of focus on giving recommendations on the best routes, and those are based on expert travellers.”

The integration of Interrail and Eurail passes from June 1 will enhance this process, by allowing passengers to compare these passes with regular fares in order to select the best option.

“We have a very strong digital product team and have experience doing this type of integration.”

Anton Trollbäck, CEO All Aboard

Eurail, the company providing the Eurail and Interrail Global Passes, launched a mobile pass in September 2020 that allows passengers to plan and use their tickets across 33 European countries through a single app. Developing the pass involved connecting the systems and processes of more than 35 operators into a single digital solution, taking into account the complexities of a multi-country, flexi-day ticket option.

The solution forms part of a new distribution platform which, combined with the digital rail passes, makes it easier to integrate new distributors.

“We first focussed on migrating our existing network of distributors to this new platform,” Eurail says. “That process has been completed and we are now focussing on bringing onboard new distribution partners. We are very proud that All Aboard is among the first.”

Trollbäck says integrating the Eurail system with its own systems was a swift process. “We have a very strong digital product team and have experience doing this type of integration,” he says. “We did work very closely with Eurail and their organisation and also talked to a lot of travel experts from the railway community to get their opinions on this.”

Eurail says the digital pass has proven popular, accounting for around 90% of total passes sold in recent months. The passes can be added to a mobile phone through the Rail Planner app, which allows passengers to plan their journey and keep track of their trips. The digital pass is periodically checked against Eurail’s system to ensure its validity and to prevent fraud, meaning passengers must be online at least once every three days.

Online Travel Agencies (OTAs) and rail technology providers can provide the passes and tickets through an API, while the company has also created the web-based Eurail Ticketing System (ETS) interface for third parties selling the passes from a point of sale location like a ticket window or agency counter.

The flexibility provided by the digital Interrail pass fits well with All Aboard’s mantra of helping passengers find flexible routes at cheap prices.

“We do the maths for you, and recommend the most affordable and convenient pass, for example, for families, it’s very affordable to use Interrail because kids travel free with adults.”

“When they announced the digital version of the pass, we got very excited as everything with All Aboard is digital, so we had been waiting for that,” Trollbäck says. “We had this idea of wanting to approach Interrail in a way that would be in line with how we would want to have the full customer journey.

When the customer buys the tickets through All Aboard, the site then purchases the individual tickets from the operators’ APIs before combining them into a single email, which is sent to the customer.

“We do the maths for you, and recommend the most affordable and convenient pass,” Trollbäck says. “For example, for families, it’s very affordable to use Interrail because kids travel free with adults.”

Providing better through ticketing is one issue Trollbäck points to as important for making rail easier to use, with open data set to play an important role. However, he says operators are generally getting better at recognising the benefits of sharing data.

Eurail says the company’s distribution network is an essential part of its sales strategy, with sales via third party vendors contributing significantly to the total number of pass sales.

“Third parties play a significant role in addressing specific markets and traveller segments that we cannot serve via our own, direct Eurail and Interrail online sales channels,” Eurail says. “In addition, the third party vendors can provide different entry points for Eurail and Interrail passes based on customers’ search behaviour throughout the booking process, which is becoming more and more prominent in this digital age. For example, we see opportunities for partnerships with OTA’s in overseas markets that have a strong customer base and cross-selling capabilities. Similarly, we are looking to connect with more start-up companies like All Aboard, as they often introduce disruptive platforms that target new audiences.”

The digital Interrail passes have the added benefit of being instantly available, unlike the older paper-based tickets which had to be mailed out to the passenger or picked up from a station. The passes can also be activated up to 11 months after they are purchased, meaning customers are able to hold onto them if the start of their trip is delayed.

With the introduction of the Interrail and Eurail passes from this month, All Aboard appears set to achieve its goal of making rail travel easier, and more accessible.