IRJ at InnoTrans 2014: EMD has on show a new ergonomically-designed locomotive cab to be installed in three demonstration locomotives which will be shipped to Australia next year. 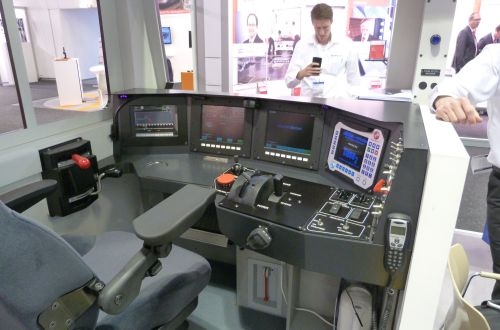 EMD initially built a mock-up to get feedback from drivers as to what would be the ideal locomotive cab. The end result, which is on show at InnoTrans, has the controls laid out logically with the most frequently used controls nearest to the driver. The seat is designed to cope with a wide range of people.

The cab at InnoTrans also includes a driver fatigue and distraction monitoring and detection system developed by Seeing Machines, Australia. Cameras detect where the driver is looking, but without being a distracting itself, to see whether the driver is drowsy or asleep, or not paying proper attention. It can transmit this information back to the control centre as well as activating a warning. EMD sees this as an enhancement to standard vigilance systems.