Tendering is underway for a contract to supply and maintain 54 360km/h trains for operation on Phase 1 of Britain’s HS2 high-speed line linking London and Birmingham as well as conventional lines to the north. As David Briginshaw explains, five bidders have been shortlisted for this demanding contract. 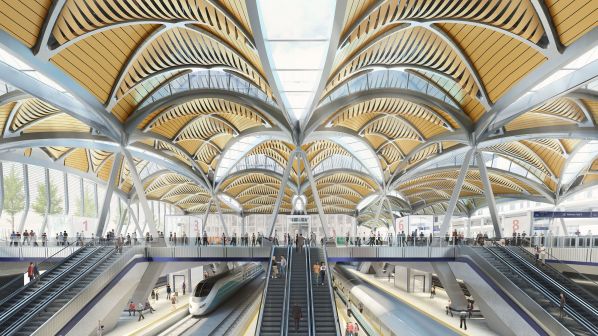 SIX organisations and five bids have been shortlisted by HS2 - Alstom, Bombardier Transportation together with Hitachi Rail Europe, CAF, Siemens and Talgo - to bid for the contract to supply a fleet of 54 conventional-network-compatible high-speed trains. Bids are due to be submitted in spring 2019 with a view to awarding the contract in early 2020.

Testing with the first trains is expected to start in 2024-25, and the fleet must be operational by 2026 in time for the opening of Phase 1 HS2 linking London Euston, Old Oak Common, Birmingham Interchange and Birmingham Curzon Street. The winner will maintain the train fleet at a new purpose-built depot at Washwood Heath in Birmingham, which will also be the location of the control centre.

A total of 49 trains are required (plus five trains for maintenance and operational spares) to run the daily HS2 timetable in 2026. HS2 plans to operate up to18 trains per hour per direction. The fleet will be deployed on services from London Euston as follows:

The maximum operating speed on HS2 will be 360km/h, which will make it the fastest railway in the world. From a starting speed of 200km/h, the new train - whether a single 200m-long set or a double 400m-long train - must be able to achieve 360km/h and cover a distance of 40km in no more than 450 seconds on straight, level track.

Some 400m-long trains will need to split and join mid-journey. To minimise the impact on journey time, the train will need to be able undertake normal station operations during this time. Two sets must be able to couple or uncouple and be ready to depart within 2 minutes.

HS2 requires a design that minimises whole-life environmental impact, in particular with respect to carbon and noise emissions and resource efficiency, including sustainable sourcing of materials, and a maintenance regime offering “exceptional levels” of reliability.

The trains must be capable of achieving a mean distance between failures of at least 300,000km while operating on the HS2 network and at least 160,000km while running on the conventional rail network (CRN). HS2 has specified that no single failure of the train’s traction, power supply, braking or train control systems should result in it being immobilised, and the trains must never suffer failures that prevent them reaching their destination.

The trains must be capable of normal operation when snow is up to 200mm above the rail head and flood water is up to 50mm below the rail.
As far as whole life and whole system costs are concerned, the design solution must maximise value for money, and recyclability must reach at least 90%.

The trains will operate services wholly on the HS2 network, and on both this and the CRN, while initial trial operations and some future operations may be conducted on the CRN only.

Particular features of the HS2 network include:

However, line speeds may be raised in the future through infrastructure works and re-signalling.

The CRN has a restrictive structure gauge typical of the British main line network. Lines are equipped with colour light signals protected by the British Automatic Warning System (AWS) and Train Protection and Warning System (TPWS), although ETCS may be installed during the life of the HS2 fleet. Station platforms have a nominal height of 915mm, but with significant variations, and the 25kV electrification has a variable height.

Different pantographs will be required for operation on HS2 and the CRN and these will automatically lowered and raised at defined locations at speeds of up to 360km/h.

Trains will have a moveable step at every passenger door, which will be deployed automatically when the door is released, and fully retracted when the train is in motion. Automatic selective door operation is required for stations with short platforms.

Implementation of a platform edge protection (PEP) system at HS2 stations is still under consideration. HS2 says the most likely solution is some form of platform screen door, aligned with the exterior door positions, but other concepts are being investigated.

The tender calls for a flexible interior for future reconfiguration. To achieve this, three layouts have been defined:

HS2 anticipates that either the one or two-space layouts will be selected prior to contract award. The trains will need to balance the needs of short-distance and long-distance passengers.

Two-plus-two seating will be the norm, with some two-plus-one seating for a premium class. There will be a mixture of airline and bay seating, with seat-back trays for airline seats and tables in bay areas. All seats will recline and will be fitted with moveable armrests, and every seat will have a power and a USB socket.

A café-shop will dispense hot and cold drinks and snacks. There will be a catering trolley stowage point to store and restock a trolley with hot and cold beverages and snacks. In addition, a catering kiosk with self-service machines will dispense bean-to-cup coffee, tea and hot chocolate, including drinks with foamed milk; chilled confectionary and snacks; chilled drinks in cans or bottles; and free-of-charge UV-sterilised, chilled potable water.

A minimum of three Edge-capable GSM-R/GPRS data-only radios (EDORs) are required, and the trains must be capable of migrating to the Future Rail Mobile Communications System (FRMCS). This will allow for a situation where current GSM-R/GPRS is used in some locations alongside FRMCS in others.

The trains must be able to operate with ETCS up to Level 3 and the on-board train integrity system for ETCS Level 3 must be SIL4. ETCS Level 0 is required for shunting and rescue, Level 1 for exiting the depot, Level 2 for operation on the HS2 network, and it is planned that this will be adopted across the CRN, which currently has three or four-aspect lineside signalling with AWS and TPWS, with which the train must comply.

The trains will feature a national C-DAS to provide advice to the driver when driving manually on the CRN. “Correct presentation of trains at junctions with the HS2 network is vital to achieve the high operational reliability,” HS2 says. “Furthermore, achievement of consistent, on-time running based on real-time railway conditions and the possibility of delivering energy efficiency are key to overall goals of the HS2 project.”

All non-safety critical, operational communication between the train and the wayside data system must be capable of being transmitted via both public mobile networks and Wi-Fi when the train is within range of a suitable Wi-Fi system, for example at a depot or station. Provision needs to be made for train-to-wayside communication to be compatible with future 5G networks. The trains will be fitted with a digital onboard repeater capable of repeating and boosting mobile network signals from outside the train to all areas inside. The public Wi-Fi network will communicate with public mobile networks and will be 4G compatible, with provision for 5G, and support LTE carrier aggregation, multiple in and out antennas for train-to-mobile network connectivity, and GNSS positioning. The Wi-Fi will enable all passengers to connect to the system simultaneously at the maximum available bandwidth .

The passenger information system will provide an automatic information programme (AIP) covering services, journey time updates, and real-time travel information. The trains will be fitted with a Bluetooth low-energy system or similar beacons at key locations inside the car body to provide location information to a passenger’s wayfinding system particularly for partially-sighted travellers. CCTV systems will monitor the train interior, the cab and the pantographs.

At least one coach will be fitted with accelerometers to detect poor track geometry and monitor ride comfort and track quality to provide early warning of infrastructure issues. Some trains will be fitted with infrastructure monitoring units including unattended track geometry and overhead line measuring systems, and a signalling and frequency monitoring system.

The HS2 train tender is prescriptive which should make it easier to evaluate. Nevertheless, with six bidders HS2 has given itself a year to find the winner.

WHILE the six pre-qualified bidders for the HS2 train contract are naturally playing their cards close to their chest, some information is available which gives an insight into what each bidder may submit.

Bombardier and Hitachi were originally shortlisted as separate bidders, but subsequently decided to join forces, “to double our resources and halve the risk,” as Mr Robert Davies, bid director with Bombardier, explained to IRJ. The two companies opened their HS2 bid centre in Birmingham on September 12, the team is led by Mr Matthew Cross who was brought in to become the independent HS2 bid director.

The two companies say they will build on their joint project to build the fleet of 350km/h Frecciarossa trains for Trenitalia and utilise their experience in the development of high-speed trains in Europe, China and Japan. Both companies have plants in Britain which they would use to build the trains should they win the contract. Davies says he expects the primary contractor to still be engaged in the maintenance of the initial fleet for much of the life of the trains, even though the maintenance contract is for 12 years. He also says Bombardier would be willing to collaborate with Hitachi again for the next batch of trains for Phase 2 of HS2.

The decision by Bombardier and Hitachi to team up resulted in HS2 shortlisting CAF to bid to maintain the same number of bidders. CAF says it intends to offer its Oaris high-speed train. “CAF plans to build the trains in its manufacturing facility currently being constructed in Newport, Wales,” says Mr Richard Garner, CAF’s UK director.

Alstom is building its new Avelia Liberty single-deck train for Amtrak and has supplied its AGV single-deck distributed traction train to Italian open-access operator Italo-NTV. Either train could form the basis for its bid.

Talgo has supplied 330km/h trains to Renfe, Spain, and 300km/h trains for the Haramain high-speed project in Saudi Arabia, which was expected to open last month. Talgo is currently building 30 Avril 330km/h trains for Renfe. Last year, Talgo said it will develop its Avril UK concept for operation within the restrictive British loading gauge. This means the British train would only have two-plus-two seating compared with three-plus-two for the Spanish version. Avril UK would retain Talgo’s articulation system, which avoids the use of conventional bogies. However, while the Spanish version has power cars the British variant would have distributed traction.