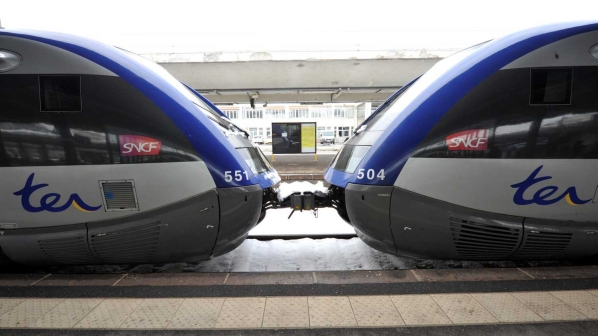 The French Court of Auditors has called for major reform of TER regional train services.

The report, published on October 23, examined the performance of TER services which carry about 900,000 passengers per day on 20,489km of the French rail network. It says despite the French regions investing €3.3bn in rolling stock and €2.1bn in the network and stations between 2012 and 2017, patronage of TER service fell during this period apart from a slight increase in 2017. By contrast, TER passenger traffic doubled between 1995 and 2012.

The Court says the fall in traffic can be partly attributed to competition from car pooling and inter-city bus services, a reduction in population in some areas and lower fuel prices. However, the Court says the decline is also the result of worsening service quality caused by strikes in 2014, 2016 and 2018, a high level of train cancellations, and deteriorating punctuality due to an increase in engineering works on the network.

“The network used by the TER services is indeed seriously degraded, in particular with regard to the busiest lines which, in 2017, represented 9137km of the lines used by TERs,” says the Court of Auditors. “This deterioration of the state of the rail network has led SNCF Network to multiply speed restrictions, or even to suspend the service for safety reasons.”

The report says there is great disparity in the number of passengers using different TER services. “The average is indeed pulled down by some low-traffic lines, with many trains occupied by fewer than 10 passengers,” the Court says. “The same goes for the stations: in 2016, there were 285 stations with an average of less than three passengers a day.”

TER operating costs, which amounted to €4.1bn in 2017, are rising. The report says responsibility for these high costs is shared between the regions and SNCF Mobility. “The former do not always try to rationalise the activity, by proposing poorly optimised transport plans or by maintaining a level of service at the station (ticket offices) or on board the trains (presence of controllers) whose effectiveness is debatable,” the Court says. “The second provides the service at a very high cost, in particular because of inefficient work organisation, low staff versatility and too-automatic pay increases.”

According to the report, the total cost of operating TER services in 2017, including investment, pensions and environmental costs, was €8.5bn, or an average of €0.61 per passenger-km. “This makes TER the most expensive mode of transport, with the exception of a taxi for one or two travellers,” the Court says.

The report points out that 88% of TER costs are covered by public subsidies, with passengers only paying 12%, equating to about €1bn a year. The Court says the regions have continually reduced the proportion which passenger pay.

The report says the regions are poorly prepared for tendering TER services under the Fourth Railway Package. “Most regions have still not been sufficiently aware of the means to be used to successfully open up to competition,” the Court observes. “To do this, the regions must very quickly strengthen their skills, in particular by making greater use of technical, legal and financial expertise.”

According to the Court of Auditors, only three regions - Grand Est, Hauts-de-France, and Provence-Alpes-Côte d'Azur - are ready to put certain lines out to competitive tender. Four regions - Auvergne-Rhône-Alpes, Normandy, New Aquitaine, and Pays de la Loire - planned to invite bids to operate some lines in 2019-2023 but have dropped their plans for the moment. Four regions - Occitanie, Bourgogne Franche-Comté, Brittany, and Center-Val de Loire - have not yet agreed the timing and methods for opening up TER services to competition.

The report also says SNCF Mobility has only recently become aware of the urgency for change. “It was not until 2016 that the TER general management drew up and implemented a strategic plan, CAP TER 2020, geared towards reducing costs and improving quality,” the Court says.

The Court of Auditors makes nine recommendations to improve the situation. These include:

Mr Franck Lacroix, who was appointed SNCF’s TER general manager at the end of 2016, refuted some of the Court of Auditors’ findings. “Since the launch of CAP TER 2020, we have regained clients on TER,” he says. “The trend is at +10% by 2020, of which 14% are casual travellers.” He also says punctuality of TER services is now 93%.

“Since 2017, the cost of production per traveller is down 3.4%,” Lacroix explains. “In the new contracts signed with 100% of the regions, we have committed to a cost reduction of -6% to -23% depending on the duration of the contracts.” Ticketless travel has been cut by 10% a year, generating an additional €10m in revenue.

Lacroix says the “administrative conventions of the past” with the regions have been transformed into performance contracts with strong commitments and economic incentives to improve performance. He also points out that SNCF is expanding services with 11% increases in Occitanie and Pays de la Loire, for example. He also points to strong traffic growth with increases of 22% in Bourgogne Franche-Comté, 24% in New Aquitaine, and 26% in Provence-Alpes-Côte-d'Azur.

The danger for SNCF is that if it does not improve its performance significantly, when tendering of TER services does start, it will find it difficult to compete with more-agile private operators when it bids for contracts. Many of the regions have been unhappy about the SNCF’s performance, but are clearly ill-prepared to launch tenders for TER concessions. Hopefully, the Court of Auditors report will be a wakeup call for both SNCF and the regions.