Germany’s Climate Cabinet agreed measures to fight climate change on September 20, which includes a major boost in rail investment to encourage a switch from road and air. David Briginshaw analyses what will this mean for Germany’s railway network. 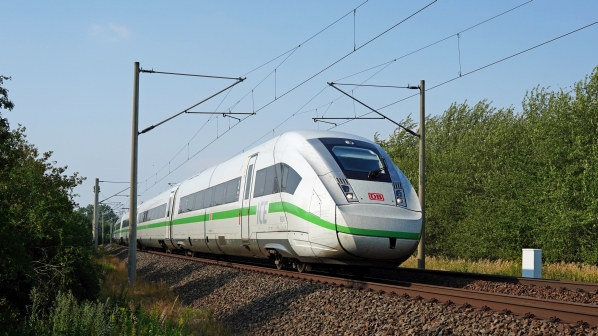 THE Climate Cabinet of Germany’s coalition government announced its climate protection plan on September 20 after 18 hours of overnight negotiations. The plan will inject €54bn into the fight against climate change by 2023 and includes additional funding for rail, trials of €365 annual public transport passes, and a federal law to increase aviation taxes.

The government’s announcement came as thousands of people took to the streets in cities across Germany as part of a global climate strike.

While environmental campaigners wanted the government to introduce a CO₂ tax of €180/tonne, the government agreed to introduce a tax of just €10/tonne in 2021, which will add 3 euro cents per litre to petrol and diesel prices. The tax will rise to €35/tonne by 2025, and to between 435 and €60/per tonne a year later. Critics say the initial tax rate is barely above the rate of inflation and will have little impact on CO₂ emissions.

While the plan includes initiatives to encourage solar power plants and off-shore wind turbines, land wind turbines will no longer be permitted within 1km of residential property.

“Climate protection, growth and employment are not opposites, but go hand-in-hand with climate-friendly railways.”

Nevertheless, the government has agreed a series of measures to encourage greater use of the rail network as it recognises the environmental benefits of switching passengers and freight to rail.

“According to our first estimates, the German government is strengthening the German railway sector with more than €20bn by 2030,” says DB’s CEO, Dr Richard Lutz. “This is great news for the entire sector and its more than 500,000 employees. And it shows that climate protection, growth and employment are not opposites, but go hand-in-hand with climate-friendly railways.  Without any exaggeration, we are talking about a turning point in the perception of the railway in Germany. This is the largest investment and growth programme in over 180 years of railway history.”

Between 2020 and 2030 DB will receive additional equity of €1bn per year amounting to an extra €11bn over the next decade for modernisation, electrification and expansion of the network. DB says that the capacity of the rail network will be increased by 30% over the next few years, which equates to an extra 350 million train-path kilometres, while 70% of the network will be electrified by 2025. To achieve this, the Federal Ministry of Transport and Digital Infrastructure has set up an electrification programme.

The announcement confirms the new Performance and Financing Agreement (LuFV III) for 2020-2030, which will follow on from LuFV II covering the 2015-2019 period. Under LuFV III, on average €8.6bn will be available each year compared with €5.6bn a year under the current agreement.

“First and foremost is the commitment of politicians to massively strengthen rail infrastructure.”

The government has also decided to double the duration of LuFV III to 10 years. “This significantly increases planning security for companies, suppliers and service providers, with the advantage, for example, that capacity can be built up in construction and planning companies and long-term agreements can be concluded with suppliers,” DB says.

“First and foremost is the commitment of politicians to massively strengthen rail infrastructure,” says Mr Ronald Pofalla, DB management board member for infrastructure. “This is particularly important because the rail network is the backbone of the turnaround in mobility. In other words, without massive investment in rail, the mobility turnaround will fail.”

“We will pass on the reduction to our customers and also waive a price increase.”

“I’m sure that more attractive prices will trigger more demand,” Lutz says. “We will pass on the reduction to our customers and also waive a price increase.”

DB says super-saver fares will be available starting at €17.90, which is €2 less than today. For holders of DB’s discount card (BahnCard), the fare will drop to €13.40. “This is the lowest regular entry price since the railway reform in 1994,” DB says.

DB’s first decision on September 20 was to announce an order for 30 high-speed trains. The 300km/h trains will be delivered by the end of 2022, providing 13,000 additional seats per day. Together with the 74 ICE 4 trains already on order, this will expand DB’s ICE fleet from 282 to 386 trains over the next three years.

This was followed on September 23 by a call for tender for a framework deal worth around €2bn for up to 90 EMUs with a top speed of at least 300km/h for entry into service from December 2022 onwards. The trains will be 200m long, and must be able to operate in multiple with DB’s existing class 407 ICE fleet. The fleet must be certified to operate in Germany, as well as the Netherlands, Belgium, France and other networks in Europe at up to 320km/h.

Under DB’s “Strong Rail” strategy, which was unveiled in June, DB aims to increase long-distance capacity by up to 100% and to double passenger numbers to 260 million a year. This will mean expanding the high-speed fleet to more than 600 trains eventually.

The objective is to connect Germany’s main cities with a train every 30 minutes by 2025, with small and medium-size cities having a connection to the ICE network at least every two hours. DB says this will give more than 80% of the population access to the long-distance network.

The Hamburg - Berlin route will be the first to have ICE trains running every half hour. The high-frequency timetable will be introduced in December 2021.

The federal government will also significantly increase funding for public transport through the Municipal Transport Financing Act (GVFG). Federal funds, already anchored in the coalition agreement to e1bn per annum from 2021, will be increased to €2bn per year from 2025. “Much of this appropriation will benefit the development of urban transport systems and related rail infrastructure in metropolitan areas,” DB explains.

The German government has also agreed to strengthen rail freight transport to make it more attractive. This applies both to intermodal freight, which DB says is becoming increasingly important in a more interconnected and integrated transport world, and to single wagon-load traffic, which DB still believes has a future as it says it plays an important role in serving German industry.

Not everyone is happy with the German government’s decision to pump extra money solely into DB.

The Mofair lobby group, which represents private rail passenger operators, questions the decision to only invest in DB, when around 40% of local and regional rail services are provided by non-DB companies, and 50% of rail freight is transported by private operators. Mofair fears the deal will distort competition.

“How should a new competitor such as FlixMobility, which has to finance its own trains, compete against DB Long-Distance if it gets its new ICE trains from the federal government?” Mofair’s president, Mr Christian Schreyer, asks. “In order to strengthen rail infrastructure, there is no need for a capital increase. The federal government can directly finance necessary infrastructure measures, as it does for example through the performance and financing agreement. The governing coalition must finally understand that the rail system is more than DB.”

Mofair says there are many ways the federal government could invest in rail without distorting competition. For example, Mofair says the government could commit to fully funding ETCS including onboard equipment, give more money to local authorities to expand services, and fund new long-distance trains, which would be available for other operators to use.

While the increased spending on rail is welcome, and will give a boost to DB’s sustainability programme, there will need to be further increases in funding in the future, and not only directed at DB, if rail is to achieve a sustained and substantial increase in traffic at the expense of road and air in order to play a greater role in the battle against climate change.

LAST year, 57% of DB’s traction energy was from renewable resources and all long-distance electric trains were powered by 100% green energy. DB plans to increase the proportion of total traction generated from renewable resources to 80% by 2030 and 100% by 2038. “Strong Rail means reducing CO₂ emissions by 10 million tonnes per year,” DB says. “This corresponds to the annual carbon footprint of one million people.”

In September DB signed a five-year contract for the supply of green energy from the Nordsee Ost offshore wind farm. The contract was signed by DB subsidiary DB Energie, RWE subsidiary Innogy, and RWE Supply & Trading. The contract will run from 2024. The supply volume is 25MW, which is 8% of the total production of the wind farm, which consists of 48 turbines with a total output of 295MW.

Innogy hydro power plants have been supplying DB with around 900 million kWh of green power annually since 2011. DB’s annual energy requirement is around 10 terawatt hours, equivalent to the energy consumption of a city the size of Hamburg.

DB says this contract is the first offshore wind corporate power purchase agreement (PPA) in Germany. The power is produced at the offshore wind farm for a fixed price and is used directly by DB. RWE Supply & Trading acts as the contract and retail partner.

“Over the next few years, we will consistently replace expiring contracts based on fossil-fuel generation with renewable energy,” says Mr Torsten Schein, CEO of DB Energie. Another Europe-wide invitation to tender for the long-term purchase of green electricity was planned before the end of September.