Grube continues the fight against seperation

While German Rail (DB) is performing well financially, it still faces some tough challenges as it deals with threats to its existence as a fully-integrated railway and copes with the aftermath of past misjudgements. DB's CEO Dr Rüdiger Grube (pictured) reveals in an exclusive interview with David Briginshaw how the railway is addressing these issues. 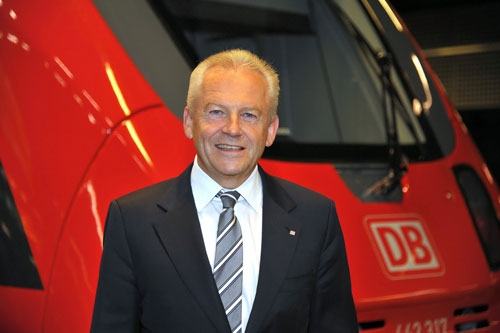 THE amiable CEO of German Rail (DB), Dr Rüdiger Grube, must at times wonder whether Europe's largest railway is jinxed. Just as one problem is solved, another seems to emerge. Over the last few years, DB has faced a very public scandal in which it was found to have spied extensively on its own staff, the high-profile Berlin

S-Bahn has suffered major disruption since 2009 due to poor train maintenance and inspection and as a result part of the 331km network is being put out to competitive tendering, and DB has faced major opposition to its controversial Stuttgart 21 project.

On top of this, DB's cherished status as one of the few remaining fully-integrated railways in Europe, albeit with an infrastructure subsidiary - DB Networks - is under threat. Grube, like his predecessor Mr Hartmut Mehdorn, is a strong believer in integrated railways, but the European Commission (EC) seems determined to force through the separation of infrastructure from train operations as part of the Fourth Railway Package.

Grube, however does not see vertical separation as inevitable. "We will see whether the EC comes up with a proposal on the issue and how it is seen by the European Parliament and the Council," he says. "In my opinion, it is crucial that the principle of model neutrality is preserved. I'm confident that the track record of our integrated system regarding transport performance, benefits for the customer, public expenditure, and the development of competition will prevent politicians from eliminating this option for the future.

"Specifically, the situation in Germany and Britain confirms that competition can develop very successfully irrespective of the rail organisation model, provided market access is subject to effective rail regulation. Given the current discussions about reintegrating infrastructure and transport operations in Europe, especially in France and Britain, the EC should not determine a model."

Grube says that about 98% of the world's rail traffic is carried on vertically-integrated railways, including those deemed to be among the best performers such as Swiss railways, US Class I freight railways and Japanese passenger railways. "These are often referred to as benchmarks in their respective businesses," Grube told IRJ. "In my opinion, it would be a really bad idea to insist that complete separation of rail operations and infrastructure is the only permissible model in Europe."

I asked Grube what he regards as the main dangers for DB of separating the infrastructure from train operations, and whether he believes there are any benefits from separation. "It is important to keep in mind that current European railway legislation already provides far-reaching unbundling requirements. When it comes to full ownership separation, I'm convinced that such an obligation would cause considerable harm, not only for DB, but for the railway sector in Germany and Europe as a whole."

Grube explains that DB's structure has proven to be very successful and has enabled public funding of the railway to be reduced by 35% between 1994 and 2010. During the same period, railfreight in Germany increased by 60% and passenger traffic by 30%, while by 2010 the market share of open-access competitors had risen to around 21%. By implication, DB's ownership of the infrastructure is not impeding competition, although some of DB's competitors would probably disagree. In June EC competition authorities launched an investigation into allegations of anti-competitive pricing of traction current by DB subsidiary DB Energy.

Nonetheless Grube argues an integrated structure provides incentives for infrastructure investment. "This is why DB invests about €1bn per year of its own money in railway infrastructure," he says.

This month Berlin will play host to the large number of railway managers and engineers from around the world visiting InnoTrans. So will they be able to depend on the S-Bahn to get around the city? "Every day the Berlin S-Bahn carries up to 1.3 million passengers, making it an important, if not the most important means of transport in Berlin," Grube replies. "We, and above all our 3000-plus S-Bahn employees, are working hard to offer residents and visitors a reliable service. This is something we haven't always succeeded in doing in the past, but overall, we are moving in the right direction. You will experience a reliable means of transport when you travel with the S-Bahn Berlin during InnoTrans."

As the S-Bahn has been suffering serious reliability problems since 2009, I asked Grube why it has taken so long to get the system fully operational again, and what the final bill will be. "When it comes to Berlin's S-Bahn system, we need to differentiate between two things," he explained. "On the one hand, we have S-Bahn GmbH which operates the trains. Here we turned everything on its head - we reopened workshops, redesigned servicing and maintenance processes, and upgraded and retrofitted the vehicle fleet.

We installed 4000 new axles alone during a major wheelset replacement programme. In addition, we have completed the process of replacing over 2500 traction motors, upgrading the brake sanding systems and installing automatic function and fill level monitoring systems.

"We have spent an amount in the high three-digit millions on upgrading and retrofitting the train fleet as well as on compensation to customers as a gesture of goodwill. Now things are running pretty smoothly - although we still haven't achieved our goals as far as punctuality and mileage are concerned.

"On the other hand, the infrastructure still has some areas in need of improvement. Some of the tracks, switches, and signalboxes have been in operation for over 80 years, and have been the cause of occasional hiccups. But we are investing enormous amounts of money in making Berlin's S-Bahn system more reliable, and we plan to invest another €720m by 2016."

Another thorny issue is the Stuttgart 21 project which resulted in at-times-violent protests over the last few years. Grube is optimistic though that the problems have now been resolved and he is adamant that DB has learned from the experience. "In Stuttgart things have become much calmer," he says. "This is primarily due to the fact that when a referendum was held on Stuttgart 21, a great majority in Stuttgart and Baden-Württemberg spoke out in support of the project, and now it is being carried out. Preparations are currently underway to begin construction of the low-level station. About 50% of all construction work has now been awarded, including 90% of work building the tunnels. In the future we will get citizens more involved, and involved earlier in planning infrastructure projects.

"We need to develop formats which continuously provide people with information and get them involved during the long periods of time from planning to implementation of such projects. This includes information about what is being built, as well as an examination of the areas of potential and risks of such projects - whether this relates to business/transport, urban development or the environment."

DB's problems in Berlin and Stuttgart and the 2009 spying scandal suggest that DB has some way to go to improve its image both externally and internally. Grube though insists that he wants DB to be both a popular railway and a top employer, and has several initiatives to achieve this.

"As a service provider, satisfied customers are the most important thing to us, and we can only have that when we also have satisfied employees," he says. "In the management board we decided that in the future, the performance-based portion of our salaries will be 50% dependent on employee and customer satisfaction. Our employees know this and see that those of us on the management board are dead serious about changing our corporate culture.

"Furthermore, we want to increasingly tailor our human resources policy to the stages of our employees' lives and careers. Specifically this means improving our employees' work-life balance and trying to offer personalised, tailored solutions when drawing up shift and work schedules.

"When it comes to customer satisfaction, every day we survey 1000 customers in different business units. And the responses have rarely been as positive as they are now. A large part of this is definitively due to the fact that the trains are more punctual. And we are also currently working on radically modernising our entire passenger fleet. In addition to redesigning our ICE 2 trains, we have also begun modernising the IC fleet."

Inevitably achieving these goals are major challenges for DB over the next five years, along with the continuing economic uncertainty in Europe together with social and ecologic issues. Grube says DB's 2020 sustainable strategy launched in March aims to address them. "With this strategy we will harmonise economic, social and environmental aspects to assure sustainable business success and social acceptance," Grube explains. "Overall the key takeaway is this: we are moving in the right direction and we are well prepared to meet upcoming challenges. Managers and employees work hard each and every day to ensure we keep moving forward. And even though we may experience setbacks from time to time, you can be sure that DB is 100% "made in Germany" and remains a symbol of quality."