Intermodal wagons: how low can you go?

The semi-trailer market offers a huge growth potential for European intermodal operators providing height restrictions on key transalpine corridors can be overcome. Anitra Green reports on a technical innovation that could provide an answer. 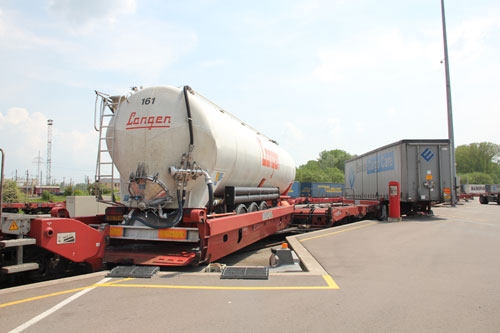 WHEN the standard intermodal container was developed in the 1950s, nobody could have foreseen the various directions the market for intermodal traffic would take. Containers now come in wide variety of sizes and intermodal freight also encompasses tank containers, swap-bodies, and semi-trailers, all of which are becoming bigger and more numerous.

Unfortunately, European intermodal operators such as Kombiverkehr and Hupac can only handle a small proportion of semi-trailers, as only about 10% of them have a strengthened chassis which allows them to be lifted vertically. Even when they can be loaded horizontally, for example using the "rolling motorway" truck-on-train services on transalpine routes, there is a loading gauge problem. Mega semi-trailers increasingly favoured by road hauliers and logistics companies have a corner height of 4m, which limits the number of routes on which they can be carried, especially the important transalpine corridors.

At the moment the only transalpine routes which have a 4m corner-height clearance are the Lötschberg/Simplon line, which is already at capacity, the Brenner, and, since June this year, the Fréjus tunnel. The existing Gotthard line is limited to a corner height of 3.8m. The Gotthard base tunnel, which opens in 2016, will allow a corner height of 4m which will produce an enormous increase in capacity, but unless the sections north and south of the new tunnel are upgraded to this standard, its use could well be restricted. Hupac has lobbied for some time for a continuous 4m corner height corridor, but this could cost around SFr 1bn ($US 987m) and take years to realise.

The alternative is to make the most effective use of the existing infrastructure, and this is where the French Modalohr system comes in. It was developed for the 170km transalpine route between Aiton (France) and Orbassano (Italy) via the Fréjus tunnel. It is also used on a successful intermodal service run by the Geodis logistics subsidiary of French National Railways (SNCF) on the 1000km route between Bettembourg, Luxembourg, and Le Boulou on the French-Spanish border.

Semi-trailers are loaded horizontally on to pocket wagons that have a rotating section which can swivel at an angle to the train, all at once if required. Unlike other systems, the semi-trailers need no modification - a huge advantage if road hauliers are to be persuaded to use rail. The terminals have to be equipped with special ground installations, which may look expensive but do not necessarily require any more investment than a conventional intermodal terminal with gantry cranes.

Modalohr says it has found a way of saving those last few centimetres of height which will enable its wagons to carry 4m-high semi-trailers on routes that normally have a height restriction. A new pocket wagon, the Modalohr UIC, is being developed specifically for the Gotthard route which is basically identical to the existing model, but with a few essential differences. A simple mechanical modification allows the deck height to be adjusted according to the weight of the trailer, at a constant nominal height of 225mm above the track. This will enable the wagon to conform to three loading gauges: EBV02 for the Gotthard, AFM423 in France and P390 in Italy. In addition, the sides of the wagons will be lower, enabling units to be loaded with reach-stackers.

Mr Sébastian Lange, development manager at Modalohr, who is the brain behind this development, says a prototype will be ready by the end of the year. Lange says the new design has already received the unofficial blessing of the Swiss authorities, who say it complies with all their requirements, including software applications. Certification is expected in June 2013, and the first unit off the production line is scheduled for October next year. Lange says a great deal of interest has already been shown and he expects orders for 500 units.

Geodis is planning to use the new wagons to launch an intermodal service across the Alps in 2015 called Trans-Helvetica. It will run from the Ruhr area and Lahr in Germany to a terminal to be set up near Chiasso on the Swiss-Italian border. Six return trips a day are planned, with space for up to 40 semi-trailers per train. Mr Arnaud Denizet, project manager at Geodis, says the objective is to capture 18-21% of the transalpine market for semi-trailers.

Only time will tell what effect the new wagon will have, not only on the transalpine market but on the European intermodal scene in general. Assuming the introduction of the wagon is a success, one could speculate that infrastructure managers will use it as an excuse not to invest precious funds in upgrading lines to accommodate a corner height of 4m. Whatever happens, the intermodal market is in for some interesting times - but at least the fears occasionally expressed that the Gotthard base tunnel will turn out to be an expensive white elephant because of lack of adequate access should prove groundless.