Disruption to global shipping and container supply brought about by the coronavirus pandemic has created a remarkable turnaround in inter-state rail freight volumes in Australia, especially on the east-west transcontinental corridor, reports Mark Carter. 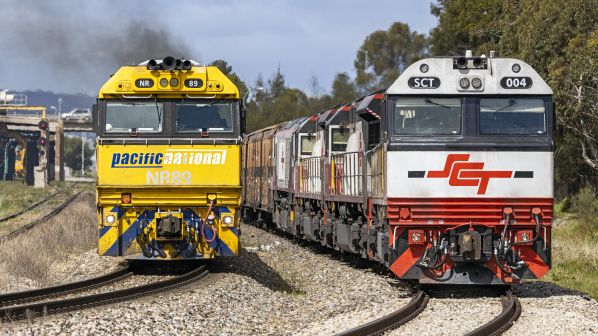 Pacific National and SCT Logistics have both increased services in responce to an increase in demand. Photo: John Kirk

JUST over a year ago inter-state rail freight’s rapidly falling market share in Australia was making national headlines, a major factor being the use of single and continuous voyage permits that allow foreign container ships to carry coastal domestic cargo in between their international voyages to and from Australia.

But changes in shipping patterns brought on by the pandemic have seen a significant, though possibly temporary, reduction in the number of ships seeking these permits with containers carried dropping by around 40%.
Ships that would call in Melbourne or Sydney and then carry on to Perth with a part load of domestic containers, now turn around and head straight back to the United States or China carrying more lucrative cargoes.

In the last year, a surge in demand for rail capacity to compensate has resulted in Australia’s two main inter-state rail freight operators, Pacific National and SCT Logistics, having to increase services to keep the supply chain moving.
Pacific National alone has had to introduce three additional weekly return intermodal services between Sydney, Melbourne and Perth to keep pace with demand.

The company’s chief commercial officer, Mr Andrew Thomson, points out that the increase is also due in part to the shift from road to rail driven by pandemic related challenges brought on by strict state border crossing restrictions for inter-state trucking.

“Overall average monthly volumes across our intermodal network have risen by almost 15%, compared with pre-pandemic levels, that has seen us operating at effectively peak capacity for the last 12 months,” Thomson says.

“Pacific National will have increased its capacity for container movements on rail by more than a third, compared with pre-pandemic levels, in less than three years and we are committed to increases of 10% by March 2022 and a further 5% by September 2022.

“Overall, additional capacity will be boosted by another 25% over the next four years, representing a significant commitment of capital and resources to the growth of freight on rail.”

Pacific National recently announced that it will take delivery of 50 new C44 Evolution locomotives from local supplier UGL in a deal worth $A 297m ($US 220m) over seven years. The first locomotives will be delivered in late 2023 and will be initially deployed on intermodal trains to support the planned capacity increases.

“Our investment programme also includes 12 new locomotives, along with new rolling stock, we have also invested recently in bringing our fleet maintenance and engineering facilities in-house.”

The issue of single and continuous coastal shipping permits was raised by SCT Logistics in 2012 when federal government regulations surrounding these voyages were significantly relaxed. Figures provided by SCT show that in 2019 a total of 69,291 20ft equivalent containers (TEU) were moved around the Australian coastline under the permit system, a 465% increase on the 2012 figure.

The 2019 total is the equivalent of approximately five fully-loaded 1.8km-long double-stack freight trains per week on the east-west corridor.

With the disruption to global logistics chains, comparison of figures for Q1-Q3 in the 2020 and 2021 calendar years have shown a significant drop of 41% in the number of TEUs moved under the permit system.

SCT Logistics managing director, Mr Geoff Smith, says whilst his company has enjoyed greater volumes through the pandemic, operating costs and business risk have increased following the capitulation of the shipping lines.

“I feel we’ve used this time well to lay the foundations for our future,” Smith says. “Clearly, the rail network is under capacity pressure as foreign shipping companies continue to drop domestic volumes in favour of more lucrative international markets. To the extent that rail’s current volume surge is artificial, customers have indicated they may well return to foreign shipping when capacity is available again. We are focussing our investment on existing customers and improved service levels.”

Generating rail capacity is capital intensive with the larger investment often in terminal capacity. Out of a total committed investment of $A 200m, SCT will be investing $A 80m to expand capacity at most of its rail terminals.

“Our investment programme also includes 12 new locomotives, along with new rolling stock,” Smith says. “We have also invested recently in bringing our fleet maintenance and engineering facilities in-house which has brought about improvements in locomotive performance and reliability.”

The question remains as to whether the Australian rail industry has the ability to capitalise on these recent gains and retain them once shipping and logistics patterns return to pre-pandemic norms?

Conflicting transport policies of both the federal and state governments also continue to be major obstacles for the industry to overcome.

Rail vs road and sea

In the last two years approval has been given for the roll-out of 105-tonne, 36.5m-long B-Quad road trains on selected routes, while elsewhere 42m, B-triple road trains, with a gross combination mass of 82.5 tonnes, have been approved for the run to Western Australia.

The New South Wales government only recently approved the use of 36.5m long road trains to operate over 1000km of the Newell Highway, which parallels the planned Inland Rail route for much of its length.

The coastal shipping policy that continues to be promoted by the federal government is also totally at odds with its own $A 14.3bn investment in the Melbourne - Brisbane Inland Rail project.

The Rail Tram and Bus Union (RTBU) says that the federal Department for Infrastructure, Transport and Regional Development has prepared a discussion paper that recommends even further relaxation of the rules surrounding the single and continuous voyage permit system.

“If inter-state containerised freight services along the east-west corridor and Inland Rail are undermined by unfair competition from foreign shippers, then these rail lines will wind up as stranded assets for the federal government, and Australia’s domestic transport security will be outside our control,” says RTBU national secretary, Mr Mark Diamond.

This viewpoint is shared by Mr Peter Smith, owner and founder of SCT Logistics, who is very concerned about the Australian government’s transport policy. “We’ve been advising rail authorities and governments for years of the threat posed by the coastal shipping policy,” Smith says. “No other country in the world allows international ships to decimate their domestic landside logistics companies. The advantage of free access on sea and avoidance of paying taxes in Australia is a policy that if it remains unchecked, could eventually push freight trains to the west out of existence.”