Following the publication of a preferred alignment, Dublin is moving closer to beginning construction of its first metro line. David Burroughs looks at the progress made and how public opinion has helped the plan evolve. 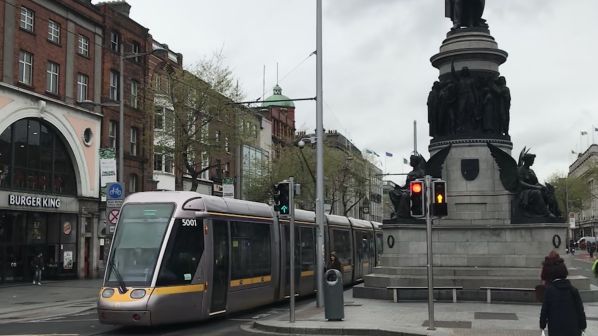 The new metro line will provide a much-needed boost in rail capacity in Dublin.

URBANISATION is set to increase across the world in the coming decades, with the percentage of people living in cities expected to grow from 50% today to 60% by 2030 as the overall global population increases by around 6% from around 8 billion today to 8.5 billion.

The urbanisation of Dublin is set to increase even faster, with the population forecast to expand by around 15% from 1.3 million today to 1.5 million by 2040. Dublin is experiencing strong levels of employment, or at least it was before the Covid-19 pandemic hit, and this is likely to continue with large companies such as technology giants Google and Facebook locating their offices in the Docklands area of the city.

Ireland ranks within the top 20 countries in the world in metrics such as quality of life and environmental performance, but Dublin sits outside the top 30 cities in the world for liveability. Environmentally sustainable public transport has been identified as a necessity to amend this.

The Irish capital’s already busy road network - more than 70% of all trips are made by road - is struggling to meet demand. The city has now reached critical levels of road congestion, especially on key routes such as the M50, where high value economic trips such as transporting food and other freight are at the mercy of heavy commuter traffic.

In order to address the situation, the National Transport Authority (NTA) developed the Transport Strategy for the Greater Dublin Area 2016-2035 - a framework for transport development across the wider Dublin area for the next 20 years. The plan proposes three major infrastructure projects to provide attractive, affordable and reliable public transport: MetroLink, a new automated metro line; BusConnects, an enhanced bus network; and the expansion of Dart commuter rail services.

The proposal merged two existing projects - Metro North and Metro South - which had been proposed for more than two decades. The emerging preferred route has since undergone public consultation, which attracted more than 7000 responses both in support of the proposed alignment and with concerns about the impact of some aspects.

TII published the updated preferred route in March 2019 with significant changes to the overall scope of the project.

The line was initially designed to run 26km from Estuary, north of Swords, via the airport and the city centre, terminating at Sandyford in the south of the city. This involved connecting the metro line to the Luas light rail Green Line at Charlemont and upgrading the southern Charlemont - Sandyford section to metro standards (see panel below).

In the updated preferred route, the Charlemont - Sandyford section has been dropped following concern from the community and politicians that the upgrade would result in a four-year closure of the light rail line, limiting transport options. The new 19.1km metro line will now have 16 stations, nine less than previously proposed.

The Park and Ride facility at Estuary will have 3000 spaces, and the line will feature major interchanges with rail services at Glasnevin and Tara stations.

Metro services will operate with 40 60m+ long trains running at Grade of Automation 4 (GoA4), providing capacity for up to 20,000 passengers an hour and up to 50 million riders annually. The line will be capable of operating 24 hours a day, with automation allowing dynamic management of service levels.

Around 67% of responses from the public consultation were related to the use of Griffith Park, the home of the Na Fianna Gaelic Athletic Association (GAA) club, to launch tunnel boring machines (TBM). TII announced in March 2019 that it would relocate Griffith Park station after it rethought the tunnel design.

TII initially proposed twin bore tunnels from north of Dublin Airport to Glasnevin where TBMs would be extracted and a second pair of TBMs launched to build the southbound tunnels. However, this would require an extensive construction site on the playing grounds and the loss of community sports amenities for up to seven years as well as a significant rise in lorries carrying excavated material from the site.

Instead, TII will proceed with a single bore tunnel, which will vastly reduce the scale of works and the impact on the city. A TBM will enter the ground south of Dublin Airport and bore a short 2.4km tunnel northwards under the airport, before being extracted and relaunched at Northwood to tunnel the full 10.1km to Charlemont. The remaining section will comprise 1.8km at grade or elevated and 5km cut and cover or retained sections.

The new launch site at Northwood will take much of the lorry activity out of the city, while the southern launch site for the Dublin Airport section is nearer the M50. This also removes the need to launch TBMs at Griffith Park and allows for the construction of a smaller station under the grounds of the Home Farm football club, which neighbours the GAA fields.

The tunnel will have an external diameter of 9.2m, with an average depth of 17m. TII is considering a number of TBM tunnelling methods for the project, including EPB Shield, Slurry Shield and Multi-Mode.
Other changes include a decision to relocate the sub-surface O’Connell Street station to a nearby site, which is due to be developed as a shopping centre, in an effort to reduce the impact on bus, Luas and car traffic.

When the emerging preferred route was first published, concerns were raised about the location of Dublin Airport station, with feedback that it was located too far from the terminals. TII says this is still under consideration, and it is in contact with stakeholders along the route, including at Dublin Airport, with the project team set to consider this feedback.

While the Irish government set aside €3bn for the project in its 10-year Capital Plan announced in February 2018, TII says a robust cost estimate will not be available until the design has progressed to a stage that will enable realistic and reliable figures to be calculated.

In March, TII appointed SNC-Lavalin Rail & Transit as operations advisor to lead the development of an operational strategy for the project. SNC-Lavalin will also review and critique the design of rolling stock and provide consultancy services and develop a business case for deployment of the GoA 4 train control system.

TII is currently developing a procurement strategy, which will take on board feedback from a recent market consultation. A public-private procurement (PPP) model is being considered for some of the MetroLink package, but a decision on whether this will be the final procurement model has not been made.

TII’s procurement guidelines call for interface and systems integration risk to be minimised, with this placed with “those parties best able to manage risk.” The strategy will also aim to incentivise collaborative behaviour and effective and efficient project delivery, while maximising cost certainty on the basis of mature designs with minimal whole life cycle cost.

The project will likely be offered in large packages to avoid a high number of complex contract interfaces and dependencies. For example, the tunnels, stations and fit-out will be combined into a single package while civil engineering and systems will be separate packages.

Provided the effects of coronavirus do not impact procurement and construction of the line, within a decade Dublin will have the greater transport capacity required to support its ever growing population.

THE omission of the Charlemont - Sandyford light rail upgrade to metro rail is one of the biggest divergences from the emerging preferred route for the metro.

The need to upgrade the line to service expected future demand was first identified in the Greater Dublin Area Transport Strategy 2016-2035.
Funding for the Green Line Capacity Enhancement (GLCE) project was approved by the government in November 2017. The project was designed to optimise the public transport network along Dublin’s southeast corridor and cater for the future demand for services, ensuring optimal use of existing infrastructure in advance of other major public transport investments.

This is being achieved by lengthening existing 43m-long LRVs to 55m, along with the purchase of eight new LRVs to allow a northbound peak hour frequency of 24 vehicles per hour.

During the development of the GLCE, it was acknowledged that further capacity enhancement of the Green Line would be required by 2030. With MetroLink and BusConnects due to influence the pattern and level of passenger demand on the Luas Green Line, it was decided that the timing, nature and scale of any future upgrade should not be considered until further detail of the design and implementation of these schemes was known.

Modelling has since indicated that upgrades to Green Line infrastructure and additional vehicles to provide a 30 LRVs-per-hour service in the morning peak could accommodate passenger demand on the corridor for up to 20 years following the opening of the metro line between Swords and Charlemont.

This means the upgrade to metro standards, or some other less-intrusive form of upgrade, is still planned but not now likely to take place for decades.