IRJ’s editorial team profiles the rail projects to watch in Australia and New Zealand over the next 12 months. 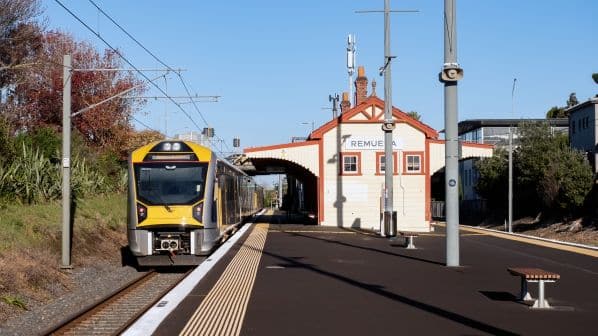 Preparations for the opening of the City Rail Link (CRL) in 2024 are underway by KiwiRail.

KiwiRail will be undertaking a major upgrade of the network in Auckland in preparation for the opening of the City Rail Link (CRL), now due for completion in 2024. With funding from Waka Kotahi, New Zealand’s national land transport agency, the track renewals programme will include removing the ballast and existing formation, building a new formation to provide a firm and resilient base for the new track and improving drainage. To complete the majority of work before CRL opens, KiwiRail and Auckland Transport will implement a programme of line closures. This will begin with the Onehunga and Southern lines which will close from January to March 2023.

The project in northwest Victoria includes re-sleepering, new ballast and track realignment on the Ouyen - Murrayville line, track upgrades from Ararat to Maryborough, and new or upgraded sidings at Donald and Merbein. It also includes upgrading signalling at Ararat and Maryborough junctions, Ouyen yard, and new and extended passing loops and new turnouts at Dunolly junction. The project also involves converting the track from broad to standard gauge and increasing the axleload from 19 tonnes to 21 tonnes, except for Ouyen - Murrayville which will remain at 19 tonnes. The project will improve the rail links between the Murray Basin and Victoria’s major ports at Portland, Geelong and Melbourne.

The project includes track, signalling and train stabling upgrades to improve ride quality, reliability and resilience for passenger and freight services and to prepare for the introduction of new VLocity DMUs. Stage 1 was completed in 2018. Stage 2, due for completion in late 2022, includes platform extensions at Mooroopna, Murchison East and Nagambie stations, a passing loop extension near Murchison East, 59 level crossing upgrades and stabling for the new VLocity fleet. Stage 3, due for completion in late 2023, includes signalling and track upgrades between Seymour and Shepparton for 130km/h operation, extended VLocity stabling, and extension of the Murchison East passing loop to increase line capacity.

The Sydney Metro - Western Sydney Airport line will run from St Mary’s suburban station south via the new airport, where there will be two stations, to Aerotropolis. Construction starts this month following the award last month of the third and final contract for the PPP project to the Parklife Metro consortium comprising Plenary, Webuild, RATP Development and Siemens to supply 12 trains, build six stations, install core rail systems and construct the stabling and maintenance facility at Orchard Hills.

For detailed data on projects in Australia, New Zealand and around the world, subscribe to IRJ Pro.