IRJ’s editorial team profiles the rail projects to watch in Europe over the next 12 months. 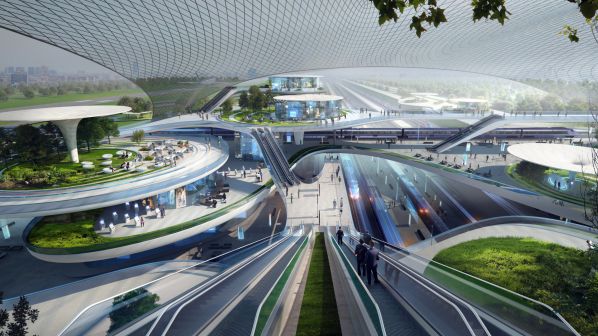 An artists impression of the new airport between Warsaw and Łódź.

Solidarity Transport Hub (CPK), the company taking forward the infrastructure programme centred on a new airport between Warsaw and Łódź, has signed three design contracts for the first route of the 2000km network of mostly high-speed lines being built as part of the project. The first line runs for 140km from Warsaw to Łódź via the new airport and will be Poland’s first high-speed line. The first design contract for the route from Warsaw to the transport hub at the new airport has been awarded to the Biuro Projektów Metroprojekt consortium and Sud Architekt Polska. Design of the remaining section to Łódź has been awarded to a consortium of Egis Poland, Egis Rail and Jaf-Geotechnika. Preparatory work on the Warsaw - Łódź high-speed line is to start at the end of 2023, followed by main works in 2024.

Construction of the Rail Baltica project to build a standard-gauge railway from Tallinn in Estonia via Riga and Riga Airport in Latvia to Kaunas and Vilnius in Lithuania and the Polish border officially started in November 2019. The new line will dramatically improve rail connections between the three Baltic states and the rest of the European Union for both passengers and freight when it opens in 2026. Rail Baltica will become part of the EU Trans-European Transport (TEN-T) network.

Announcing the start of dynamic testing at the Gayrettepe terminus on November 8, minister of transport & infrastructure, Mr Adil Karaismailoğlu, said the first phase of the Gayrettepe - Istanbul Airport - Halkalı metro line M11 was expected to open in the first quarter of 2023. The 37·5km first phase will connect Gayrettepe on Line M2 and Kağıthane on M7 with Hardal, Kemerburgaz, Göktürk, İhsaniye and the airport’s terminals 1, 2 and 3 (cargo). The second section of the line will be 31.5km long with seven stations, making a total of 69km with 16 stations. Construction is budgeted at €999.8m.

For detailed data on projects in Europe and around the world, subscribe to IRJ Pro.