This month London sees an unprecedented test of its transport infrastructure in the form of the Olympic Games. Keith Barrow examines how the city has prepared for the event. 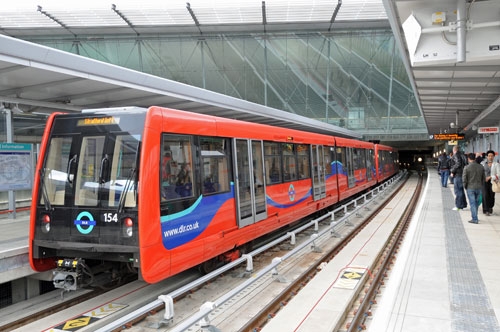 FOR the four million passengers who use London's Underground network each weekday, station announcements about safety, service levels and weekend engineering works are part of the soundtrack of travel in the capital. But there's something a little different about this one. "Hi folks!" the voice booms. "This is the mayor here. This is the greatest moment in the life of London for 50 years. We're welcoming more than a million people a day to our city and there is going to be huge pressure on the transport network. Don't get caught out. Get online and plan your journey at GetAheadoftheGames.com"

This is one of several messages recorded by mayor Mr Boris Johnson urging regular rail users to change their travel habits during the Olympic and Paralympic Games. It's a reminder, if one were needed, of the massive logistical challenge that London has taken on - meeting the travel needs of spectators and the so-called 'Olympic family' while ensuring the disruption to normal traffic is kept to an absolute minimum. London Underground chief operating officer Mr Howard Collins describes the Olympics as "the biggest transport challenge for our organisation in 149 years."

London has pledged this will be a 'public transport games', and the Olympic Delivery Authority (ODA) has set the ambitious target of ensuring all 11 million ticketed spectators, together with 300,000 athletes, officials, venue staff and media, travel to the venues by public transport or by walking or cycling. This puts rail at the heart of the Olympic transport plan. The Olympic Park at Stratford is well served, with no less than 10 lines and up to 240 trains per hour providing direct services to 309 stations on the metro, suburban, and mainline networks. But Stratford only accounts for around a third of spectator traffic, and is one of 15 Olympic venues across the city. Many of these are situated in the so-called River Zone, encompassing Greenwich, ExCeL, and Woolwich, with a further cluster of venues further west in the City Zone.

In the run-up to the games, the ODA and its rail industry partners focused on four issues: building sufficient capacity into the system to cope with the crowds; optimising operations to ensure maximum availability of infrastructure and rolling stock; staff preparedness; and provision of passenger information.

Although the rail network was largely complete or under construction at the time London's bid was accepted in 2005, a number of significant investments have been made to accommodate the event.

Docklands Light Railway (DLR) will play a key role in the Games, carrying an extra three million passengers and serving the River Zone venues as well as the Olympic Park. A 2.6km extension from King George V to Woolwich Arsenal was completed in January 2009, which provides an important north-south link across the river Thames for spectators, while the line north from Canning Town to Stratford International, which uses a former heavy-rail alignment, opened in September 2011.

Bombardier has supplied 55 new B07 trains, allowing three-unit operation on most of the driverless network, a project Transport for London (TfL) has brought forward with the aid of funding from the ODA. Platform lengthening on the Beckton and Woolwich lines was also funded from the Olympic budget. DLR will carry 500,000 passengers on the busiest day of the Games.

Stratford Regional station is a key hub on the edge of the Olympic site where the main lines from London Liverpool Street to eastern England intersect with the Overground, DLR, and London Underground's Central and Jubilee lines. The station has been expanded to 17 platforms and refurbished in a £120.5m project funded by the ODA.

On the Underground, operating hours will be extended by about an hour, meaning the last trains from some venues will depart as late as 01.30. Services will also start an hour earlier on Sundays, and London Underground will run additional trains to cope with spikes in demand when events finish in the evening. London Underground has pledged to operate "every train it can find at the maximum possible length."

In order to sustain this level of service, TfL has carried out a programme of preventative asset maintenance, and focused operational teams on avoiding small disruptions that can develop into major delays. This includes work to improve train door reliability, improving incident response times, and installing equipment to prevent accidental activation of passenger alarms. TfL's huge programme of infrastructure upgrades has been adjusted to complete works before the games and ensure there are no line or station closures on critical parts of the network during the event.

"Day 1-6 is the soft start for us, and the real test begins on day seven when the stadium opens," says Collins. "We will effectively be operating an extra peak period service in the late evening, and we'll be running the infrastructure pretty hard during this period."

The recent completion of the Victoria Line upgrade has allowed a 21% increase in peak capacity, while on the Jubilee Line, which links central London with Greenwich and Stratford, capacity has been boosted by 33% following the completion of resignalling.

The London Overground network will allow spectators to reach the Olympic Park and other venues without travelling through central London. During the Games trains will run later each night and earlier on Sunday mornings, and there will be extra off-peak services on the former North and West London lines. Mainline operators will also step up their services to meet the additional peaks in demand.

The flagship Olympic service is the 200km/h Javelin shuttle, which operates on High Speed One from St Pancras to Stratford International and Ebbsfleet, using Hitachi class 395 emus. Southeastern is operating up to 12 Javelin services per hour to provide capacity for up to 25,000 passengers per hour. The shuttle operates 24 hours a day between St Pancras and Stratford with a journey time of seven minutes.

August is traditionally a quiet period for London's rail network due to the school summer holiday, yet reducing background demand is still essential to accommodating Olympic traffic. Senior figures have pleaded with commuters to avoid travelling if possible, but it is recognised that even in the most optimistic scenario, working from home is unlikely to be an option for many rail users. "Traffic demand management is the biggest challenge," says Collins. "We've worked with major employers in the city, asking them if they can keep their staff away from London."

TfL expects at least 20% of regular Underground users will change their travel plans during the Games, and is encouraging passengers not to travel or to use alternative routes.

This makes the role of passenger information even more critical. An advertising campaign entitled Get Ahead of the Games has encouraged rail users to consider alternative routes for their journeys, and even alternative modes, to avoid the most congested areas. The website has an interactive map with a slider control allowing users to see where and when congestion is expected on the Underground network. It also offers more detailed information on crowding at individual stations at different times of the day, with a colour-coded grid giving predicted traffic levels.

An Olympic Transport Coordination Centre (TCC) opened last month, bringing together all of Britain's key transport operators and authorities alongside Games organisers to coordinate incident response and manage passenger information and advice. The £9m TCC will remain in operation after the Olympics to improve coordination and communication.

The Olympics could be seen as the ultimate test of London's rail network, and the city's rail operators will undoubtedly learn some valuable lessons from the world's largest sporting event.