Siemens Mobility is more than halfway through its autonomous depot trial project in Potsdam. Richard Clinnick visits the German city to find out more. 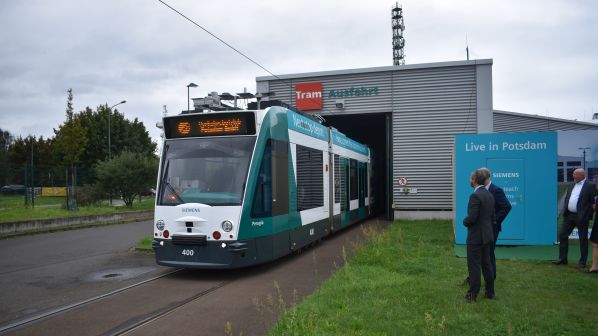 A city to the southwest of Berlin is home to two trials involving Siemens light rail vehicles (LRVs) that could have a revolutionary effect on not only the future of trams, but the future of rail in general.

Potsdam, once home to Bavarian kings, is an unassuming city. Due to driver’s strikes on German Rail (DB) trains, IRJ was forced to travel to the city by road.

Having left the Autobahn there is, almost immediately, an industrial estate that is home to the Potsdam Transport Authority (ViP) fleet of buses and LRVs. This blends in with the surroundings, other than when the barriers descend and an LRV departs the depot or continues shunting around the site.

There is also a large car park in the centre of the site where many of the city’s local bus fleet are based. However, importantly, to the left of the entrance is a small shed, not unlike a container, which is home to staff working on the automated depot trial.

Siemens Mobility is developing its Autonomous Tram in Depot (AStriD) over a three-year period, which began in 2019 and is due to be completed next year. The manufacturer is working with ViP on trials of a self-driving LRV within the confines of the city’s light rail system’s depot.

This followed the start of autonomous trials on the city’s main light-rail network with LRVs operating in real road conditions. This was first displayed to the public in September 2018; now it’s the turn of the depot.

A Combino LRV from the Siemens portfolio has been modified to operate autonomously around the facility. These vehicles date from the late-1990s and have always operated in Potsdam. The manufacturer is keen to stress that not only does this show that the technology can be retro-fitted to older vehicles, but it can be fitted to other manufacturers’ LRVs.

The aim of the Potsdam trial is to prove the safety and efficiency of the technology so that Siemens can take it to market in 2026, although there is a possibility that could be earlier in other parts of the world.

The project is divided into different work packages. Siemens Mobility is developing the self-driving tram and yard management system (YMS). Currently there are three operators based in a small shed who set the route for the LRV before it sets off around the site. Using laptops and a wall of screens, they have full visualisation of where the LRV is and of any obstacles. Furthermore, the system is backed-up so that should there be a problem, such as a battery issue with a laptop or power supply problem, operation can continue.

Speaking exclusively to IRJ during the visit, Siemens Mobility rolling stock CEO, Mr Albrecht Neumann, explains that the company chose Germany to carry out the trials due to the “conservative” safety rules in place in the country. Neumann explained that while there is work at a national level regarding the trials, each German federal state must approve the use of the new technology.

Neumann says that ViP and Siemens chose to work together, with the former already trialling automated trams on its network. “You need the right customer - someone who understands the issues surrounding the trials,” Neumann says.
As a result of the first trial, this second initiative aims to develop a digital depot on the basis of self-driving LRVs. The technical feasibility of the concept is being developed through a number of scenarios. When IRJ visited on August 23, the driverless LRV was able to move around the site, deal with obstacles such as errant forklift trucks and pass through the washing facility before running to a siding.

There is still much more work to do; for instance, those working on the trial explained that the sensor system used by the LRV still has difficulty in distinguishing between moving branches when it’s windy and will come to a halt when it’s not necessary.

The technology here works using sensors fitted to the LRV. These can communicate if the obstacle is fixed or moving. If it’s moving, as long as it is not in the very narrow path used by the LRV (see photo), then it can proceed. During a trip around the facility on-board the LRV, Siemens was able to show IRJ how this worked, with people by the trackside moving, while posts remained fixed.

Siemens says that by making depot automation commercially viable this is the first stage of introducing autonomous driving on a line. And, right from the start, the various legal and economic conditions that must be fulfilled for approval and operation need to be completed.

While the conservative nature of Germany’s safety approvals were attractive at the outset of the project, they are highlighted by Siemens as a significant challenge. But, essentially, if approvals for Germany can be received, then approvals will be possible for anywhere.

“Autonomous driving along the tram route and within the depot relieves our drivers and increases the safety of our passengers and other road users.”

“We are ready to install it in existing trams,” Neumann says. He also told IRJ that with the continuing driver shortage in Germany, the concept is proving popular with potential customers.

Furthermore, he adds that the technology will be offered to customers around the globe, possibly before Europe due to the different requirements in each country.

During the demonstration to the press, concern was raised on social media about the impact on jobs. By introducing AStriD it has the possibility of removing three roles involved in moving one LRV around the site: a driver, shunter and wash facility operator. However, officials on the day argued that this will not cost jobs, rather staff will be redeployed. It was also claimed that the depot driver roles and working in the yards was seen as challenging due to shift patterns, low pay and the perceived monotony of driving around the same depot day-in, day-out.

AStriD is also designed to make operation easier. The LRVs can be prepared without any staff instead of the current situation that can take time. This gives ViP and Siemens the flexibility to put more LRVs into service at short notice should there be disruption.

The project is being funded by the Federal Ministry of Transport and Digital Infrastructure (BMVI) as part of its Modernity Fund (mFund). A consortium featuring Siemens Mobility, ViP, the Karlsruhe Institute for Technology (KIT), the Institute for Climate Protection, Energy and Mobility (IKEM) and Codewerk began research on a fully-automated LRV depot in October 2019.

Additionally, Siemens Mobility is working with KIT to develop the digital map that is the basis for tracking the tram’s location within the depot.

ViP is providing the tram and the depot infrastructure, enabling access to all required data, systems, and facilities, and evaluating the project’s findings from the perspective of a depot operator.

The KIT Institute for Information Processing Technology (ITIV) is contributing its expertise in the specification and digitalisation of depots, the automation of processes, and identifying the necessary data, and is supporting the development of the digital map.

IKEM is analysing and evaluating the legal and economic issues related to the project.

Codewerk specialises in industrial systems and, among other things, develops software for data communication on rail vehicles. In this project, Codewerk is supporting the communication between the tram and control centre and is responsible for integrating parts of the depot infrastructure.

“AStriD is an important milestone on the way to achieving self-driving trams,” Neumann says. “Working with our partners, we are using valuable synergies to digitalise the depot and reduce time-consuming on-site shunting. By automating the depot we can better support our customers in ensuring sustainable value growth over the entire lifecycle and guaranteeing the availability of their trams.”

“Autonomous driving along the tram route and within the depot relieves our drivers and increases the safety of our passengers and other road users,” says Mr Uwe Loeschmann, CEO of ViP . “Autonomous tram operation in our depot with the AStriD system opens up the possibility of automated cleaning, supply and parking processes with central control and increased operational safety.”

At the initial launch of the depot trial, Ms Sabrina Soussan, then a CEO of Siemens Mobility, said that ASTriD is the next big milestone on the way to autonomous trams. Significant progress has been made in Potsdam and by the end of the trial next year, Siemens hopes to have enough data so that the technology can be approved and released to the wider market. More history will have been created in Potsdam.