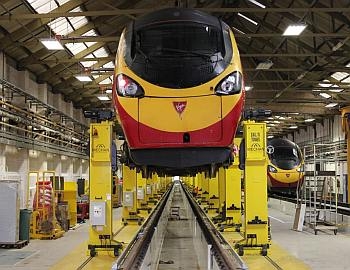 The 44-jack system is the largest ever produced by Mechan and has been ordered in preparation for the lengthening of Pendolino tilting emus used on the West Coast Main Line from nine to 11 cars.
The scale of the installation meant Mechan had to design a new version of its Microlink jack control system for the jacks, which can lift a complete 11-car train. Microlink enables a network of jacks to be operated from any position via a single cable, while a touch-screen provides the operator with constant feedback on the performance of the system.
Categories: Europe, Fleet, Rolling stock
Tags: Britain