Msheireb Properties opened a 2km light rail line in the Mshreireb district of downtown Doha at the end of December. The new line is using hybrid battery-LPG vehicles developed by TIG/m, United States. David Burroughs talks to president Brad Read about the development and application of this technology. 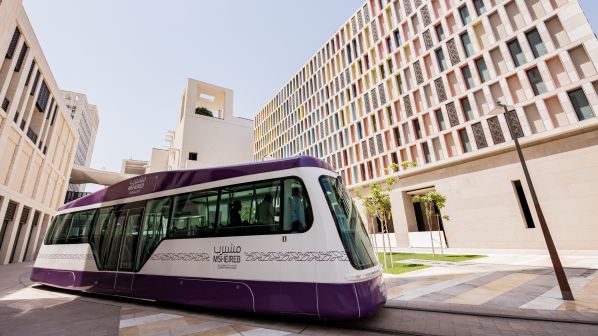 GETTING around the centre of Doha became a lot easier on December 30 when Msheireb Properties launched a 2km light rail line in the Msheireb district, improving connectivity between key locations as well as providing a link with Doha’s three metro lines at Central Msheireb metro station.

Services on the line are operated with a fleet of three hybrid battery-LPG vehicles which complete the 2km circuit in 18 minutes, operating at six-minute intervals. The line has nine stations, including a 400m hop-on hop-off section at Wadi-Msheireb, and benefits from virtual tram detection and priority at traffic signals as well as real-time passenger information, onboard CCTV and Wi-Fi.

The vehicles, which have capacity for 100 passengers, are designed and built by TIG/m and have the ability to operate for 20 hours before requiring recharging, removing the necessity for overhead or ground-based electrification anywhere along the route.

TIG/m, which is based in Chatsworth, California, was launched in 2005 with the goal to provide self-powered vehicles with enough stored energy for a full day of service, and that goal has been realised.

“All of our projects are bespoke,” TIG/m president, Mr Brad Read, says. “We build custom vehicles with the propulsion systems configured specially for the site conditions, but the end goal is always the same: 20 hours of continuous operation with no wayside power requirement at all.”

“Our preference for the generator is a hydrogen fuel cell, but our clients may choose between hydrogen, LPG, or CNG as the fuel for this function.”

The system is battery-dominant, Read says, with each vehicle equipped with two 375V dc 400 amp-hour LiFePO4 lithium iron phosphate battery cells, which the company guarantees will operate for 10 years. These are controlled by a proprietary battery-management system created by TIG/m, which uses a generator to prevent them from being deep cycled and maintains a charge between 30 and 95% of full charge to extend their life.

“The generator set is self-contained and can be swapped in about an hour,” Read says. “Our preference for the generator is a hydrogen fuel cell, but our clients may choose between hydrogen, LPG, or CNG as the fuel for this function. The overall configuration is project specific and designed for 20 hours of uninterrupted passenger service per day while maintaining at least 30% surplus power in the traction battery, thereby avoiding deep-cycles and extending the battery service-life.”

The energy to power the vehicles can be 100% renewable and emissions free, which TIG/m demonstrated with the network it installed in Oranjestad, Aruba, where both the power to charge the batteries and conduct the electrolysis process to create the hydrogen is powered entirely using wind-generated electricity.

The components to manufacture the rolling stock are sourced from suppliers in the United States, except for the battery cells which are manufactured in China, and TIG/m says it is currently working to install its systems in the US, Mexico, the Caribbean, Middle East and China with the most interest coming from southern California.

TIG/m was awarded a $US 33m design build operate maintain (DOBM) contract for the 1435mm-gauge Msheireb light rail line in 2014. The project forms part of the broader Msheireb Downtown Doha development scheme currently being undertaken by Msheireb Properties, a subsidiary of Qatar Foundation.

“From an operational standpoint, all of our designs are based on calculations and we’ve far exceeded our calculations for efficiency so far, so we’re happy with the performance.”

Read says operation has been running smoothly since the line opened in December, and work on a second phase, which will extend the line by 500m, was also completed that month. This section is now undergoing testing and is expected to enter service by the end of the year. TIG/m is also providing maintenance alongside SNC Lavlin, which is operating the line.

“From an operational standpoint, all of our designs are based on calculations and we’ve far exceeded our calculations for efficiency so far, so we’re happy with the performance,” Read says.

TIG/m provided its standard next-vehicle arrival signalling system for the fleet, but also worked alongside Traffic Tech Gulf (TTG), which installed an Opticom traffic control system on the road network. This controls the traffic lights to provide a right-of-way for emergency vehicles and other priority vehicles such as LRVs, which meant both systems needed to be installed on the TIG/m vehicles and be able to communicate with each other.

While the fleets delivered by TIG/m have so far been operator controlled, Read says the company has been developing the capability for autonomous operation, including at-grade operation in mixed traffic.

“It could be in operation now, we just don’t have a client for it yet,” he says. “We proposed it on several projects including the downtown Doha Westbay Peoplemover system.”

THE 2117km Gulf Railway is starting to make progress according to Mr Khaled Alolyan, transport director in the economic affairs sector of the Cooperation Council for the Arab States of the Gulf (GCC-SG).

The railway will run along the east coast of the Arabian peninsula from Kuwait south through Saudi Arabia, Bahrain, Qatar, and the United Arab Emirates to Oman, and includes the construction of a new causeway especially for the railway to link Saudi Arabia with Bahrain. Saudi Arabia and the UAE are the only countries which currently have main line railways.

“The UAE has completed 265km of railway and is now working on the construction of approximately 135km to link with Saudi Arabia,” Alolayan told IRJ. “Saudi Arabia is currently building around 200km as part of the project. The other four countries are in the final design stage and are developing their requirements to implement the project.”

The Gulf Railway will only be operated by diesel traction and will be designed for 220km/h for passenger trains and 80-120km/h for freight trains. Each country will determine its own needs for locomotives, passenger coaches and freight wagons and will procure the locomotives and rolling stock.

“GCC-SG is coordinating with the customs and immigration authorities in each member state regarding their requirements, and a number of organisational and technical studies are currently being prepared for the project,” Alolayan says.