Recognising the need to be competitive, efficient and sustainable, Lithuanian Railways (LTG) has undergone its biggest reorganisation since the country gained independence three decades ago. David Burroughs talks to LTG CEO Mantas Bartuška about what has been achieved so far, and how the railway is working to improve access to rail. 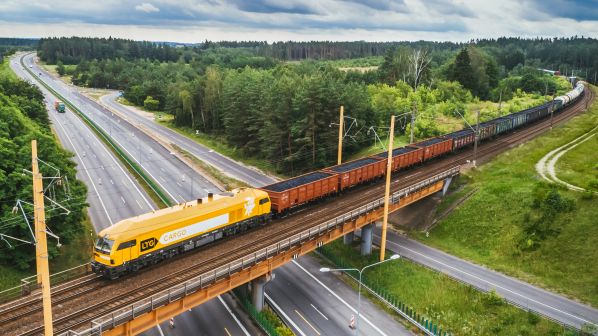 LTG is hoping to increase freight volumes as well as electrification, in order to support Lithuania’s climate strategy. Photo: LTG

WHILE possessing one of the lowest rates of passenger rail use in Europe, Lithuania has recorded some of the fastest rates of growth in recent years. Lithuanian Railways (LTG) is looking to build on this momentum by creating a more modern rail service that meets the needs of passengers and freight customers both domestically and internationally.

Indeed, LTG CEO, Mr Mantas Bartuška, says a restructuring and refocusing undertaken over the past few years has resulted in some of “the greatest changes since Lithuania regained its independence.”

Passenger and freight services have been split into separate divisions, with the freight division operating on a commercial basis while the passenger division is subsidised by the Lithuanian government. Infrastructure management has also been split off to a separate subsidiary in line with European regulations.

This reorganisation culminated in the rebranding of the company and its three new subsidies in July. The company has retained its Lithuanian name, Lietuvos Gelezinkeliai, but introduced a new abbreviation, LTG. The passenger transport division was renamed LTG Link, the freight division became LTG Cargo, and the infrastructure manager was named LTG Infra.

As LTG targets future competition abroad, it is important to keep the new brand names simple and easy to understand, Bartuška said during the launch.

“We are implementing our ambition to be a leader in the region and fighting for our position.”

The new group logo features an arrow symbol, which LTG says embodies movement and progress, and symbolises the group’s mission to connect people and businesses. The divisions’ colours - yellow, green and red - mirror the colours of the Lithuanian flag, reflecting the commitment to contribute to the welfare of the country.

The reorganisation was prompted by an understanding that the country needed a railway which is competitive, efficient and sustainable, Bartuška tells IRJ.

“The target was to have a strong railway system,” he says. “We established a clear corporate structure, and each subsidiary has clear commitments to achieve their goals.”

Bartuška says the infrastructure manager is now functioning in a more transparent manner, while the subsidy structure for passenger operations has been changed in line with European best practice. The freight division is also operating in a more competitive, customer-oriented way. “These changes have helped us to crystallise our activities and focus on our goals,” he says.

Bartuška adds that this put the company in a good position to prepare for the onset of Covid-19, and despite continuing uncertainty, he is hopeful that LTG can come through the pandemic relatively unscathed.

The crisis caused passenger numbers on LTG Link’s services to drop by nearly 90%, although this has since recovered to around 10% less than last year’s figures. Freight volumes were impacted but less severely, dropping 5-6% year-on-year. However, Bartuška says this is still seen as a positive result, as 2019 was an extremely successful year for the freight division. August and September recorded higher freight levels compared with 2019, setting a positive trend for the year.

While discussions are underway around whether LTG could receive some government support, the operator might yet achieve a small profit this year without it. “Given that there have been some very significant drops in the neighbouring markets, we believe we are doing very well,” Bartuška says. “We are implementing our ambition to be a leader in the region and fighting for our position.”

The company also had the agility to adapt to the rapidly developing situation brought about by Covid-19, including organising a passenger service from Germany to Lithuania within a day.

“If somebody had asked me how long it would take to plan and organise an international service, I would never dream that it’s possible to do it over one day,” Bartuška says. “Covid-19 showed that a lot is possible when you are in these difficult situations.”

During the development of its new strategy, LTG invited input from the public, politicians and experts in an effort to understand the expectations of different groups and highlight the priorities for the future. Based on these discussions, LTG has outlined 10 commitments:

Electrification of the Vilnius - Klaipeda east-west corridor, which carries three-quarters of LTG’s freight and two-thirds of all passenger journeys, is already underway after LTG awarded a 50:50 joint venture of Spanish firms Elecnor and Abengoa subsidiary Instalaciones Inabensa a e363.1m contract in December 2019.

The project includes electrification of the 34km Vilnius bypass and the 320km Klaipeda - Kaisiadorys main line, and will increase the electrified share of the network from 7 to 40%.

“We will still be behind the European average but we have a clear vision and a clear direction to go towards with this green mobility, and electrification is an ice breaker to start that,” Bartuška says.

With the electrification project due to be completed in 2023, LTG is undertaking a market exploration exercise with manufacturers of a potential upgrade or replacement of its fleet to make use of this new infrastructure.

This will support LTG’s target of achieving net zero emissions by 2030. Bartuška admits that this is probably not possible and it will likely be 2050 before this is fully realised. However, he says the company is setting the ambitious target in order to challenge the perception of what can be achieved over the next 10 years.

“It’s not only the investments itself, it’s also very important to change peoples’ mindset… so that when they travel the choice of using an environmentally friendly solution is something that drives them to choose a train,” Bartuška says.

An alternative option, which Bartuška says has been raised during the market consultation, is the possibility of introducing battery trains on some sections of non-electrified lines.

Another area where LTG is looking to contribute to the reduction of emissions is the development of intermodal freight, both internally and internationally. In October, LTG operated a test train carrying semi-trailers from Germany to Lithuania and back, and it is also looking to develop corridors to carry intermodal trailers within the country.

“Covid-19 showed that a lot is possible when you are in these difficult situations.”

This was boosted in mid-October when a service carrying semi-trailers was operated from Kaldenkirchen, Germany, to an intermodal terminal in Kaunas, Lithuania, for the first time, as part of LTG’s preparation to launching regular semi-trailer services on both the 1435mm and 1520mm-gauge networks.

“We see these south-north, east-west corridors as a great opportunity for the railway to develop green transport and develop intermodal solutions,” Bartuška says.

Competing with road is a difficult task, and there are a number of improvements required in order to facilitate a modal shift. This includes more efficient systems to load and unload freight and semi-trailers, as well as better digitalisation to improve access to and the exchange of data.

“We are seeing increasing competition over the years and our expectation is that in the coming years competition will be constantly increasing,” Bartuška says. “We have to adapt to such a situation and our freight business is transforming its activities to be more efficient, and also using these opportunities to develop its activities not only in the internal market but also abroad.

“It’s a great driver for the freight market to be more efficient, provide better services, find new solutions and develop new products, to think outside the box in order to provide better mobility for industry and the economy.”

LTG is looking to develop rail freight corridors and attract some of the freight currently carried by two million trucks a year across the Polish-Lithuanian border. LTG Cargo is seeking strategic partnerships with freight operators in the Polish market to develop routes between Poland and Lithuania through its LTG Cargo Polska subsidiary.

PKP Cargo and LTG Cargo signed an agreement in September to form a jointly held operator to handle intermodal rail freight flows between Lithuania, Poland and western Europe. The new company is responsible for last mile delivery and document processing, as well as rail transport.
Both company’s share capital in the partnership is worth Zlotys 1.3m ($US 340,000) with each partner holding a 50% share. Under the agreement PKP Cargo is guaranteed to handle transport services in Poland offered from Lithuania.

LTG Cargo, which was granted a safety certificate by the Polish Railway Transport Service (UTK) at the end of June, also plans to start operating freight services in Poland in the near future with a regular service between Mockava and Bialystok.

In addition, LTG Link and PKP Intercity signed a letter of intent in September to develop a cross-border service between Vilnius and Warsaw, which is expected to offer a journey time of eight hours when it launches in late 2021. Services will operate using modern rolling stock featuring air-conditioning, Wi-Fi and power sockets. The train will operate over both 1520mm-gauge and standard gauge lines.

These partnerships with Poland provide important connections with the rest of Europe, and this international cooperation is set to strengthen with the development of the 870km standard gauge Rail Baltica project. The project is designed to integrate the Baltic States into the European rail network, connecting Helsinki, Tallinn, Pärnu, Riga, Panevezys, Kaunas, Vilnius, and Warsaw.

LTG Infra is responsible for developing the Lithuanian section of Rail Baltica. Some parts are already under construction while design work is underway on other sections.

“I am confident the project is on track,” Bartuška says. “We have a goal to complete it by 2026, which is very ambitious but still feasible. This project will definitely be a game changer in the region that will provide new opportunities and new parameters for our societies.”

The biggest change will be Rail Baltica’s line speed of 250km/h, a major increase from Lithuania’s current maximum of 140km/h.

“I think people will turn to use fast trains more often, maybe instead of choosing planes, again supporting this green direction because we know that airplanes have very high emissions,” Bartuška says.