NOVEMBER 14 marked an important milestone in the construction of the first metro line in Panama City as Panama's president Mr Ricardo Martinelli was able to travel the full length of the initial 13.7km section of Line 1 during a trial run. 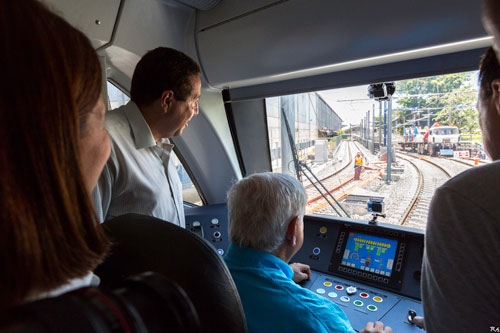 President Martinelli at the controls during a test run on November 14.

President Martinelli was joined by the executive secretary of the metro, Mr Roberto Roy, members of the cabinet and executives from the FCC-Odebrecht consortium constructing the metro which expects to open the first phase in March.

Construction of the Panama metro got off to a quick start in November 2010 and exactly three years later it was 94% complete. Work is currently focused on testing and commissioning of the trains and installations and finishing works at stations. Trial automatic operation was due to start last month, with trains controlled from the operations centre at the stabling yards and workshops at Albrook.

The last of the 19 three-car Metropolis trains being built by Alstom at its Santa Perpetua plant in Spain is expected to arrive in Panama City this month. Each train can accommodate up to 600 passengers, and services will operate at 3.5-minute headways initially, which will enable the metro carry up to 15,000 passengers/hour/direction during peak periods. But by running five-car trains at 1.5-minute headways it will be possible to ramp up capacity to 40,000 passengers/hour/direction in the future.

Alstom is responsible for engineering, integration and commissioning of the electromechanical works for the project. In addition to supplying the rolling stock, Alstom is installing traction substations and its Urbalis communications-based train control (CBTC) system.

The Panama Metro Secretariat (SMP), which is the contracting authority for the project, confirmed on November 27 that the cost of building the initial 13.7km line from Albrook to Los Andes with 12 stations and 19 trains has been held at the $US 1.88bn price agreed in 2011.

However, the project has since been expanded to include an additional intermediate station at El Ingenio, extra access points at stations, a 2.1km extension from Los Andes north to San Isidro, and an additional train. This means the total cost of the metro is now just over $US 2bn. The civil works for the extension started in September 2013 and are expected to be completed in August with final completion scheduled for the end of the year.

Not only was it a challenge to build the initial section of the metro within 36 months, but the task was made even more challenging because Panama lacks the local engineering expertise which the main contractors would normally expect to call upon for a project of this nature. "We had to import everything we needed and plan what we needed up to six months in advance to have all the materials in time," explained Mr Santiago Erans, construction manager of elevated works with FCC. "Sometimes we had to plan what we needed even before the design had been completed. This meant we had to plan, design, and build everything with great care."

The consortium had to hire between 600 and 700 people to work on the project. While 90% of the staff taken on are local, the remainder come from Spain, Colombia, France and Brazil. The total workforce for the project including sub-contractors numbers around 5000 people.

On November 25 President Martinelli sanctioned the Metro Act passed by the National Assembly to create a new state-owned but financially-autonomous company called Metro Panama to not only operate and maintain the first line but also take over responsibility for planning and executing infrastructure works.

Staff training started well before Metro Panama became a legal entity. In January a group of Panamanians were given theoretical training in metro operation by a team from Barcelona metro, and in March a group of 19 Panamanian trainees was dispatched to Santo Domingo Metro, which is operationally similar to the Panama metro, to gain practical experience. In October, 91 metro recruits started a six-month training course to become drivers or station staff.

Panama City has a population of 1.7 million and SMP has drawn up a transport master plan which calls for the investment of more than $US 10bn up to 2035. Under the plan, the construction of two more metro lines is envisaged, along with a commuter rail line running from the city centre to Arraiján and Chorrera on the western side of the Panama Canal, and a tram line from Cinta Constera near May 5 metro station south to Casco Antiguo. A proposed fourth bridge spanning the Panama Canal could include light rail tracks.

The first concrete steps to implement the master plan occurred in October with the award of a contract to conduct a feasibility study for metro Line 2. This 24km elevated line could cost around $US 2bn to construct and the government is looking for ways to fund it.

Whatever the outcome is of these studies, the opening of the first metro line will give Panamanians their first experience of how a modern metro can transform travel and life in a modern-day city.