German Rail broke two of its own records - for passenger traffic and revenue - in the first half of 2012, and despite a drop in freight, Ebit also grew strongly. David Briginshaw reports from Berlin on DB's cautious optimism for the rest of the year. 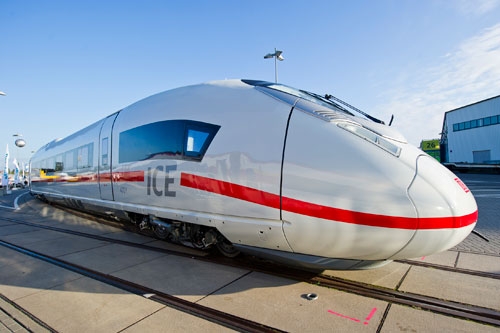 GERMAN Rail's (DB) CEO Dr Rüdiger Grube had much to be cheerful about when he and his fellow management board members presented DB's results for the first half of 2012 in Berlin on July 26. Despite the eurozone crisis, the sovereign debts crisis, and the uncertain economic outlook even in Germany - Europe's economic power house - DB has managed to improve its financial performance and achieve new milestones in passenger traffic.

"During the first six months of this year we recorded revenues of €19.5bn," says Grube. "This is €616m more than in the first half of 2011 and is the highest six-month revenue figure in the history of DB." He describes the growth in earnings as "an important step on our path to becoming an economically successful market leader."

While revenue showed a 3.3% increase, Ebit grew by an impressive 16.6% to €1.3bn. "When we compare this with the comparable figure for the 2009 crisis year we can see that we have almost doubled our Ebit since then," Grube explains. Net profit increased by almost 23% to €794m. "Return on capital employed rose from 7.2% to 8.1%, showing how strong our company is and bringing us a step closer to our target of 10%," he says.

The strongest growth was recorded in passenger traffic, with DB's long-distance passenger business reporting a 7.9% jump in revenue, and its international passenger division, DB Arriva, achieving an 8.6% increase. Ridership increased by more than 40 million year-on-year to exceed 1 billion for the first time, while passenger volume increased by 4.4% to 39.7 billion passenger-km.

Mr Ulrich Homburg, DB's board of management member for passenger transport, attributed the growth in passenger traffic to several factors. Operations have been very stable so far this year thanks to a milder winter than in 2011 and better management of engineering works which has helped to improve punctuality by 2.2% during the first half of 2012. Currently 93.5% of trains arrive within 15 minutes of schedule, which is slightly ahead of target. Homburg also says DB's effort to improve train comfort is paying off. "We hear that our staff are providing good service to passengers," he says. "Our competitiveness has not worsened and we are competitive with the car on price."

DB has finally started to take delivery of Talent 2 emus from Bombardier, although DB's chief financial officer Dr Richard Lutz says there is still a delay in delivery of the trains compared with agreed deadlines, due to the difficulty in getting them approved for operation.

In early June, the Federal Railway Agency (EBA) approved the new class 407 ICE trains for single operation, but Siemens and DB are still awaiting approval for multiple operation. Siemens has told DB that eight trains will be delivered by the end of the year. "This will mean that we will finally have a somewhat greater number of trains available for use as a reserve in the coming winter months," says Grube. He also confirmed DB's commitment to modernise or renew its entire long-distance passenger fleet by 2020.

DB is currently investing €250m to refurbish more than 770 locomotive-hauled long-distance coaches with new interiors, more modern restaurant cars, and reliability modifications. The Hamburg - Cologne - Stuttgart Intercity route is the first to receive the renovated coaches and will have completely switched over by December.

A new open-access operator, HKX, recently launched a service in competition with DB on the Hamburg - Cologne section. "I'm happy that this is finally happening," says Homburg. "We have always said that competition is part of business. Our competitors decide what they want to do, but we won't change our offer in terms of fares or services."

Turning to freight, DB Schenker Logistics reported a 3.3% increase in revenue in the first half of 2012, but as Lutz explains, the picture is less rosy. "On a comparable basis, the increase declines to only 1% due mainly to exchange rate factors. The weak economic climate is also reflected in DB Schenker Rail where revenues are roughly unchanged compared with last year." While DB Schenker Logistics posted a €31m increase in Ebit for the first half, DB Schenker Rail recorded a €34m fall. This reflects a 2.6% drop in railfreight traffic to 202.3 million tonnes. Volumes fell by 4.9% to 54 billion tonne-km.

Dr Karl-Friedrich Rausch, DB's management board member for transport and logistics, says the results are broadly in line with expectations and he is confident the final result will be better than this. "You can see we have a weakening, which started in the last quarter of 2011, but it is not a crisis," he says. "In Britain, traffic is very stable, while in France traffic is growing with new automotive customers. Spain is in recession, which is not a surprise and we had already planned a restructuring here, and in Poland we are taking restructuring measures.

"In Germany, steel traffic is going down, and automotive and chemicals traffic are both weak, but sea freight is still growing so intermodal railfreight is growing strongly. There are now signs that traffic is stabilising overall in Germany, and so by the end of the year we expect to be only 1% down compared with 2011."

Looking at the overall picture, Lutz is cautiously optimistic: "We are seeing a noticeable weakening of the economy, but I don't think we're on the brink of a global recession as we were in 2009," he says. "I see positive developments in passenger and infrastructure over the rest of the year. Such an assessment is based on the assumption that the problems relating to the euro crisis are resolved in such a way that confidence returns to the markets and that the real economy can return to stable and sustainable rates of growth."

Nevertheless, DB has reduced its revenue forecast for 2012 by €1bn to €39bn mainly because of the fall in freight traffic, although DB still expects to reach its Ebit forecast of €2.6bn for the year.

While gross capital expenditure increased by 13% in the first half of 2012 to €3bn, net capital expenditure, which DB funds itself, soared by 34% to €1.4bn. For the year as a whole DB expects to invest €4bn out of its own resources compared with €2.6bn in 2011.

Net financial debt rose 2.2% in the first six months of 2012 to just under €17bn, but Lutz says this was affected partly by paying a dividend of €525m to the government. He expects to end the year at around €16.6bn, which is about the same as in 2011. "The reduction in our debt level won't be as good this year as it was last year, because of the level of investment, but I think it's the right course to take," Lutz says.

Grube says that while it is important for DB to expand both organically and through acquisitions, expansion is being affected by the level of debt. "First, I want to reduce our debt to below €15bn, and then we will be able to start acquisitions again."

Grube said in March that he wanted to double DB's turnover to €70bn by 2020, which equates to an average increase of about 7% a year, a target Grube describes as "ambitious, but not impossible." But, as he explained to IRJ last month, he expects some of the extra revenue to come from acquisitions: "We want to achieve turnover of close to €60bn through organic growth, while acquisitions should take care of the rest."

Looking at the outlook for the rest of the year, Grube recognises the challenges ahead, but he believes DB is well placed to withstand any further downturns in the economy. "We see the economic uncertainties, but we remain confident," he told IRJ. "After a successful first half of 2012, we don't see any reason to rethink our financial targets. Of course we are focused on how the coming months progress. The current economic outlook is extremely uncertain, and it goes without saying that we are aware of the risks of our economic environment.

"We have areas of business [passenger and infrastructure] that are very resistant to swings in the economy and continue to reliably deliver stable revenues, good earnings, and provide liquidity even during times of crisis. We are not dependent on a single economy because we are well diversified in terms of risk."

Grube and his team seem to have done a good job so far steering DB through quite choppy economic waters, and railways generally are performing better than other modes, so provided the European economy doesn't nosedive during the second half, DB should be able to achieve its targets for the year.