To combat a swelling population, Perth is pursuing the construction of four new suburban rail lines, which will add 72km to the network. Mark Carter reviews progress so far. 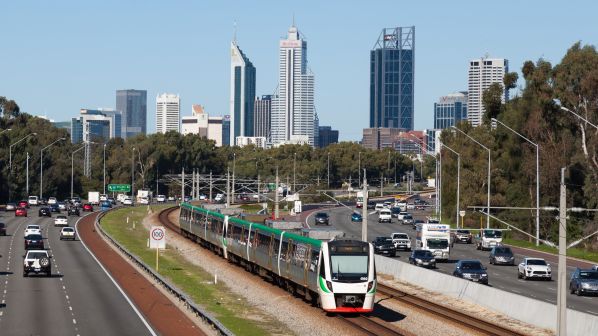 Four new lines and extensions will be built in Perth adding 72km to the existing suburban network.

WITH the population of Perth forecast to grow from the current 2.35 million to 3 million by 2050, the state government of Western Australia (WA) has realised the need for an ambitious programme to improve the scale and reach of the suburban rail network, branded Metronet.

A raft of expansions and upgrades for Perth’s suburban rail network were grouped together under the Metronet banner following the 2017 WA state election. Work had already commenced under the previous administration on the Forrestfield - Perth Airport line and planning for several other initiatives was already underway.

In addition to the need to cater for population growth, a recent audit by the federal government body, Infrastructure Australia, found the increasing cost for road congestion in the Perth region is set to more than double by 2031, from $A 1.5bn ($US 1.15bn) to $A 3.5bn.

The audit - An Assessment of Australia’s Future Infrastructure Needs - also found that, “Perth residents without use of a car have significantly reduced access to social infrastructure today and in the future. In central Perth, public transport offers a realistic alternative to car ownership and use. However, on the urban fringe and in other outer areas this is not the case.”

The audit estimated that demand for public transport will outstrip population growth, rising 42% by 2031, as the result of population increase and new lines opening.

The federal government has shown its faith in Metronet by allocating more than $A 2bn so far towards the various Metronet projects.

Four new lines and extensions will be built adding 72km to the existing suburban network. This will include removing level crossings along with major upgrades to several stations.

In line with the rail expansion, 5000 hectares of land will be made available around new stations to allow for investment in housing, jobs and services for growing communities.

The federal government has shown its faith in Metronet by allocating more than $A 2bn so far towards the various Metronet projects, including $A 1.1bn from its 2017-18 $A 10bn National Rail Programme - a major commitment to investing in passenger rail networks in Australia’s largest cities.

A flagship scheme within the Metronet project is the $A 1.86bn Forrestfield - Airport link, jointly funded by the Australian and WA governments, which will deliver a new rail line to the growing eastern suburbs of Perth and link the city centre with its domestic and international airport.

Planning for the 8.5km link began in 2008 and the project was eventually given the go-ahead in August 2014 following state government approval. The federal government is contributing $A 490m towards the cost, above its other commitments to Metronet.

Construction finally commenced in 2016 following the award of the major construction and maintenance contract to the Salini Impregilo-NRW Joint Venture. The contract includes maintenance for 10 years once the project is completed in the second half of 2021.

In mid-2017 two Mixshield tunnel boring machines with dual-mode technology capable of adapting to variable ground conditions began excavating 8km-long 7m-diameter twin-bore tunnels between Forrestfield and Bayswater. Around 70% of the tunnelling had been completed by September with completion expected next year.

The government hopes the new line will support domestic and international tourism with improved access between Perth and the airport.

The new line leaves the existing Midland Line near Bayswater and then runs to Forrestfield through the tunnels, with three new stations at Redcliffe, Airport Central and Forrestfield.

Airport Central station will be located adjacent to Terminal 1 with an elevated, enclosed walkway providing a link between the terminals and the new underground station. The government hopes the new line will support domestic and international tourism with improved access between Perth and the airport, which handles around 14 million passengers per annum. The planned journey time from the airport to the city centre is 18 minutes.

Forrestfield station will provide an accessible transport option to and from the city for Perth’s eastern suburbs and foothills, with the station precinct incorporating a bus interchange, 180 secure bicycle bays, and parking for up to 1200 cars.

Two consortia, MetroConnex (Acciona, Aurecon, Clough, Georgiou and WSP) and Newest Alliance (CPB Contractors and Downer), have been shortlisted to build the Thornlie - Cockburn link and the Yanchep extension. The winning bidder is expected to be announced before the end of the year with work commencing shortly afterwards.

The two projects will be delivered under one package as part of a bundled competitive alliance model, and more than 3000 jobs are expected to be created during construction.

The $A 535.8m Thornlie - Cockburn link is a 17.5km line connecting the existing Armadale rail line to Cockburn Central station on the Mandurah Line. The project will provide two new stations and park-and-ride facilities at Nicholson Road and Ranford Road in Canning Vale.

The aim is to open up opportunities for integrated, liveable communities around the proposed Nicholson Road station and provide better public transport connections for the light industrial area surrounding Ranford Road.

The $A 520.2m Yanchep extension project will extend the existing Joondalup Line by 14.5km from Butler and Yanchep, with new stations, bus interchanges and park-and-ride facilities at Alkimos, Eglinton and Yanchep.

In the short-term, the WA government hopes the project will help develop activity centres by stimulating new employment opportunities in the Yanchep Strategic Metropolitan Centre and support higher density land use.

The federal government has contributed $A 700m in total towards the two projects from its National Rail Programme and both lines are planned for completion in 2021.

The proposed Morley - Ellenbrook line will add a 21km line from the existing Midland Line just east of Bayswater to connect communities in the northeastern suburbs of Perth comprising Morley, Noranda, Malaga, Bennett Springs, Whiteman and Ellenbrook. The new line is expected to reduce travel times between Ellenbrook and Perth from one hour to 30 minutes.

The project is still currently in the planning stage with the WA government preparing a submission for Infrastructure Australia. The federal government has already committed $A 500m toward the $A 1bn estimated cost of the project.

In September, the Railway (Metronet) Amendment Bill 2019 was introduced into the WA Parliament authorising construction of the Morley - Ellenbrook line, with the government confirming that procurement for the project will commence in early 2020.

To cater for the Metronet expansion and to retire Perth’s older EMUs, the WA government awarded a $A 1.6bn contract to Alstom in August to supply 41 six-car EMUs.

The contract has been identified as a strategic project under the WA Jobs Act, which includes a requirement for 50% local manufacturing content.

Delivery of the new fleet is due to begin in 2022, with all the trains expected to enter service by 2029.

The 246 coaches include 102 to service the new Metronet projects and 144 to replace the ageing A-series fleet.

The contract also includes 30 years of maintenance, which Alstom will deliver using its HealthHub solution, already in use on the Sydney Metro and designed to combine a range of condition monitoring systems to coordinate a predictive maintenance schedule.

The WA government and Alstom are currently determining the final design of the vehicles. Each six-car set will carry 1200 passengers and will include additional and wider passenger doors for quicker access along with USB charging points, LED lighting and regenerative braking.

Under a separate contract yet to be awarded, a $A 50m assembly and maintenance facility will be built in the Perth suburb of Bellevue to accommodate the new fleet.

Combined with additional projects such as the multi-million dollar upgrades of Bayswater and Midland stations, and the removal of several major level crossings, the Metronet programme will help transform Perth’s suburban rail network. For a city of modest size, Perth has always been at the forefront in developing its suburban rail network compared with other Australian cities.

Metronet is also investigating the partial revival of the ill-fated MAX light rail project which was abandoned in 2016 before work started, due to cost constraints and changes in government. The WA Department of Transport is currently trying to better understand the transport and land use needs, as a prelude to preliminary network identification.

While Sydney and Melbourne grapple with projects to just lift the capacity of their existing networks, Perth has been busy extending the reach of its network to bring affordable public transport to its outer suburbs, and perhaps in the case of light rail, its inner suburbs.