With its lineside fibre optic telecoms network due for an upgrade, Network Rail is looking to save up to £1bn by contracting a third-party to fund installation of the fibre, in return for the use of the spare capacity created by the upgrade. Brian Hatfield, Tim Stephens and Harriet Hepburn explain to David Burroughs how the scheme could be a win-win for all parties. 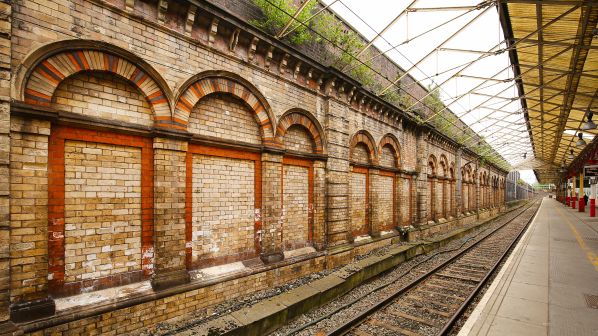 The fibre optic cables can be easily laid in the ducting running alongside much of the network, making the installation easier than beneath a road. Photo: Shutterstock/Jillian Cain Photography

WHEN reviewing its telecoms assets two years ago, British infrastructure manager Network Rail (NR) found its need to upgrade assets coincided with a strong appetite to improve broadband access across the country.

NR subsequently announced a plan in April to invite private companies to invest in the renewal of the lineside telecoms infrastructure in return for the right to commercialise spare bandwidth from the upgraded network.

More than 16,000km of data cables which carry essential information for signalling, trackside sensors and CCTV, as well as providing broadband internet for trains, depots and offices, are due to be upgraded. The plan aims to secure the necessary funding for the upgrades without relying on subsidies from the government or passengers.

As NR will not require the full capacity of the new fibre optic cables, there will be sufficient bandwidth for third-parties to run their own telecoms services, making use of the significant geographical reach of the national rail network to meet demand for improved high-speed fibre connectivity across Britain, particularly in rural areas. These companies will also be able to take advantage of the lower cost of fibre deployment along the railway when compared with other deployment methods such as beneath a road.

“We needed to upgrade our assets in a way that would deliver what we need for the railway, but also support delivery of what the country needs,” says NR director of corporate finance & business development, Ms Harriet Hepburn. “If you combine that with the clear market interest, there was a proposition where we stuck to what we’re best at, which is doing the railway stuff, and we brought in a partner who would bring in the capital to fund the upgrade, but also stick to what they’re best at which is doing the commercialisation.”

“We needed to upgrade our assets in a way that would deliver what we need for the railway, but also support delivery of what the country needs.”

The current telecoms infrastructure uses 24-strand fibre optic cable. NR is looking to install 432-strand cables at a minimum, envisaging a 50:50 share of capacity. There will be a physical separation between the fibres allocated to NR and its partner, which will run through the same cable.

“It’s an exponential increase in the capacity that will be available to the railway, which will enable us to do the whole host of data-driven things that modern businesses and modern railways are looking to do,” Hepburn says. However, NR is open to the partner installing a higher-capacity cable, such as an 864-strand cable, in order to provide more bandwidth for commercialisation. “If you look at a fibre deployment, the cost of the cable is quite a small percentage of that, most of the costs are around actually doing the deployments. So you can expand out the capacity without it costing too much more.”

The overall concept of contracting out the use of the spare capacity is not new, Hepburn says. However, previous attempts were unsuccessful as they were focused on NR commercialising the spare bandwidth itself.

“We were always getting phone calls from people who were interested in finding a way to work with us on a proposition like this, and use the rail side corridor for fibre deployment,” Hepburn says. “I think that’s because it’s probably about the only area where you can say that doing something alongside the railway is cheaper and easier than doing it with alternative methods.”

“For us to be safer, for us to perform better, we need to do things differently.”

As railways are generally straighter and more direct than roads, and already have a trough for cables running alongside them, it is easier to install the fibre than it would beneath a road.

Increasing the capacity and renewing the infrastructure will remove points of failure in the network, as well as reducing the need for maintenance, says NR business development director, Mr Brian Hatfield. “For us to be safer, for us to perform better, we need to do things differently. If you want to get proper train control and the efficiencies with the likes of traffic management, you need the capacity to be able to do that.”

Following the call for expressions of interest in April, NR released the information memorandums on May 20. While the overall timeline for the procurement process will depend on the level of interest from bidders, NR hopes to sign a contract by the end of the year to allow deployment to begin in 2022. The infrastructure could then take three to four years to deliver, although this timescale is dependent on the winning partner.

“We do have some parameters in there, though, where it must meet railway timescales and needs,” Hatfield says. “So for all those sections where we need it, they’re going to have to meet this timescale. For those other sections where it’s just enhancing our capacity, then we are prepared to work with them.”

NR is looking to work with a single provider for the full 16,000km network, although it envisages this will be a consortium due to the funding capital and the knowledge of both the telecoms and railway systems required.

While the system will provide “revolutionary” benefits for the railway in terms of capacity and safety standpoint, the actual installation of the cables themselves will be a relatively simple process, and one that NR and its contractors undertake on a regular basis.

“We’re upgrading an asset, and that’s a well-trodden path,” says NR Telecoms commercial director, Mr Tim Stephens. “But the benefits that gives us are big, and aligned to somebody else getting benefit from the asset. We’re in quite a nice situation of it being something that the railway is used to doing and contractors are used to doing, but there being a lot of long-term benefits hanging off it.”