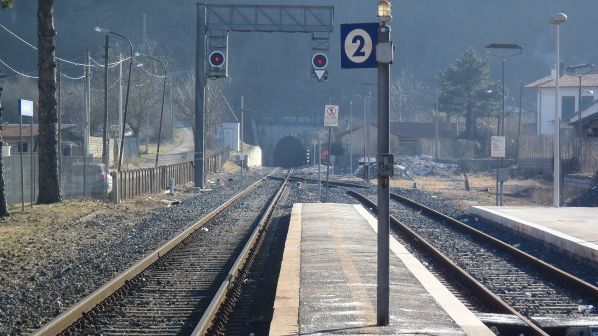 The trials took place on a 20km line between Capistrello and Civitella Roveto which includes two stations and a passing loop.

THE positive experiences with ERTMS on both the high-speed network and conventional lines in Italy, and the different cost-efficiency analysis performed, led RFI to reconsider how to implement ERTMS. This means switching from the “dual on track” approach, which needs a long period where trackside ERTMS is overlapped to the national train control system already in force (NTC), to a dual onboard approach where the trains are fitted with both systems in order to be able to run on both ERTMS pure lines and on NTC-only lines.

The dual onboard approach is the cornerstone of an accelerated ERTMS deployment programme drawn up by Italian State Railways (FS) to fit the entire 16,000km Italian network with a pure central command system (CCS) between 2022 and 2035. This means installing ERTMS without NTC and lineside signals, both of which will be removed during interlocking renewals, ERTMS implementation and vehicles upgrade with on-board ERTMS sub-systems.

The accelerated ERTMS deployment programme includes equipping 300km of regional lines per year with ERTMS. These low-traffic lines are mainly fitted with obsolete interlockings and traffic management systems (TMS), which are usually expensive to maintain.

ERTMS can increase the efficiency, capacity, safety and reliability of these regional lines compared with legacy systems. The benefits include:

With the accelerated ERTMS deployment programme and in the context of the CCS without overlap to legacy systems, the CCSp Regional programme is RFI’s answer. In addition to ensuring a high level of safety and reliability as well as interoperability with European standards, CCSp Regional will facilitate the removal of lineside signals, track circuits and axle counters, the NTC systems, and level crossing treadles and track circuits.

In its full configuration, the integrated CCSp trackside system will allow:

In addition, it is intended to explore the GSM public radio system in parallel with GSM-R, to optimise radio network performance and reduce the cost of GSM-R infrastructure.

The results of the ERSAT tests will allow the introduction of the virtual balise function and the possible use of a satellite telecommunication system (in combination with the ground radio system) to exchange train-track data, with a further possible reduction in investment and maintenance costs.

The virtual balise substitutes the physical repositioning balise with the same level of safety. The first application of the virtual balise is planned on the Novara - Rho line, which will provide the opportunity to demonstrate that the number of balises on the line can be significantly reduced.

These functions together with the use of virtual balises and ATO can be developed in a scalable way and implemented depending on the cost:benefit analysis.

A few years ago, RFI started a risk analysis to draft the ERTMS specification for regional lines. Specifically, RFI provided the engineering services needed to develop functional and technical specifications to implement ETCS Level 2 on the Arezzo - Stia and Arezzo - Sinalunga single-track lines managed by the local infrastructure manager LFI. After the positive results of the risk analysis and the approval of the Italian NSA, a contract was awarded and field tests are underway.

RFI is also providing technical and engineering support to draft the ETCS level 2/3 system specification for the Merano - Malles line managed by the STA infrastructure manager and the first version of the technical specification has been issued.

Regarding CCSp Regional with ETCS Level 3, after two years of risk analysis and trials on the Roccasecca - Avezzano line, RFI issued a first version of the technical specification in December 2018. Work to determine the alignment, compatibility and impact between the specification and the operational rules is currently underway.

The CCSp Regional system based on ETCS Level 3 uses fixed virtual block sections and virtual track circuits so that the CCS system will use position reports with train integrity from the ERTMS onboard system via radio. This will detect the presence of a train on the track allowing all lineside signals and conventional train detection systems to be removed.

A virtual radio block section comprises a fixed length section of track, configured within the SDT logic and delimited by virtual joints and ETCS marker boards to provide the train distancing function. The virtual track circuits have the same functional logic as the electric track circuits - checking that the route is clear, immobilising switches, managing level crossing occupancy - and so must be configured in both the SDV and the interlocking logic (GdV).

The trial site comprised a 20km section between Capistrello and Civitella Roveto which includes two stations and a passing loop.

In addition, the danger point - defining a buffer zone beyond the end of authority - and the overlap are configured beyond the ETCS marker boards to allow the release speed to be calculated onboard.

SDT can detect if the virtual track circuit, virtual block sections and the overlap are clear depending on the position report with train integrity provided by a train’s ERTMS onboard system.

SDT transmits the information regarding the status of the line’s station virtual track circuits and the virtual block section to GdV to enable it to manage the route functions.

The integration between ERTMS and interlocking logic, and the removal of the majority of the physical devices from the track, permits the introduction of a new interlocking logic, which overcomes the constraints of legacy technology, enabling further traffic optimisation.

The system is designed to cope with degraded critical situations where legacy train detection systems do not exist such as the loss of the train integrity function or radio link.

The objective of the tests with the CCSp Regional system based on ETCS Level 3 without a traditional train detection system was to gain confidence with the operational and technical feasibility of the system, which introduces important innovations in rail traffic management. It also sought to test the switch-over procedures between the existing electromechanical interlocking and axle counters and the new CCSp Regional system.

The following features have been tested:

The trial site comprised a 20km section between Capistrello and Civitella Roveto which includes two stations and a passing loop. Three level crossings and the switches in Capistrello station are the field devices included in the tests.

Bombardier installed the following devices at the trial site:

The control centre was equipped with a simulator able to create virtual train movements to perform scenarios where a virtual train runs together with a real train.

To minimise the impact on existing systems, level crossings and switches, both the line and stations were interfaced to object controllers through a cable terminal parallel to the existing one. This solution allows an easy and rapid switch over between the existing interlocking and the CCSp Regional system.

Bombardier installed the ERTMS onboard subsystems with double driver machine interfaces on a Trenitalia class Aln668 train. The onboard ERTMS was installed independently to avoid interference with the existing SSC/SCMT national onboard control system and was not interfaced with the train’s traction system and the main brake pipe and so was only used in a shadow mode. The ERTMS system was configured with the train integrity function always available.

For the tests, RFI defined specific rules to identify the organisation, the responsibilities and the relationships between staff involved to ensure safety during testing and safe entry and exit from the trial site.
Testing was conducted during a blockage of the line and at a maximum speed of 30km/h to avoid the need to attend the three level crossings in the trial site.

Since the legacy interlocking could not impede a possible false command to switches by the CCSp Regional system, an agent was provided at Capistrello station to check the correct position of switches and inhibit the electric command when the train passed through the switch. The train driver was instructed to check that the level crossing area was clear before proceeding on sight.

The tests were conducted on six nights between November 20 2017 and January 17 2018 and involved:

The tests were performed under ETCS Baseline 2, which has some typical features of the Swedish regional system.

The scientific and symbolic value of the tests were very high: for the first time in Italy it was possible to run a train under ETCS Level 3 replacing the physical detection systems on the track with a radio position report together with train capability to report its integrity.

It was also possible, for the first time, to test technical solutions with a promising future, such as the use of the public TLC networks and radio transmission of controls and commands to manage switches and level crossings.

The trials also proved the effectiveness of the switch over procedure between the two systems thanks to the configuration adopted. The average time to set up the CCSp regional configuration and to retrieve the original condition was 20 minutes.

The positive results shown by lab and field test convinced RFI to go on with the project defining the operational rules and the technical specification for the CCSp Regional system based on ETCS Level 3, issued in the first draft in December 2018.

The trial site on the Roccasecca - Avezzano line resulted in an upgrade of the RFI specification for the application of the CCS system with pure (without a trackside train detection system) ETCS Level 3 and with electronic interlocking with enhanced logic adapted to ETCS Level 3 features.

Several suppliers in Italy have shown an interest in testing and implementing such a solution and RFI plans to decide new trial sites with them. However, RFI does not yet have any application in operation, and according to the RFI ERTMS accelerated deployment plan, the Roccasecca - Avezzano line will be initially equipped with the already consolidated ETCS Level 2.