Indian Railways’ (IR) operating ratio shot up alarmingly in the third quarter of 2020 ending in September. 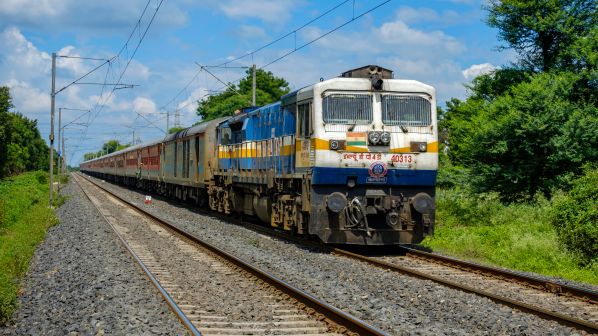 WITH IR rapidly running out of funds to meet expenses due to the effects of the Covid-19 pandemic, the Ministry of Railways was forced to solicit additional funds from finance minister, Ms Nirmala Sitharaman, to help to pay this year’s pension bills.

IR has 1.27 million employees to run 22,678 passenger and freight trains on its 67,415km network, making it the country’s biggest employer. In 2018-19, IR’s payroll was a whopping Rs 1,343.6bn ($US 18.25bn) an increase of Rs 56.49bn over the previous year. Salaries and pensions account for approximately half of operating costs, while fuel bills make up 40%. This means limited funds are available for modernisation and development works.

The urgency of IR’s rail managers to take bold reform measures - such as the decision in December 2019 to merge the eight existing cadres into a single IR management service and cut the IR board from eight to four members, is understandable. Last year, IR’s chairman and CEO, Mr V K Yadav, held out the promise of “capacity building and efficiency enhancement” through a structural reform plan. However, the results of the transformation plan have yet to materialise.

IR’s current challenges are largely seen as the outcome of the failure by political leaders and rail managers to plan or execute ideas to their logical conclusion. The streamlining of IR’s board and management was aimed at breaking down silos and unencumbering unwieldy rail bureaucracy. Issues relating to future recruitment and the chain of command remain unclear.

Niti Aayog, the Indian government’s think tank, has questioned the ministry’s earlier decision to entrust the 17 zonal railway general managers with administrative and financial powers on a par with IR board members. Rather than giving the decision a green signal on a piece-meal basis, Niti Aayog, in a recent letter to the IR board, has sought clarity about the complete restructuring plan.

Meanwhile, several top positions, including those of board member, rolling stock, and additional members, have remained vacant. “Officers are highly demoralised and apprehensive about future prospects because of the arbitrariness with which the reform measures are being pushed through,” a senior ministry official said on condition of anonymity.

“In such a climate, it is only logical to assume that big-ticket plans will be put off by some years,” says former IR board member, Mr Rajesh Agarwal.
Such assumptions are not off the mark. Highly publicised projects such as the Mumbai - Ahmedabad high-speed project, station redevelopment schemes, and the Dedicated Freight Corridors, have remained on pause in recent months, while production of coaches and locomotives has been slashed, as passenger services have remained suspended since June 2020, with just a handful of premium-fare trains allowed to run during the Covid-19 pandemic.

The private train initiative has been embroiled in disagreements between the IR board and private train operators on the proposed terms of the contract. And, after three rounds of tenders were floated, it has also been one step forward and two steps back regarding the plan for the import/indigenous manufacture of 160km/h passenger trains.

Four years since the electrification plan was conceived, there is still no clarity on how to monetise the 4000 strong fleet of diesel locomotives that have been displaced before the end of their working life. The value of the redundant locomotives has been assessed at around Rs 200bn.

In addition, IR is bound by a contractual agreement to induct 100 diesel locomotives annually over 10 years from the GE/Wabtec plant set up in 2016 at Marhoura in Bihar. “We have delivered 230 locomotives [comprising 209 3356kW and 21 4474kW] to Indian Railways and are confident of meeting targets in coming years as well,” says Mr Sandeep Singh from Wabtec India. He added that approximately 15% of IR’s network would remain diesel powered and that the Marhoura locomotives would be deployed for strategic reasons or to haul trains in difficult mountainous terrain such as India’s northeast. Nevertheless, IR has not deviated from its plan to electrify the entire network.

IR has a similarly ambitious goal to increase its share of total freight traffic from around 22% today to 45% by 2030. To achieve this, the National Rail Plan 2030 talks about increasing capacity, for example by building high-speed lines to relieve congestion on lines with heavy passenger and freight demand. However, IR has been slow on delivery.

“IR talks about the need to open up, but rail bureaucracy remains unwilling to give up the monopolistic mindset,”

The highly publicised plan to redevelop 400 stations has not taken off. Of the schemes included in the first phase, the redevelopment of Gandhinagar station has accumulated a huge cost overrun and work is nowhere near complete. Redevelopment of Surat station has also not yet begun.

Contracts were awarded for the redevelopment of Bijwasan, Chandigarh and Anand Vihar stations more than a year ago, but construction has not started. The Delhi High Court has slapped a penalty of Rs 12bn on IR regarding a claim filed by Parasvnath Builders after the contract to redevelop the Sarai Rohila-Kishanganj railway colony in Delhi was cancelled mid-way.

“IR talks about the need to open up, but rail bureaucracy remains unwilling to give up the monopolistic mindset,” says former IR board member, Mr Subodh Jain. “This is the reason that projects are getting stuck.”

IR’s response to current challenges has been defensive, at best. Following the Covid-19 outbreak, passenger services - which had been generating losses anyway - were halted. “Not all categories of passenger services are loss making,” says former IR board member, Mr R R Jaruhar. “Using the Covid-19 situation to continue the ban reveals a defeatist attitude and contains long term and adverse consequences.”

In the next three months, an entirely new railway board will be in place as the current members including Yadav are due to retire. The National High-Speed Rail Corporation Ltd (NHSRCL) will also have a new chairman, as Mr Achal Khare will retire shortly. Railway circles are therefore hopeful that with the change of top managers, IR will come to acquire a fresh direction and thrust.