This month the European Union Competition Commission will decide the fate of the Siemens-Alstom merger. The EU and national competition authorities have expressed doubts over the combination, but with powerful political forces behind the deal and concessions from the two suppliers, the decision could go either way, as Keith Barrow reports. 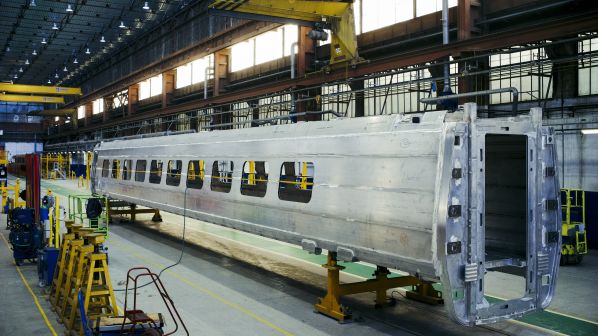 A Pendolino bodyshell on the production line at Alstom’s Savigliano plant in Italy. Alstom has reportedly offered to divest its Pendolino platform in a bid to gain EU approval for the merger.

IT is now 17 months since Siemens and Alstom announced plans to combine their mobility businesses in a “merger of equals.” At the time, financial close was expected by the end of 2018, but by the middle of last year the target date had slipped back into 2019, in part due to the complexity of obtaining regulatory approvals in multiple countries.

One of the hurdles facing the two suppliers was the need to obtain clearance from the European Union (EU) Competition Commission, which launched an “in-depth” investigation into the merger in July 2017 amid fears that the tie-up could lead to “higher prices, less choice and less innovation due to reduced competitive pressure in rolling stock and signalling tenders.”

On October 29, the EU issued a confidential Statement of Objection to the two suppliers outlining its concerns on the merger proposal. Siemens and Alstom subsequently submitted a remedy package to competition commissioner, Mrs Margrethe Vestager, on December 12, setting out how it would address the EU’s objections to the original proposal.

The proposed measures include hiving off activities in the rolling stock and signalling sectors and represent around 4% of combined entity’s sales.

“The parties consider that the proposed remedy package is appropriate and adequate,” the two companies said in a statement . “There is, however, no certainty that the content of this package will be sufficient to alleviate the concerns of the Commission.”

The EC is expected to decide by February 18 whether the proposed measures adequately address its concerns about the planned transaction.

Reuters reported on December 17 that Siemens and Alstom have offered to sell one of their high-speed businesses, quoting sources close to the merger. The report also indicates that the two suppliers are proposing the sale of most of Alstom’s signalling business and some of Siemens’ signalling activities.

Among the concessions reportedly on offer are the sale of Alstom’s Pendolino tilting-train technology to a third party, a time-limited license for the sale and production of trains based on Siemens’ new Velaro Novo platform (September 2018 p56), the disposal of Siemens’ onboard signalling business, and divestment of Alstom’s trackside signalling activities. Reuters reported on January 10 that the two suppliers have made additional concessions with a broader geographical scope in a bid to convince Brussels to back the deal.

National competition authorities have raised objections to aspects of the merger, particularly in the signalling and high-speed rolling stock sectors.

In September, the Australian Competition and Consumer Commission warned that “the proposed merger may substantially lessen competition in the supply of heavy rail signalling systems for passenger rail networks in Australia, in particular interlocking systems and ATP systems.”

There has also been opposition from antitrust authorities within the EU member states. In a joint letter to Vestager in December, the heads of the Belgian Competition Authority, Britain’s Competition and Markets Authority, the Dutch Authority for Consumers and Markets and Spain’s National Commission for Markets and Competition (CNMC) state that competition between Alstom and Siemens is a particularly important driver of cost-effective pricing and product and service innovation within the European railway sector.

The four authorities argue that the “overall loss of competition brought about by the merger would be both widespread and very significant” and question the effectiveness of proposals put forward by Siemens and Alstom for their high-speed businesses, claiming the measures “fall well short of what is required” in this sector.

“The Commission’s investigation has found that the Parties are, and have been for some time, by far the two largest suppliers of very high-speed rolling stock in the EEA, with both holding and maintaining a broad product portfolio and significant customer base, and competing very closely for tenders,” the letter states. “Barriers to entry and expansion for new or emerging players are very significant and customers have little bargaining power that could protect them against price rises. It is clear, therefore, that this is a market in which the merger raises very serious and extensive competition concerns.”

The authorities argue that such concerns can only be adequately addressed with a “very substantial remedy, typically the full divestment of one or other of the merging parties’ overlapping businesses to a suitable buyer who could recreate the competitive rivalry lost through the merger,” and they claim the proposal put forward by Siemens and Alstom has not addressed this shortcoming.

The letter also highlights anxieties over the impact on other sectors, and the authorities say the measures proposed by Siemens and Alstom “seem to suffer from serious defects that might materially undermine their effectiveness.”

The competition authorities claim it would be difficult for the buyers of the divestment packages to operate these assets with the same competitive intensity as Alstom and Siemens do at present.

The letter also expresses concern over technology transfers, which may be difficult to monitor.

“In light of these shortcomings in the remedies offered by the Parties - and the risks around their effective implementation - we consider that they should not be considered to meet the Commission’s requirements for acceptable remedies,” the letter concludes.

Even in Germany authorities fear the potential impact of the Siemens-Alstom merger on competition in the rail sector. Last month Frankfurter Allgemeine Zeitung reported that the German Federal Competition Office had written a confidential letter to Vestager confirming that it shares the EU’s concerns over the merger and the remedial measures put forward by the two companies. The letter suggests that selling Pendolino would not give a third party a foothold in the market for very high-speed trains, while the Velaro Novo license term is considered “far too short.”

While many expect Vestager to reject the deal, approval of the merger is as much a question for European politics as European law. In this regard, Siemens and Alstom can count on the backing of the EU’s biggest political heavyweights - France and Germany. French president, Mr Emmanuel Macron, and German chancellor, Mrs Angela Merkel, are eager to foster the creation of European industrial champions capable of challenging the increasing might of Asian giants on the global stage.

In this context, Siemens-Alstom is not the only merger creating waves. Just weeks after launching its investigation into the Siemens-Alstom merger, the EC initiated a separate probe into Wieland’s proposed acquisition of Aurubus Rolled Products and Schwermetall, which would create one of the world’s largest producers of copper rolled products.

Vestager’s comments were reminiscent of those she made on the Siemens-Alstom merger in July. “The proposed transaction would bring together the top two suppliers of copper rolled products in an industry that is already highly concentrated. Therefore, the Commission will closely analyse the impact on competition to ensure their customers and final consumers are not harmed.”

This highlights a broader conflict between the obligation to protect the interests of Europe’s internal market and European consumers on one hand, and on the other, the need to ensure European products remain competitive elsewhere in the world. With intense pressure to defend the former without compromising the latter, Vestager is in a difficult position.

As the clock counts down, the French government continues to press the EC to ratify the Siemens-Alstom combination, warning that failure to do so would result in negative consequences for Europe’s rail industry. “If the EC was to make an unfavourable decision regarding this merger, it would be for the wrong reasons,” French economy minister, Mr Bruno Le Maire, said in an interview with French radio station Europe 1 on January 6. “It would not just be an economic mistake but a political mistake, because it would weaken the whole European industry in the face of China.”

“European competition law is obsolete. It was created in the 20th century but today it faces the creation of 21st century industrial giants, and it does not allow Europe to create its own industrial champions.”

Le Maire says he sees no reason why the EC should oppose the merger and warns that blocking the deal “would send a signal to a conquering China that Europe divides and disarms itself.”

Merkel has called for the modernisation of European competition rules and has criticised the EU for focussing its attention on competition within member states’ markets while ignoring global market dynamics. Rejection of the deal this month would put the EU at odds with German industrial policy and could escalate tensions between Berlin and Brussels over merger rules, adding to the pressure for reform of European competition laws.

Vestager’s announcement this month therefore holds significance not just for the railway business but for European industry as a whole. Approval of the deal will be seen as an endorsement of ambitions to nurture the development of industrial champions and an indication that the EU is willing to adapt its competition policy to the realities of the global market. However, it would do so in defiance of warnings from national competition authorities, which appear to see little of merit in the merger.

Rejection of the deal could be perceived as a sign of weakness in EU competition policy, sending a clear signal to European industry - and the rest of the world - that any efforts by corporations to enhance their position in the global marketplace might be thwarted if they are deemed to interfere with market dynamics in Europe. Berlin and Paris will be just as unwilling to accept this outcome as Siemens and Alstom.

Whatever the decision, it’s going to be controversial.