The use of drones and 3D modelling in BIM streamlined the installation of a new track layout while minimising disruption to rail traffic in northern Italy. Paolo Sangiorgi, managing director and country manager of Vossloh Cogifer Italy, explains how the process works. 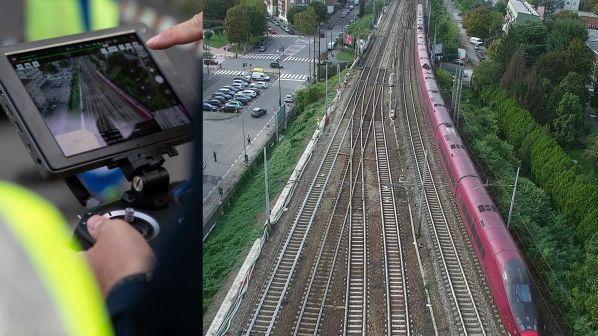 WHEN an infrastructure manager wants to renew a section of track, the traditional method of surveying the section will interrupt train services or require a track possession. Apart from the enormous planning and time effort required for a manual survey, this creates safety and track availability issues, especially on busy lines.

The 3km Seveso triple junction in Milan is an important section of railway (Figure 1) where passenger and freight trains run on six converging tracks. A high-speed train passes every five minutes on the high-speed tracks and every 10 minutes a regional passenger or freight train operates over the conventional tracks.

Italian Rail Network (RFI) wanted to upgrade this section to improve its safety, reliability and capability while minimising the impact of the work on rail traffic, and so contacted Vossloh for a solution. We suggested our Phoenix concept, which comprises the deployment of drones and the interpretation of the scanning results in combination with Building Information Modelling (BIM).

The BIM design supports both the evaluation of the best solution and the steps required for its implementation and helps the customer to decide when and how existing turnouts and track sections will be replaced.

In order to design a new generation of turnouts for the customer based on the section-specific requirements, the existing track layout is surveyed using drones instead of traditional methods. YellowScan LiDAR and digital orthophoto technology provide a complete and highly accurate track survey while taking account of the local conditions. By using drones, there is no need for staff to be on the track and train services are uninterrupted.

Integration of the up-to-date scanned data in a BIM model makes it possible to map potential interfaces or interactions between the new track and the existing infrastructure and its environment in a preliminary design. In addition, a topographic study determines the optimum track layout and its effect on the existing infrastructure and the direct surroundings. This serves as a basis for the exact alignment of the new track layout. Later in the project, drone scans and the BIM model support preparation for installation of new turnouts by providing information on the soil conditions. This information can also be used to facilitate planning site access and the supply of materials. Inspection and commissioning of the completed work is carried out based on the joint BIM analysis. In this way, the Phoenix concept creates a new level of complete transparency throughout the entire project.

A drone survey is a team effort. Experts from the client and contractor, software specialists and the drone pilot set up a provisional control centre next to the track. While RFI staff secure the track, the local police are required to guard the roads beside the line. This is because the international EASA directive stipulates that drone operation over a railway in urban areas must be completely secured, even if it does not directly affect traffic or require special protection.

To produce detailed mapping of the existing track layout, Vossloh equipped the drone with two different technologies: a YellowScan LiDAR system and a digital orthophotography (DOP) device. To enhance the positioning accuracy even further, both technologies rely on real-time kinematic (RTK) positioning. RTK uses known satellite navigation systems such as GPS, Glonass or Beidou and increases their accuracy to about 2.5cm using a stationary receiver that serves as a reference point. The combination of these technologies results in fast and simple 3D data acquisition with high levels of accuracy and resolution.

LiDAR works similarly to radar but uses a laser instead of radio waves. The laser scanner scans the environment with a pulsed laser beam and measures the time a signal needs to reach the object and return to the detector. This time-of-flight (TOF) measurement can be used for distances ranging from 1m to several kilometres. To extend the reach of the systems, very short laser pulses in the invisible near infrared (NIR) spectrum are used. In the electromagnetic spectrum, NIR follows the visible light in the direction of increasing wavelengths and covers a range from 780nm to 3µm, thereby including the IR-A and IR-B wavelength ranges.

If the drone flies at a speed of 1m/s, the resolution reaches nearly 80,000 lines/m². With a million-fold repetition of the scanning process, the LiDAR device collects individual distance measurement points in a point cloud from which 3D images of the surroundings can be computed (Figure 2). By using a special overlapping technique, where LiDAR scans for the same area are overlaid in both the X and Y directions, the required level of accuracy of approximately 1cm is achieved.

With proprietary software, the point clouds can be extracted, processed and displayed immediately after the acquisition. The automatic generation of lines of flight and the creation of .LAS files are just a few clicks away.

The DOPs are aerial photographs showing the surface free of distortion and true to scale. Special software is used to compute a DOP from 500-600 aerial photos. The DOP can be directly combined with maps or other data. Previously measured control points with a known geographic location - so-called Ground Control Points - indicate the correct georeferencing in the post-processing so that the photos can be aligned with an accuracy of a few millimetres.

The advantage of using a drone rather than an aircraft is a much higher ground resolution. When the drone flies at a relatively low altitude of 25m, this resolution is only a few millimetres so that each pixel in the image corresponds to an area of a few square millimetres. The orthophoto drone was deployed in several phases of the project.

In designing the basic layout of the new turnouts, the macro-view, which combines DOPs with the new turnout designs, allows a first alignment in terms of the general route geometry (Figure 3). In a second step, the acquired scan data are processed into a 3D model and integrated in a BIM design. This micro or detailed view visualises the new track layout with turnouts and crossovers superimposed along the existing route. Since the current track information also allows the identification of potential geometric interferences, the new turnout configurations can be fully tailored to the section-specific design and validated by the customer. This includes the final editing of the test and commissioning report on the final turnout designs.

The BIM design therefore supports both the evaluation of the best solution and the steps required for its implementation and helps the customer to decide when and how existing turnouts and track sections will be replaced. Using colour coding in the train perspective (Figure 4), the installation of the individual track components can be simulated. Technical assistance is also provided in the evaluation of possible adjustments of the track layout or the routeing of the catenary in terms of height and location. In summary, the Phoenix concept minimises overall project duration and at the same time maximises transparency for all parties involved in the project.

At the end of May 2020, one year after the first LiDAR drone scan of the entire Seveso Triple Junction section, Vossloh laid the first two of five connections required for this sensitive part of the RFI network (Figure 5). The remaining installations continued during the summer and were completed by mid-November. At all times during each construction phase, two tracks remained open for bidirectional operation. The only closure of the entire section occurred for two short night shifts during one weekend for the placement of the central cast manganese steel crossing. All turnout components were preassembled in a yard located 10km away and then transported by rail to the site together with the concrete sleepers. Every construction phase was finalised with a drone survey documenting the new infrastructure. As a result, RFI now has a complete database for its railway asset which can be updated in the future.

In close cooperation with the technical departments of RFI in Milan and Rome, Vossloh designed and manufactured a new generation of turnouts that combine high quality and fitting accuracy with low maintenance requirements and will make a decisive contribution to increasing the safety, reliability and capability of the Seveso Triple Junction infrastructure.