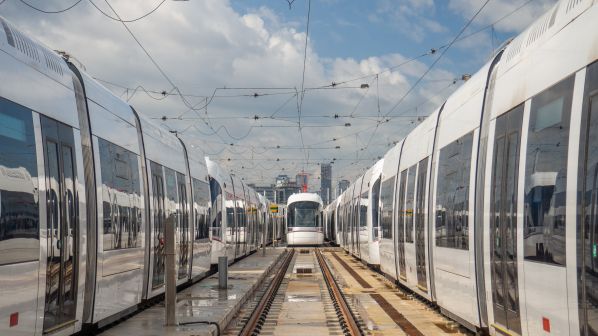 CRRC has manufactured 90 five-section LRVs for the line, which will operate in multiple.

IN a country with a history stretching back thousands of years, Tel Aviv is a relatively modern city, having only been founded in 1909. But as the city and those surrounding it have grown over the past century, so too has the congestion that now plagues it. This is being tackled through the construction of a three-line light rail network that is due to criss-cross the city, starting with the 25km at-grade and underground Red Line.

Major construction work on the line was launched on August 3 2015 with the start of excavation at the junction of Allenby Street and Yehuda Halevi Street. Civil works on the Red Line were carried out by a 51:49 joint venture between China Railway Tunnel Group and Solel Boneh Infrastructure, Israel, under a Shekels 3.1bn ($US 820m) design-build contract awarded by Tel Aviv Metropolitan Mass Transit System (NTA).

The tunnels run from a branch to the line’s depot at Kiryat Arye and from Geha Interchange, west of Shenkar station in the northwest to Manshiyya/Neve Tzedek east of Ben Zvi station where the line continues at-grade for 10km before reaching the terminus at HaKomemiyat in Bat Yam. An additional 5km at-grade section with six stations runs east from Shenkar to Petrach Tikva Central Bus Station.

With construction now complete and testing underway, NTA told IRJ during a visit on March 15 that the line is on track to open in November after Covid-19 related issues caused the delay of the original October 2021 opening date.

The project was on-time in February 2019, but a year later the pandemic forced a four-month closure of CRRC’s factories in China where manufacturing of the 90 five-section LRVs for the line was taking place. Many sub-suppliers were also affected, further adding to delays. There were additional issues transporting the vehicles, and the project also endured pandemic-related construction delays.

With construction now complete and testing underway, the line is on track to open in November.

However, testing is now underway and three months of trial running is due to begin in July.

Around half of the LRVs for the line, which will operate in multiple, have passed the two-week certification and testing process. The vehicles are shipped as two and three-section units, explains WSP rolling stock manager, Mr Ilias Konstas, before being recoupled after arriving at the port in Israel and being shunted to the depot where other systems such as signalling systems are reconnected.

“They are then transported to the light maintenance workshop where they do the static testing,” Konstas says. “Then the signalling contractor comes in to do his static testing. And then they’re ready for the dynamic test so we take them to the depot test track. We spend another day or two there, and after both contractors are ready, the vehicle is ready to go on the line.”

Driver training has been underway since November, initially using a simulator supplied by Australian-based Oktal Sydac under contract from CRRC, and now on the line.

The line is equipped with CBTC, allowing LRVs to operate at Grade of Automation 2 (GoA 2) in the underground sections, with the driver responsible for closing the doors and supervising the system. Drivers control the LRVs using line of sight on at-grade sections with the assistance of the train protection system. The train control system can also be monitored from the Operational Control Centre (OCC) at the depot, which is able to remotely stop the train in the event that the driver is incapacitated.

Due to the security situation in Israel, the train is equipped with a number of additional safety features. These include impact-proof glass and an additional cover to protect the traction equipment located in the roof of the vehicle in the event of a Molotov cocktail attack, increasing the weight of each vehicle to 50 tonnes. Digital systems such as CCTV and Wi-Fi are also designed with improved cyber security.

This requirement to focus on security goes much further than the design of the vehicles and is visible across many of the facilities needed for the line. The management, heavy maintenance and light maintenance facilities are each located in separate buildings. The OCC is also located underground behind bomb-proof concrete.

“This is a complex system, because the underground sections and the stations are also used as chemical warfare shelters with special ventilation,” explains NTA depot manager, Mr Igal Nisimov. “So it’s a whole different kind of supervision. If you have a war upstairs, a nuclear attack or something like that, in this case this room will still be working.”

“In Jerusalem when you have an accident or terror attack or something like that, it’s very complicated to replace parts. We need to ship them, fix them and then ship them back, it takes months. Here we can do this immediately on the spot.”

The data centre is located in a separate building, and the facility is supplied by two separate fibre optic cables and two power sources, along with a backup generator, in case one source fails.

Nisimov says the system was developed through lessons learned during the design and construction of the light rail network in Jerusalem, where the OCC is located on the second floor of the building. The layout has also been improved, with individual stations for staff managing the signalling, power, security and traffic control systems. Each control desk will have two operators, with a separate office at the back of the room for the OCC manager.

CRRC is responsible for the maintenance of the LRVs for 16 years but is also training Israeli staff to ensure knowledge transfer. Two maintenance facilities have been built at the depot beside Kiryat Arye station, including a light maintenance facility to allow minor regular maintenance, and a heavy maintenance workshop which includes two train jacks, a bogie cleaning facility and bogie jack.

“In Jerusalem when you have an accident or terror attack or something like that, it’s very complicated to replace parts,” Konstas says. “We need to ship them, fix them and then ship them back, it takes months. Here we can do this immediately on the spot.”

The depot has 23 tracks totalling 1.7km, three times the size of the depot for the Jerusalem light rail network.

Contracts for Tel Aviv’s Purple and Green lines were awarded in February, with preliminary work now underway across a city which is experiencing chronic congestion and high car dependency.

Alstom, bus operator Dan Transportation and Israeli infrastructure company Electra were awarded a contract to design, construct, maintain and finance the 39km Green Line, while a consortium of CAF and construction firm Shapir have been awarded a €1.015bn contract to construct and equip the 27km Purple Line, both of which are expected to be fully operational by 2027. Both lines will connect with the Red Line.

NTA awarded Metav, a consortium led by Egis in partnership with Gadish Group, a network management contract for the Tel Aviv Metro in December. The €40bn, 150km underground metro will have three lines, 109 stations (all underground) and four depots, connecting with the light rail network.

During the first 18 months, Metav will assist NTA in the development and formalisation of the project’s overall strategy related to planning, scope of work and procurement. Once that is complete, the consortium will be in charge of the management and implementation of the project until its commercial operation.

It will be some time before these projects come to fruition, but the Green Line will offer the first tangible sign of progress by the end of this year, setting Tel Aviv up for its next hundred years of growth.