The adoption of new digital technologies has transformed the way we pay for travel. Oliver Cuenca reports on how ticketing has changed in recent decades, and where it could go next. 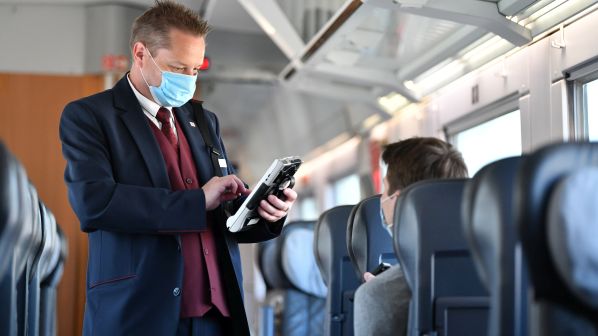 TICKETING is an often-overlooked part of the rail industry, and yet the sector has undergone some of the most profound changes in recent decades. The industry has adopted travel cards, barcodes and phone apps in a relatively short space of time, creating a world in which a physical ticket is no longer even necessary.

However, new technologies could offer further advances, enabling trans-continental travel on a single unified fare, or potentially even removing the need to consciously pay a fare at all.

“Account-based systems emerged in the late 2000s, enabling a migration from a card-centric approach to a back-office one with centralised business rules. Then during the 2010s, smartphones, open payments and other technologies have promoted the Bring Your Own Device (BYOD) and Mobility as a Service (MaaS) paradigms.”

Anarte says that although many of these digital ticketing technologies were developed in wealthier economies, with “contactless cards emerging in Europe, account-based systems in the United States, and transit open payments in Britain,” digital ticketing is now a global phenomenon.

“For instance, you can find a specific EMV [credit-card] standard for open payments in India, or there are Be-in/Be-out (BiBo) projects in Asia,” he says. “Nowadays, it’s rare to find a fare collection bidding process that does not mention open payments, and many of them ask for mobile ticketing or cloud applications, regardless of whether the transit network is in Europe, America, Asia, or any other continent.”

For Anarte, the future of ticketing will include even further shifts towards MaaS, but also the adoption of BiBo ticketing technologies which enable passengers to automatically check in and out of vehicles without having to actively purchase a ticket at all - potentially enabling barrier-free public transport.

“Smartphones and cloud computing, together with biometrics, Network Computing System (NCS), Bluetooth Low Energy (BLE) and other supporting technologies such as blockchain will continue to lead the present and future of fare collection,” Anarte says.

“Journey planning tools for passengers across multiple modes of transport will become a priority as we stop looking at single-mode trips and start looking at entire journeys for travellers.”

He also argues that social changes such as growing urban populations, environmental awareness and the desire to travel comfortably without the issues associated with private transport such as congestion will also drive further innovation in the field.

“However, technology runs faster than regulations, and there are many existing legacy systems that require more budgetary efforts to be renewed,” he says. “When it comes to MaaS, it’s not that easy to integrate transit services that are traditional competitors. In addition, BiBo has been around for a while, but technology was a barrier, and legal issues still need to be addressed, especially when it comes to biometric identification.

However, beyond just removing barriers for customers, the future of ticketing could see the rise of multi-modal ticketing that allows for seamless transfer between different modes.

“In the long-term, the adoption of mobile technology and ticketing is on the rise,” says Ms Lauren Jochum, global marketing director for Cubic Transport Solutions (CTS). “Journey planning tools for passengers across multiple modes of transport will become a priority as we stop looking at single-mode trips and start looking at entire journeys for travellers.”

The integration of mainline, commuter, metro, light rail, bus and other public transport services could offer potential opportunities for operators to collaborate. But it could also offer opportunities for transport agencies to encourage higher levels of ridership or manage crowds through custom loyalty programmes that integrate branding and advertising.

“The transport industry must consider the entire transport network holistically, including both public and private modes,” Jochum says. “For the transport industry to remain resilient in coping with increasing demand, it must be able to implement comprehensive, multi-agency, multi-modal responses to journeys.”

However, this may be easier said than done, with potential challenges to the implementation of intermodal ticketing including the involvement of multiple, potentially competing stakeholders, and the apportioning of revenue; the need for common shared technologies and the adaptation of legacy systems; the complexity of business rules; and even simply the issue of managing such a large network.

The International Union of Railways (UIC) is trying to address the technological challenges of intermodal ticketing, and aims to launch its new Open Sales and Distribution Model (OSDM) tariff distribution model from April.

The UIC says that OSDM is one of the first steps to providing seamless train ticket sales and after-sales processes. OSDM aims to simplify distribution, improve accessibility for customers and efficiency for railways and ticket distributors looking to sell their tickets internationally.

Under the old system, international fares were aggregated only once annually. However, under OSDM this can now be accomplished several times a year.

“It takes ages to aggregate the tariff and the price, upload them and then download other ones to your own system,” says Mr David Sarfatti, senior advisor for UIC’s passenger department. “But with the new platform, it could be done several times a year, which was previously only possible nationally, which will be very important for the market.”

OSDM will also support new combinations of fares. For example, the purchase of a regional ticket for immediate travel and the booking of an international service for a week later can be carried out simultaneously. The protocol combines price and sales conditions under a single standard, enabling the creation of specifically tailored fare combinations.

However, Sarfatti says the technology is not limited to just rail and could offer an easy way to offer intermodal ticketing services with other forms of public transport, including buses and aircraft.

“Operators such as French National Railways (SNCF) and German Rail (DB) and others already have busses or ferries,” he says. “This already exists in the offline distribution, so could easily be incorporated and extended to other private local companies. So, we are working very actively with the International Association of Public Transport (UITP) on this.”

However, a key aspect of integrating local public transport operators into the larger OSDM system is the compatibility of the ticketing technology in use. “We need to have the same barcodes present on the phone so the client can board the bus and then take the train seamlessly,” Sarfatti explains.
Sarfatti says the technology could also be developed to offer intermodal, single-ticket connections with airline services. UIC is currently collaborating with the International Air Transport Association (IATA) under a memorandum of understanding (MoU) signed in January 2020 for the development of multi-modal ticketing options between members of the two organisations. IATA comprises 290 airlines, representing approximately 82% of total air traffic.

Despite enthusiasm worldwide for the potential of ticketing technologies some warn that the implementation of complex systems must be carefully managed to prevent unforeseen consequences.

On February 19, an alliance of UITP, the Polis Network of cities and regions for innovative transport solutions, and the European Metropolitan Transport Authorities association (EMTA) signed a joint statement calling for a central role for public authorities in the governance of the European Union’s (EU) emerging MaaS system.

The three organisations argue that this will ensure that “digital solutions support rather than undermine the key role of public transport as the backbone of urban mobility” and that “the rights of all citizens to affordable and accessible public transport services are not diluted.”

The organisations also outline a series of principles in the statement which they say will ensure that this continues to be the case:

“Digital services integrating with the mobility system provide great leverage for more sustainable mobility,” says Mr Thomas Geier, research and policy officer for EMTA. “However, sectors in which digitisation is more advanced have shown that digital service markets are not spared from considerable deficiencies. Especially in mobility, due to the sector’s immense physical impact, such deficiencies risk undermining societal goals, creating problematic outcomes in cities and regions, if not addressed accordingly.”

The quest for ever-greater efficiency, functionality and convenience has driven enhancements in how passengers pay for railway journeys over the last 60 years. Improving access and breaking down traditional barriers between operators and modes is the next big challenge facing railway ticketing. It is likely that as these changes take hold, and technology continues to evolve, new avenues in railway ticketing and fare collection will emerge.