Shunturi Govender, Thulani Sitimela, and Siboniso Vilakazi with Transnet Freight Rail, South Africa, analyse the feasibility of adopting a 15MGT rather than a 25MGT rail grinding model to reduce the occurrence of RCF-induced defects and fractures and rail wear on South African heavy-haul lines. 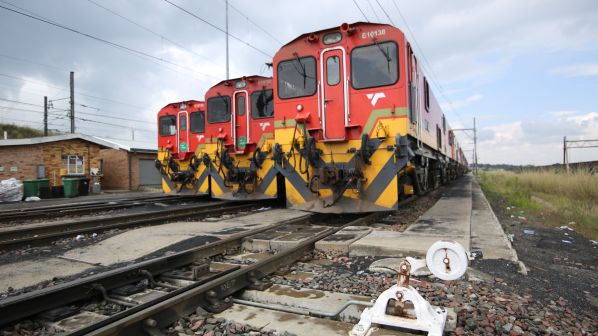 Rail wear and RCF have the most detrimental effect on wheel-rail interaction.

HIGH dynamic forces due to the high axleloads on our heavy-haul lines in South Africa create high contact stresses at the wheel-rail interface. The amplitude of these stresses exceeds the plastic limit of rails, resulting in failure. To control rolling contact fatigue (RCF) and rail wear before cracks propagate, an optimal preventative rail grinding strategy should be adopted to ensure that strain-hardened metal is removed. Longer rail grinding intervals increase the depth of the strain-hardened layer requiring more metal removal, which reduces rail life and increases the probability of failure and higher operating costs. To address these issues, a reduction in the preventative rail grinding interval from 25 to 15 million gross tonnes (MGT) should be considered.

The track on the 1055km Mpumalanga - Richards Bay coal line has a 26-tonne axleload with trains moving about 95MGT a year. Such loads together with the sliding and rolling motion between the wheel and the rail cause horizontal movement of the rail and induce dynamic forces on to the rail, resulting in residual stresses developing in the rails and wear. Rail surface, subsurface and fatigue micro-cracks begin at the location where the rail is under the most stress. With increasing load applied to the rail, the microcracks will begin to propagate resulting in rail fractures when the ultimate tensile stress of the rail is reached, and the crack has propagated to its full length before the rail reaches its intended life span. Rail fractures disrupt train operation and can cause derailments.

To avoid these problems and extend rail life, an optimal rail maintenance regime such as preventative rail grinding should be adopted. Grinding ensures that the work-hardened layer is removed before cracks initiate. Longer grinding cycles increase the depth of the strain-hardened layer and require deeper metal removal.

High axleloads on heavy-haul lines require rails with good metallurgical and mechanical properties such as hardness and toughness, achieved through heat treatment and chemical properties. Currently, our heavy-haul lines use 60E1/UIC 60 rails with 350LHT grade. These rails are produced from a hard fine pearlitic steel with a running surface Brinell hardness number (BHN) between 340 and 420. Rails manufactured from harder steels are required mainly to reduce wear and metal flow since they have a higher resistance to RCF.

Rail wear is the change in rail profile caused by increasing tonnages. Non-conformal contact between the wheel and the rail occurs when locomotives run on worn rails. Non-conformal contact increases contact stress which facilitates RCF (shelling, spalling and head checks) and plastic flow on the rail surface as well as internal rail defects. Deep-seated shelling on the gauge corner is caused by cyclic axle loading on the gauge face. These defects result in rail corrugation.

Rail wear and RCF have the most detrimental effect on wheel-rail interaction since the contact point moves to the gauge side of the rail. If preventative maintenance is not carried out, the rail profile will deteriorate causing an increase in the wheel-rail contact stress. High contact stresses increase the defect propagation rate and inherently reduce rail resilience. Without continuous and optimal rail maintenance regimes, rail defects will excessively propagate.

There are two types of grinding: corrective and preventative. Corrective grinding removes existing rail defects and corrects the rail profile but requires more metal removal compared with preventative rail grinding, which removes the metal to preserve the optimal rail profile and maintain the rail surface at an acceptable standard whilst removing micro-cracks before they propagate. Preventative grinding requires minimal metal removal and is currently used on the coal line based on the MGT method.

Rail defects such as RCF, wear, corrugation and plastic flow influence the occurrence of non-conformal wheel-rail contact. When conformal contact is preserved, the contact stresses between the wheel and rail are kept within acceptable limits to prevent defects from initiating.

Conformal contact enables a stable wheel-rail interaction and train stability whilst traversing curves and prevents hunting on tangent track. Defects such as at the gauge corner can be mitigated when preventative rail grinding occurs at recurring intervals. Furthermore, when a corrugated rail is ground it will indirectly improve the service life of the track components since dynamic loads are reduced.

The annual cost of removing rail defects on the Richards Bay coal line by cutting out the defective section of rail and replacing it is approximately Rand 14.9m ($US 935,000) while the cost of rail grinding for the 25MGT preventative model is about Rand 94m. The cost of rail defects on European networks accounts for more than 15% of the total maintenance budget.

An optimal rail grinding strategy should feature efficient rail grinding cycles to reprofile rails for optimal wheel-rail interaction with optimal quantity of metal removal per cycle. A rail grinding model according to best practice should achieve the following:

A study conducted in 2017 by Mr John Stanford, rail maintenance manager with BNSF, examined different grinding cycles to determine the optimal grinding cycle and metal removal rate. The results indicated that grinding cycles of 15MGT on curves and 45MGT on tangent track resulted in a significant decrease of rail surface defects and 98% of the track was at its optimal rail profile. The costs related to grinding for a 15MGT model were relatively low compared with other grinding models. In addition, the grinding machine utilisation rate increased by 31% while the pass per curve decreased by 38% in one year, indicating that the grinder would be able to grind more kilometres with the same resources at a lower cost.

Another study by Canada’s National Research Centre examined the crack growth rate for rail on tangent track and on curves to ensure that an adequate preventative grinding strategy is implemented. When the tonnages increase from 15 to 20MGT, the depth of the crack growth increases more rapidly for high rails on curves than for the tangent and low rails on curves. When the curve radius is reduced there was an increase in wear. This suggests that to remove minute cracks before they propagate rapidly on curves and to ensure that the optimal rail profile is preserved, preventative rail grinding should be conducted at shorter intervals for curves (mainly for curves with a high degree of curvature) compared with tangent track. Therefore, a 15MGT rail grinding model will be considered for the South African heavy-haul lines.

A comparative analysis will be conducted between the current 25MGT model implemented on the Richards Bay line and the proposed 15MGT model to calculate the feasibility and efficiency of both models regarding the grinding kilometres required, the cost and the operational down time required for each grinding model.

The required grinding kilometres for each model will be calculated using the following equation:

The required grinding kilometre will be conducted separately for curves and for tangents as they both require different depths of metal removal as per the optimal metal removal rate.

Where 8.41 = kilometres the grinding machine grinds per hour.

The total grinding cost for curves and tangents based on grinding kilometres required by the optimal metal removal rate is approximately 20% more for a 25MGT model compared with the 15MGT model. Therefore, even though the 25MGT model is less frequent, higher costs would still be incurred due to rail grinding.

On the coal line, when the grinding machine operates, total occupation needs to be granted. Total occupation is generally taken for 8 hours between sections of the rail network. The operational requirement was evaluated relating to the total grinding kilometres calculated in the previous sections. If the grinding machine works at 8.41km/h for 8 hours/day, the total kilometres that could be ground in a day is 67.28km.