Agreement reached on next steps for Berlin rail projects

Two rail projects in Berlin have moved forward following an agreement on what to do next. 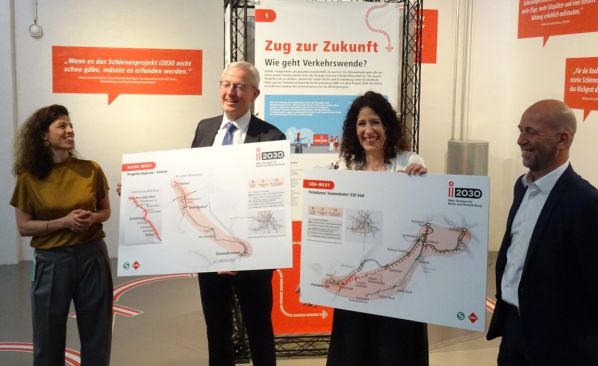 THE state of Berlin's mobility senator, Ms Bettina Jarasch, and Brandenburg's infrastructure minister, Mr Guido Beermann, have agreed on the next steps for the so-called i2030 corridors Potsdamer Stammbahn and Prignitz-Express.

The Potsdamer Stammbahn will be an electrified, double-track line for regional trains between Griebnitzsee west of Potsdam, Zehlendorf and Berlin Potsdamer Platz. The project will involve reopening the line from Griebnitzsee via Düppel-Kleinmachnow to Zehlendorf and rebuilding the line north of Zehlendorf. Trains would also call at Rathaus Steglitz and Schöneberg where new platforms would be provided alongside the existing S-Bahn stations.

Four trains per hour will operate on the line. However, not all trains can be routed through the north-south tunnel serving Berlin Main Station, as there is insufficient capacity. Instead, it is being examined whether trains could also be routed via a reactivated Schöneberg curve to reach the Berlin inner ring line towards Berlin Ostkreuz. This would require the line between Schöneberg and Treptow to be electrified and converted to double track. Trains would stop at Südkreuz and possibly Neukölln or Hermannstrasse.

Regarding the Prignitz-Express project to the north of Berlin, the Velten - Neuruppin section will be expanded as the first sub-project to enable two trains per hour to operate on Lines RE6 and RB55 between Hennigsdorf and Neuruppin by 2026. Prignitz-Express trains will be routed via the northern outer ring line to reach Berlin as reinstating main line tracks alongside the S25 S-Bahn line has been rejected due to the high estimated cost.

In addition, a 10-minute-interval service on the S-Bahn between Schönholz and Hennigsdorf is planned with a new station at Berlin Borsigwalde. This would improve the rail connection between Hennigsdorf and the Berlin districts of Tegel, Heiligensee and Reinickendorf, the Urban Tech Republic commercial area and central Berlin. An extension of the S-Bahn to Velten is also proposed.