The 120km route currently has a maximum line speed of 40km/h. 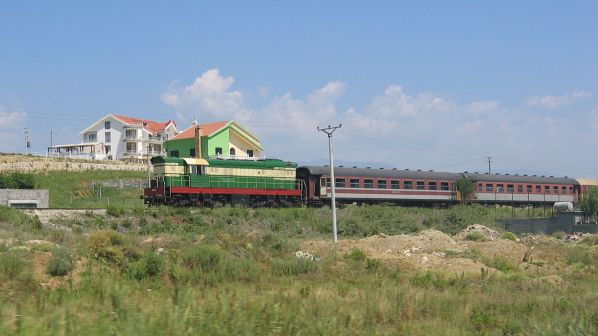 THE European Bank for Reconstruction and Development (EBRD) has announced it will provide a €62.9m sovereign loan for Albanian Railways (HSH) to support the rehabilitation of the Vore - Hani i Hotit line from near the Albanian capital Tirana to the Montenegro border.

The €267m project to upgrade approximately 120km line is expected to be co-financed by the European Investment Bank (EIB) and the European Union (EU) through the Western Balkans Investment Framework (WBIF).

The line was built in stages, with the Vorë - Laç section opening in the early 1960s followed by the section from Laç to Hani i Hotit in the 1980s. Track is in poor condition due to the lack of maintenance, and the line currently has a maximum operating speed of 40km/h, dropping to 20km/h in some sections due to frequent unauthorised level crossings. Most of the formal level crossings are also unprotected.

The line’s signalling system was badly damaged during regional unrest in 1991 and 1997, and is almost non-existent. The drainage system is heavily affected by erosion and sedimentation, while station buildings and platforms are in disrepair. Bridges have deteriorated, they are narrower than the 6m width required by EU Trans-European Transpot Network (TEN-T) standards and would not support future electrification.

An earthquake on November 26 2019 damaged a bridge over the Ishmi river. Prior to the earthquake, passengers were served by a single return service with limited passenger numbers, while freight services were organised on an ad hoc basis with long journey times.

The project will upgrade the rail infrastructure to meet ERTMS requirements, including railway safety and 100km/h to 120km/h line speed. The upgrade will also create conditions for the development of passenger and freight services, and develop a multimodal and intermodal transport in Albania and the wider region.

The design takes into consideration the future electrification of the railway line, with the  loading gauge widened to 6.6m. The design provides also for future rail links to Shengjin Port and Kosovo from Lezhe 2 and Mjede stations, respectively.

The project will improve Albania’s connectivity, economic development and regional integration, as the line is part of the Western Balkans Core Network and a potential future extension of the TEN-T network in the region. The project will also support the development of more sustainable transport by promoting modal shift from road to rail.

The upgrade will not require significant property acquisition, as there are only short sections of new alignment, which are located close to the existing railway.

EBRD announced in September last year it was increasing its investment in rail networks in the western Balkans, comprising Albania, Bosnia and Herzegovina, North Macedonia, Montenegro, Serbiaand Kosovo, to help improve connectivity in the region while also addressing climate change.