THE Italian city of Bologna opened the 5.1km Bologna Express peoplemover, which links Bologna Central station, via Lazzaretto, with Marconi Airport, on November 18. 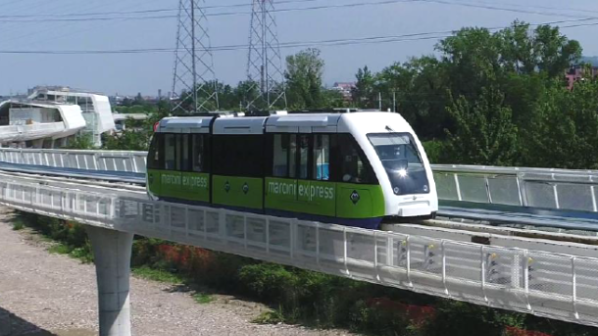 The line has a single elevated guideway with a passing loop in Lazzaretto, near the control centre and a maintenance depot.

The line has three stations and offers an end-to-end journey time of 7min 30s, with a capacity of 570 passengers per hour per direction. The shuttle is expected to carry one million passengers in its first year.

The line was originally scheduled to open on March 7, but was delayed due to the coronavirus pandemic. A reduced service with restricted vehicle occupancy will initially be operated due to social distancing requirements and the low demand for air travel.

The line has three stations at Bologna Central, Lazzaretto and the airport.

Services will be operated by a fleet of three 18m-long three-section rubber-tyred driverless trains with a capacity of 70 passengers each and a maximum speed of 80km/h, supplied by Intamin Transportation, Switzerland. The trains are equipped with solar panels, which are expected to reduce energy consumption by up to 35%, potentially reducing CO2 emissions by up to 300 tonnes annually.

Two trains will be used at a time for regular services, but during periods of high demand, two of the vehicles can be operated as a coupled pair. A fourth vehicle is being considered in future to accommodate growth in demand.

Construction of the Marconi Express line began in October 2015 and was completed in 2019, for a total cost of €125m. The main civil works contractor was Mate, Italy, with Intamin providing the guideway, vehicles, power supply and platform screen doors for the project. STS Bologna carried out engineering design, Iosa Ghini Associates was the lead architect, and Steer served as a consultant.