MILAN’s 15km Blue Line (M4) metro project has reached a critical stage following the breakthrough of the first tunnel-boring machine (TBM) at the site of the planned Parco Solari metro station on September 9. 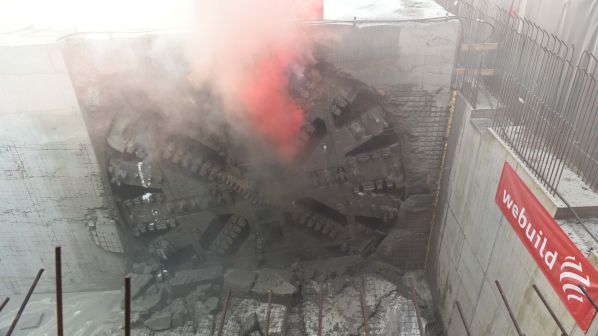 The breakthrough at Solari was attended by officials including Mr Giuseppe Sala, the mayor of Milan. The second TBM is expected to arrive at the site in the next few days.

The two 9.15m diameter Herrenknecht TBMs began work on the twin-bore tunnel on the 9.2km central section of the line in early 2019, travelling west from Tricolore.

According to Webuild, which heads the MM4 consortium executing the project as part of a public-private partnership (PPP) with the City of Milan, the two TBMs have excavated around 620,000m2 of earth since they began work. MM4 also includes Hitachi and Sirti.

Following the breakthroughs, work will begin to install rail, electrical systems and signalling systems in the tunnels.

The project comprises three sections: east, central and west. The east and west sections were bored using smaller 6m diameter TBMs. Work on the east section was completed in 2018, and the west section in mid-2019.

When completed, the M4 line will serve 21 stations and run from Linate city airport to San Cristoforo, with an end-to-end journey time of 30 minutes. The line’s initial section between Linate city airport and Forlanini station is expected to begin operation in spring 2021, with the entire line planned for completion by 2023.

The line is expected to significantly alleviate congestion and pollution in the city, taking an estimated 16 million vehicles off the streets per year and reducing CO2 emissions by around 30,000 tonnes annually.

For detailed data about metro projects from around the world, subscribe to IRJ Pro.