Two organisations are now bidding to be development partner for Phase 1. 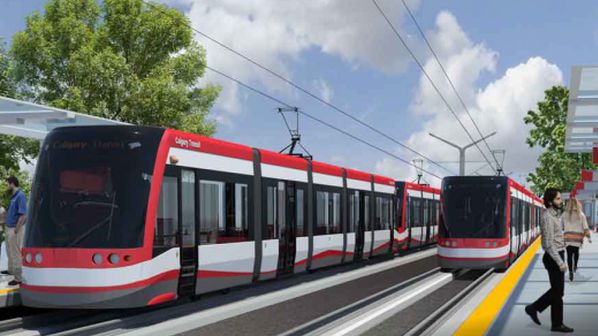 An impression of how the Green Line's Ogden station will look when completed and the CAF Urbos 100 low-floor LRVs are operating.
Photo Credit: Green Line LRT

AN important step forward in Calgary’s plans for a new 46km Green Line to add to the city’s existing 59km light rail network has been made with the Request for Qualification (RFQ) process for Phase 1 progressing to the Request for Proposal (RFP) stage.

The Canadian government is providing $C 1.53bn ($US 1.22bn) for the Green Line, Calgary’s largest ever infrastructure project. The province of Alberta and the city of Calgary are also contributing $C 1.53bn and $C 1.59bn, respectively.

Phase 1 involves the construction of the 18km core Shepard - Eau Claire section of the Green Line – the most technically complex part of the route – which in the future will be extended both to the north and to the south.

Phase 1 of the project, which is following a a Design-Build-Finance (DBF) model, has 13 underground and elevated stations, three park and ride facilities and an LRV  maintenance and storage depot.

Bow Street Connectors and City Link Partners have now been approved by the Green Line project board to move on to the RFP stage of the tendering process.

“With extensive competition due to record investment in global transit, to have attracted their collective expertise is a great endorsement of the project,” says Mr Don Fairbairn, Green Line board chairman, who also described the two organisations as “two very strong proponent teams”.

The RFQ submissions were evaluated against technical capability, approach, experience and financial capacity. As Bow Transit Connectors and City Link Partners advance through the procurement process, they will be introduced to local contractors and suppliers to explore project opportunities.

The RFP result will be released by the end of the third quarter of 2022, with a development partner selected in early 2023.

CAF has been awarded a contract to supply a fleet of 28 Urbos 100 low-floor LRVs for the Green Line. The contract includes support for operating and maintaining the new fleet and an option to purchase additional vehicles.

When the whole 46km Green Line is completed it will have 29 stations, and like Calgary’s other light rail lines will be powered entirely by green electricity generated by wind power. It will run on a mixture of dedicated tracks, elevated sections, underground tunnels and street running sections.