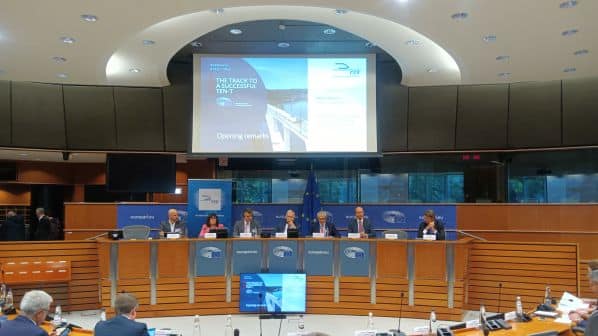 THE Community of European Railways and Infrastructure Companies (CER) held a policy debate at the European Parliament in Brussels on October 11 to discuss the revision of the Trans-European Transport Network (TEN-T) Regulation.

The European Commission (EC) published its proposal for revising the TEN-T Regulation at the end of 2021, and MEPs are now due to consider it in detail.

The CER debate brought together Europe’s state-owned operators and infrastructure managers, MEPs and the EC to consider the implications for infrastructure, passenger services and the freight sector.

The debate was chaired by CER executive director, Mr Alberto Mazzola. “Overall the proposal is positive,” he said. But he warned that the legislative proposal should not be watered down and that financial support must be provided.

“Without adequate additional funding, the European rail sector will not be able to provide the additional capacity to drive modal shift,” Mazzola said.

The scope of the revised TEN-T programme was outlined by Mr Herald Ruijters, acting deputy director-general at the EC’s Directorate-General for Mobility and Transport (DG Move).

“We need a high-speed network across Europe,” Ruijters said, “because we need to tell EU citizens that they can travel by rail and not air.”

He suggested that six hours was an acceptable journey time for high-speed rail, given the time taken to reach airports and complete security checks when undertaking the same journey by air.

Trenitalia CEO, Mr Luigi Corradi, pointed to the success of the Frecciarossa high-speed service between Milan and Paris despite a journey time of between six and seven hours. “The train is full every day, with an 82% average daily load factor,” he said. “I don’t have the same in Italy.”

“People want to travel by train and more high-speed is needed,” Corradi said, adding that his dream was to make rail the first choice for travellers. “That is what we are discussing today is all about.”

The deployment of ERTMS would be obligatory on the extended core network and the comprehensive network, the latter due for completion in 2050.

CER estimates that completion of the core network by 2030 would cost €500bn, with €1500bn needed to complete the comprehensive network by 2050.

So far, the European Union’s Connecting Europe Facility (CEF) has a budget of €25.8bn for TEN-T projects in 2020-27, while €15bn would be available from EU Cohesion Funds and between €15bn and €20bn from the Recovery and Resilience Facility.

Ruijters stressed that stability of funding was crucial to completing the TEN-T programme. “If we build stability through this new TEN-T proposal, then all the other partners will jump onboard.” Future funding partners for TEN-T infrastructure partners could include the European Investment Bank and pension funds.

The policy debate was hosted by French MEP, Mr Dominique Riquet, who is co-rapporteur on the proposed revision of the TEN-T Regulation. A rapporteur is appointed by the relevant committee of the European Parliament to draft a report on a legislative proposal, and in doing so may consult with relevant experts and stakeholders.

Rapporteurs are also responsible for drafting compromise amendments and negotiations with shadow rapporteurs. Once adopted at committee level, the report is then voted on in a plenary session of the parliament.

Riquet described TEN-T as “the very soul of the European Union,” given its role in facilitating the free movement of people and goods. “The new TEN-T Regulation is the most powerful tool to establish that infrastructure network on an EU scale.”

But he also recognised that its passage through the legislative process would not be any easy one, expecting resistance from member states to initiatives such as improving cross-border links and accelerating the deployment of ERTMS.

“We have to be a bit harder,” Riquet said. “Goodwill is not sufficient.”

Ruijters also believed that resistance would be encountered on these issues. “We will fight with member states,” he said. “I think the debate will be extremely difficult.”

But the ambitious goals of the revised TEN-T programme should not abandoned in the name of compromise, said Mr Clemens Först, CEO of Rail Cargo Group, the freight business of Austrian Federal Railways (ÖBB).

“Don’t water the proposals down, especially when it comes to capacity as that is what is limiting us at the moment,” he said.

On the crucial issue of capacity, he welcomed the TEN-T requirement for a minimum of two paths per hour for freight trains up to 750m in length, and that the P400 loading gauge should be provided.

“ERTMS is the right thing to do for all sorts of reasons,” Först said, such as increasing route capacity and improving safety. He believed it was important to learn from the history ERTMS deployment, where “millions of euros” had been spent for no apparent improvement in interoperability.

Spanish MEP and TEN-T shadow rapporteur, Ms Isabel García Muñoz, also stressed the benefits of ERTMS is helping the EU meet its target of doubling rail’s share of the freight market by 2050.

“We have to make member states understand that it adds value,” she said.