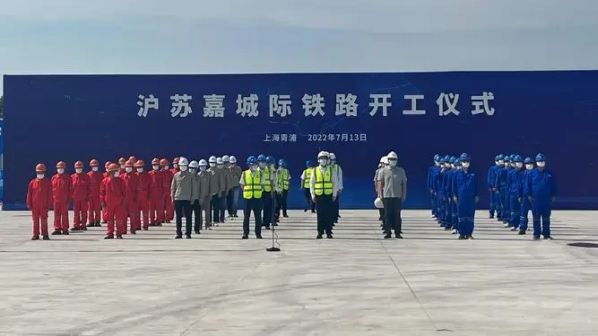 WORK has begun on two sections of the Shanghai - Sujia inter-city railway totalling 55km, following a ceremony on July 13.

Construction is underway on the 20km Jiashan - Xitang and 35km Jiaxing - Fengnan lines, with work expected to take six years to complete. The Jiaxing - Fengnan line will run from Jiaxing South Station, a bi-level underground station covering more than 30,000m2, which in future will become an interchange with regional and national services.

The 65.6km Jiangsu section is estimated to cost Yuan 24.08bn. The line intersects with the under-construction Shanghai - Suhu railway, the planned Tongsu - Jiaxing - Ningbo railway, and the existing Shanghai - Hangzhou high-speed line, and provides a connection with Shanghai metro Line 17, Line 13, Suzhou metro Line 4, and the planned Line 10 in Suzhou.

The start of construction comes as China National Railway (CR) pushes on with a rapid expansion of its high-speed network, despite the state railway rapidly accumulating vast debts.

China’s government announced on May 31 that it would allow CR to issue another Yuan 300bn in railway construction bonds, despite the railway reporting a Yuan 49.8bn loss in 2021 with passenger numbers down 29% from pre-pandemic levels at 2.53 billion.

However, investment has slowed in the first half of 2022.

A briefing published by the National Bureau of Statistics in June showed that national fixed asset investment between January and May 2022 was Yuan 205.96 trillion, a 6.2% year-on-year increase. However, investment in rail infrastructure was down 3%, although spending on railway, marine, aerospace and other transport equipment manufacturing increased by 14.4%.