Introduction of driverless operation on the 59km Pink Line makes Delhi Metro the fourth largest automated system in the world. 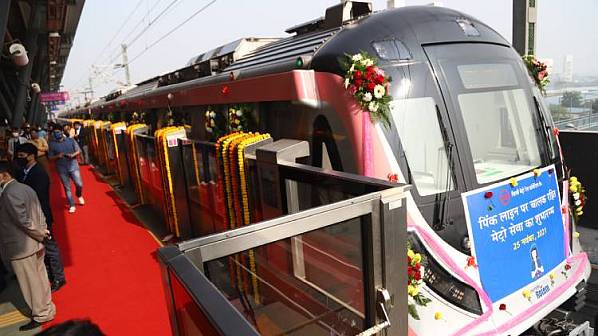 AUTOMATED operation of the 59km Pink Line between Majilis Park and Shiv Vihar, covering 38 stations, on the Delhi Metro was launched on November 25.

Initially a train operator will remain onboard “to instil a sense of confidence and assistance,” DMRC says.

The Delhi Metro now has 97km of automated railway and is the only driverless operation in India. DMRC says that driverless operation has already proven to be beneficial on the Magenta Line, where automation was launched last year. Reliability has improved due to self-testing carried out before service which DMRC says removes human error.

Further extensions of driverless operation are planned on the Pink Line, which will be extended by 11km from Majlis Park - Maujpur in 2023, and a 29km extension on the Magenta Line from Janakpuri West - RK Ashram Marg, as well as the 24km Aerocity - Tughalakabad Silver Line.

When these are complete, DMRC will have 160km of driverless operation.

Puri stated that pre-pandemic the Delhi Metro carried around 6.5 million passengers per day. Now with 100% seating and only 30 standing passengers allowed per coach, following easing of Covid-19 restrictions he said he expects ridership to increase in the next few weeks.

For in-depth data on metro projects across Asia, subscribe to IRJ Pro.