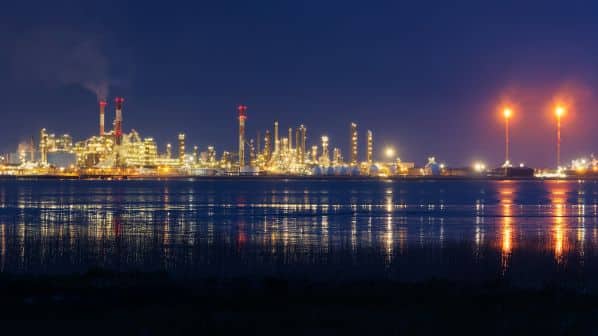 FRENCH infrastructure manager SNCF Network has bought into a service 4.5km of new electrified double-track railway at Donges between Nantes and Saint-Nazaire.

It has been built to replace an alignment that carried 1.5 million passengers a year but ran close to France’s second-largest oil refinery.

The refinery at Donges covers 350ha and is operated by TotalEnergies. It is classified as a “high threshold” site under the EU Seveso III directive on the control of on-shore major accident hazards involving dangerous substances.

The new alignment is used by 60 trains a day, including 14 TER regional passenger services. The bypass project has included the construction of a new, fully accessible station with park and ride facilities that is 5 minutes from the centre of Donges - closer than its predecessor which was 20 minutes away.

Two road overbridges and four rail underbridges have been built as part of the project.

In addition, freeing up the former alignment will allow those industries formerly operating close to the railway to reorganise their sites.

Project management of the Donges bypass was undertaken throughout by Systra, starting in August 2016 with preliminary studies. This was followed by land acquisition, diverting utility networks, monitoring the consultation and public inquiry process, and producing renderings of the new line for local residents and authorities.

Construction supervision began in 2020 and over a period of two years required particular attention to be paid to site safety in close proximity to the refinery.

As well as being trained at the Systra centre in Poitiers to work on the operating railway, contractors also had to meet the requirements of TotalEnergies regarding the risks of working close to petrochemicals and the use of personal protective equipment (PPE).

Construction took place on a 24h basis, involving over 400 nights, three short possessions and a 14-day shutdown of the existing route to bring the new bypass into service.

The project will be completed in spring of 2023 with the end of work to remove the old track and the completion of environmental mitigation measures.

A total of 17ha over 17 sites has been dedicated to environmental measures including a new bat shelter, habitats for protected species of reptiles, birds and mammals, and the creation or rehabilitation of wetlands.

The new railway has been blended into the landscape by the creation of seven earth embankments close to nearby roads, planted with tall trees such as oak, ash and willow to act as a visual screen and encourage local biodiversity. A total of 450 trees were planted during the project.

“The Donges rail bypass is a major project for Systra France’s teams,” says Systra France CEO, Mr Didier Traube. “It is a first insofar as SNCF Network has entrusted us with complete project management, including all disciplines, on a section of line in operation.”