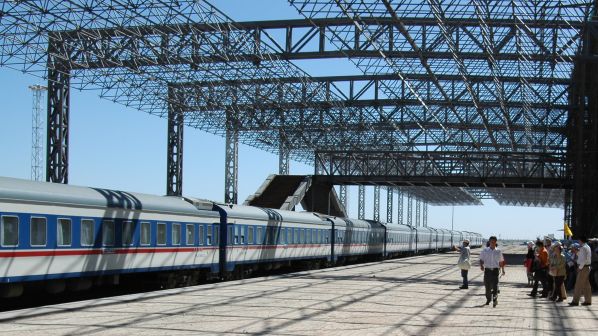 Dunhuang is one of the stations on the 671km Dunhuang circular railway.
Photo Credit: Wikicommons CC 2.0 Lapin Lapin

The Dunhuang railway serves the provinces of Gansu, Qinghai, Inner Mongolia, and Tibet. It runs from Liugou in the north, via Dunhuang, Axe, and Subei, crosses the Qilian Mountains and enters Qinghai province.

The Dunhuang railway is classified as a national I-level electrified single-track railway with provision to lay a second track. The line has a design speed of 120km/h and has capacity to carry 36 million tonnes of freight per year.

The northwest region is rich in natural resources such as salt, boron, potassium, coal, and petroleum, and is China’s primary source of lithium-ore, mirabilite, potassium salt, magnesium salt and asbestos.

The new railway is an important link between the Qinghai - Tibet line and the Lanxin and Lanqing lines to form the first ring railway in northwest China. The new line will create a second major international route to central Asia, and will shorten the distance by rail between Xinjiang and Tibet by 1100km, saving nearly 10 hours.

Known as the Desert New Silk Road, the Dunhuang railway serves 14 national-level scenic spots such as Mogao Grottoes in Dunhuang, Suoyang City, Yumen Pass, and the Great Wall of China. The Gobi Desert has always restricted the development of tourism along the route, so the Dunhuang Railway will become what CR describes as a “golden tourist line.”